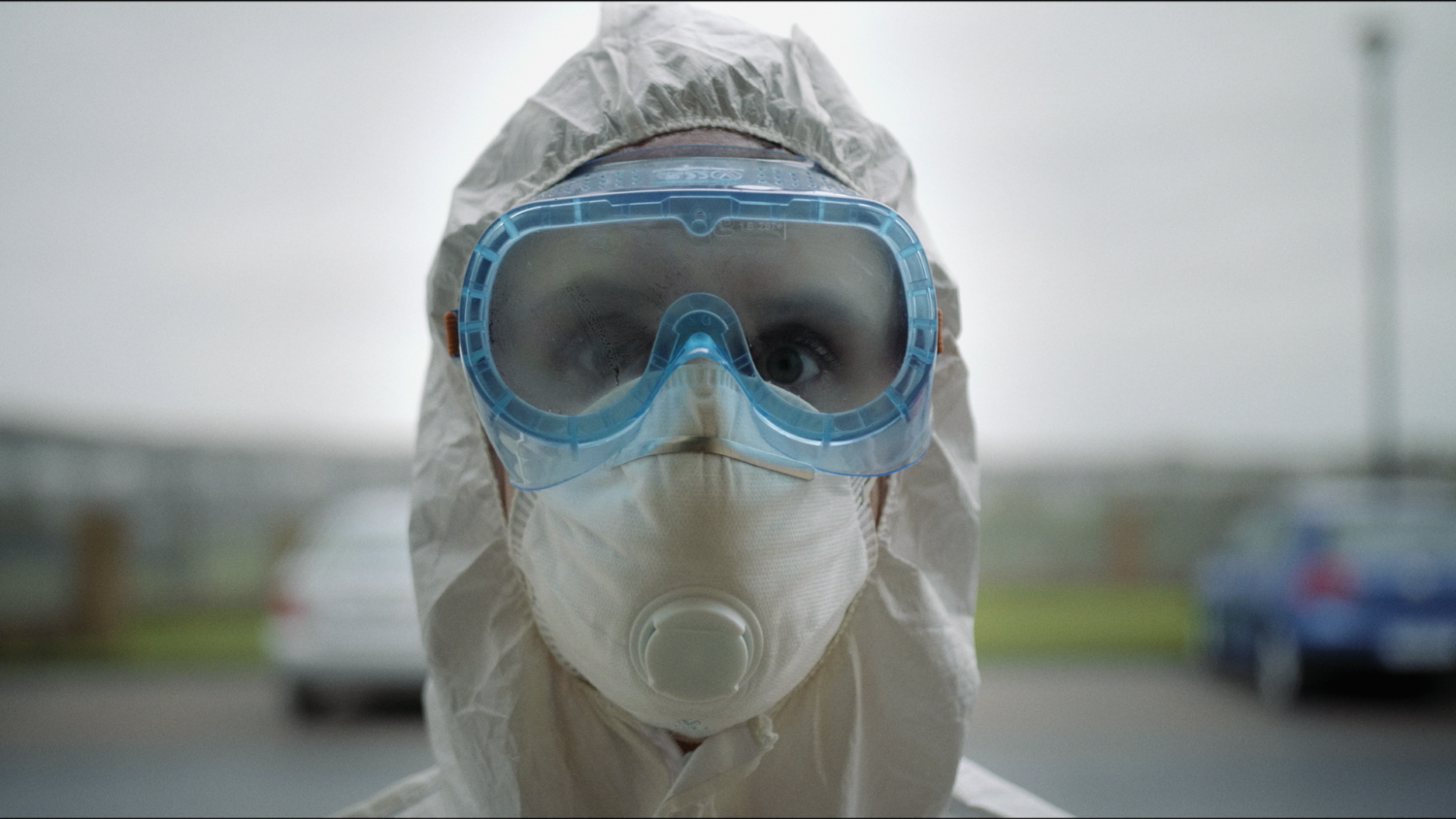 Every time I experience the studio-perfect presentation of the BBC, juxtaposed with the grainy overexposure of a webcam, I move between spaces. The degrees of image quality in broadcasting, Zoom meetings and home schooling have become a textured terrain: time no longer runs parallel to escalating visual presentation (HD, UHD, 4K) but to spatial distribution. This prompts me to reconsider moving-image art less as a flat image, and more as a visual space where I need to position myself. The ‘Irish Short Reel Series’ is the second film series to be streamed from the Contemporary Irish Arts Centre in Los Angeles (CIACLA). This year’s online screening programme – curated by Matthew Nevin, Ciara Scanlan, Jenny Minniti Shippey and Jenn McGuirk – features 21 short films from Irish filmmakers.

Hazardous Materials, directed by Brian O’Brien, at first seems a product of COVID-19, opening with a woman jogging alone by a desolate seaside promenade in makeshift Hazmat gear, comprising white painting overalls and plastic goggles. But Nora (Molly O’Mahony) isn’t in lockdown; she goes to work, where colleagues mingle without limitation, yet regards them with both dread and desire. Nora is in a lockdown of one: living alone in a bedsit with plastic sheets covering the doors, compulsively governing her life through sticky-notes: “Before you leave: Keys / Purse / Phone / Meds” or “Talk to at least ONE person a day.” A co-worker, Rachel (Carla Keeney), coaxes Nora to a house party, but the encounter proves traumatic when her flimsy suit begins to rip and tear. Nora makes the human connection she craves only when Rachel stops trying to get her out of her protective gear, but rather helps her to repair it.

Hazardous Materials is not a product of ‘the pandemic’, but of 2018. However, its inclusion cannot be ignorant of its relevance today, and our viewership is irrevocably altered from what it might have originally been. Once, we would have viewed wearing protective clothing in public as anti-social, but now our viewing is foregrounded by an experience that recognises empathy and social responsibility.

It becomes apparent that Nora’s Hazmat suit is symbolic – it isn’t really there. Among the naturalism of the photography, and sound design (emphasising the quotidian hissing of the office and faraway traffic), Nora’s suit is an alien presence that does not belong. It is an artefact, a device interpolated into the film to describe the unobservable mental pathology of a person who is trying to remain safe.

Mental health is addressed in a more consistent dramatic form in Dam, directed by Conan McIvor, which depicts two teenage boys (Conor Doran and Cillian Lenaghan) visiting a remote reservoir, fuelled by a carryout. The conversation is stunted and evasive, in the way that male conversations often are, but reveals in short bursts what has brought them here: the recent suicide of a mutual friend. “Is it catchin’?” remarks one, introducing an ominous fatalism that drives toward the later suggestion: “Maybe Enda had the right idea.” As they drink more, one notices his friends’ intent lurching over the precipice of the dam, grabs him by the hand and throws him back to safety. “Wish we were made a’ concrete”, he says, as he sits still, holding the hand that saved him. Dam moves from a portrayal of the emotional concealment of young men in our culture, to the dam figuratively bursting, enabling them to confide in each other in the privacy afforded by a concrete landscape.

In Gustav, directed by Ken Williams and Denis Fitzpatrick, a man struggles with a song he just can’t get out of his head. Will (Sean T. O’Meallaigh) falls asleep with the first few bars of Amhrán na bhFiann (the Irish national anthem) playing at the close of the television station and wakes up the next day with a mysterious tune in his head. Will’s boss overhears his idle humming and identifies the song as Jupiter, from The Planets by British composer, Gustav Holst, remarking that “it’s good to see somebody appreciating culture”, leading Will to take pride in his inexplicable refinement. Unable to sleep that night, he faces himself in the bathroom mirror hearing a disembodied voice, ‘Gustav’, speaking to him, and the escalating music begins to drown out his own thoughts. He attempts to physically force Gustav ‘out’ of his head, through washing, inserting Q-tips into his ears, showering, then screaming.

Will manically sings aloud the main chorus of Amhrán na bhFiann, and at completion, the music stops. This cathartic event is previewed earlier, when Will is shown holding a magazine, entitled ‘Delayed Gratification’, suggesting that it is the anthem that has somehow tormented him. Will is freed and the couple return to bed, bringing the film to a close, as Will’s partner begins to hear the tyrannous Gustav herself.

Is the logic of Gustav like that of Dam, contained within the spectacle itself, internally consistent? Or does the seemingly gratuitous device of Will’s hallucination jumping to his partner, instruct us to disbelieve and investigate? If it is the former, it trips over itself by carelessly squandering a portrait of a psychotic episode. I choose to see a metaphor: parenthesising Will’s struggle with the ‘delayed gratification’ of Amhrán na bhFiann can be seen as a subtle gesture towards the still evolving constitutional positions in Ireland, in the context of whichever of our numerous crises you may care to place it.