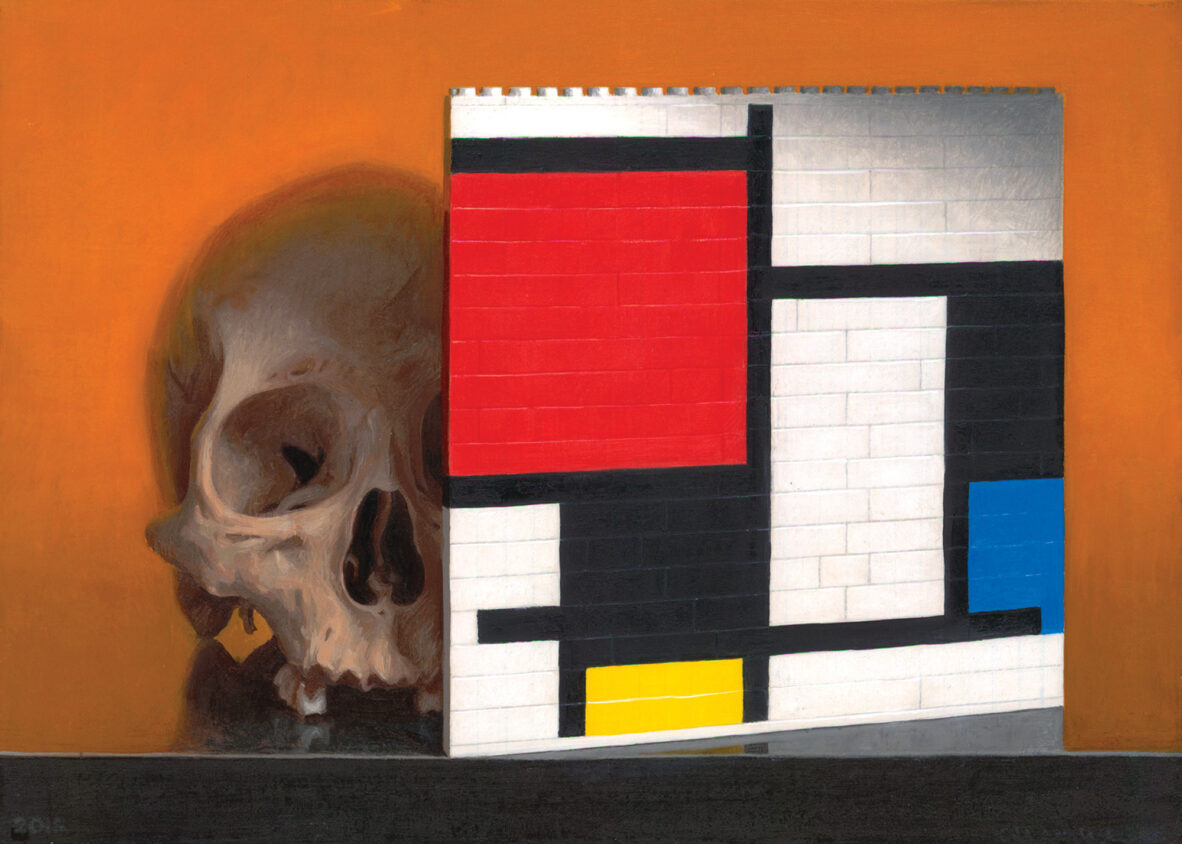 MARY CATHERINE NOLAN PROFILES CONOR WALTON AND THE DEVELOPMENT OF HIS ART CAREER.

Up the hill behind the main street of Wicklow town, Conor Walton lives with his partner and their three children in a former convent. As a result of the building’s previous role, the house has an unconventional structure, albeit with a slightly conventual feel. You enter a wide foyer off which lead the reception rooms, while the bedrooms are organised linearly down a corridor. At the end there is an entrance to the annex, a large, two-storey-high box-like space created from four of the eight original bedrooms which Walton knocked together and now uses as a studio.

This is probably the dream of many artists: to have their studio not just close to home, but attached to it, so the daily ‘commute’ doesn’t even involve going outside. For Walton, this has the added benefit of allowing him to balance his professional and personal life to the optimum. Once he has brought the children to school, he can paint for as many hours as family commitments permit.

The workspace has everything you would expect of a working artist’s studio: storage for paints and other tools; music; paintings on and against the wall; easels, one with a jacket for a current portrait commission casually slung over it. In another corner there is a small ‘stage’ with all the elements of the still life he’s also working on, lit by strong light. Walton can take anything from a couple of days to several years to complete a piece. He also likes to revisit former works, to ‘improve with practice’ either by overworking them or by re-creating them, so he’s using a photo of the still life as previously rendered as a further aid.

Walton has been painting and drawing for as long as he can remember. He studied at NCAD (Joint Honours Degree in the History of Art and Fine Art, 1993), where he encountered some resistance to the fact that he wanted not just to paint, but to learn the techniques and discover the tools that have been used by painters over the centuries. Feeling that he hadn’t really achieved this aim, he decided to look further. Receiving a number of commissions to paint portraits on foot of his end-of-degree work helped him financially to do so. He headed to the University of Essex, where he studied art history (MA in Art History and Theory, University of Essex, UK, awarded with distinction), out of interest, but also with the view that he would probably have to teach to supplement his income. At the end of this degree, he spent six months at a studio in Florence but the difficulties he was encountering in his desire to follow what others perceived as an outdated path resulted in his seriously considering giving it all up. Fortunately, help came from an unexpected corner. His father, who had often queried whether it was realistic to try to be a full-time painter, stepped in, sorted out a studio for Walton, and gave him a stipend to get him on his feet.

So he was back in the studio, now he just needed to get his work out there. A contact from college suggested the Ib Jorgensen gallery in Dublin. Walton brought his work there, was taken on, and had four solo exhibitions with them over a period of twelve years. However, as Walton points out, there was a downside to this. “With a solo exhibition every three years, there were usually two lean years for every fat one, and the year before a solo show was usually very lean as I had to hoard the work.”

What’s more, he could see that the rapid increase in the prices of his work was unsustainable. “Around 2003 I realised that my prices were a product of the Celtic Tiger boom and I could see the bust coming. So I consolidated my prices at that point and slashed them when the bust came in 2009, at the time of my last show with Ib Jorgensen. My aim at that point was to continue earning a living from painting at all costs, and I feared that, given the grave situation, Irish art sales would simply cease. But lower prices made it easier to exhibit outside Ireland and I had five European solo shows in as many years. These weren’t sell-out shows; I was lucky to sell 25%, but the other 75% could be moved on to the next venue. With a solo exhibition every year I found my cash flow was better than during the Irish boom years and more frequent events generated more publicity. What’s interesting here is how it goes against the common wisdom that artists should never drop their prices. The decision to drop my prices was among the best career moves I ever made.” A key element in his independence has been the portrait work. Walton doesn’t see himself as a portraitist, rather as a painter whose work includes portraits. But he admits that the commissions have been both financially beneficial and self-perpetuating. He is generally sought out, though he also applies for commissions in instances where that approach is appropriate. However, this doesn’t mean that the portraits are a side-line. For Walton they present a specific challenge, that of getting beyond the persona to the person. On his website he writes eloquently about his relationship with sitters, pointing out that most often portraits are commissions of people in public roles, at the pinnacle of their careers. For him as a painter the interest is in getting to the person and the passion behind that public image, that robe or those insignia.

The Sky Portrait Artist of the Year (2014) is one instance however where the impetus came from Walton himself. He thought it would be interesting to enter, applied and was accepted. He saw the format, where the artists have to paint a sitter’s portrait in just four hours in public view, as a challenge, and prepared by getting people into his studio over the course of a week to have their portrait painted in that short time. The ‘performance’ aspect also appealed. Painting for Walton is a form of communication, and he is not afraid to explore any means available to engage with his viewers. He will talk about his pieces, do demonstrations and post images of works in progress on Facebook. The irony of the Sky experience is that as far as he is aware, it hasn’t had any impact on his career, though he does remember being asked, “Was that you I saw on TV?”!

Walton’s European exhibitions came through direct contact from galleries. He now has work in the US as well, a development which came about after he was mentioned in an article in a New York arts magazine – the writer had found his work through the internet. He has an exhibition in San Francisco coming up, and will give art classes and demos over there to fund his trip. On the other hand, he says residencies are not on the cards for him while his children are young.

Walton is fascinated by the tools of his trade. He would love to be able to grow the flax to weave the linen on which he paints. More realistically, he’s intrigued by the notion of making his paints, rather than simply squeezing them out of a tube. And yet this harking back to basics is balanced by a firmly twenty-first-century exploitation of technology. He uploads images to his Facebook page regularly, and it was through this medium that he got the sitters for his Sky practice portraits. His time-lapse video of himself painting a bunch of grapes has got over 40,000 hits. He uses the Internet to source materials that he can’t get in Dublin from Germany, Britain and elsewhere. In 2007 Walton bought a large format scanner which allows him to record his work digitally at the highest resolution and quality; he is “very concerned about recording and archiving as my paintings sell all over the world and I’ll never see many of them again after they leave the studio.”

Walton paints, which is considered outmoded by some, and, what’s more, his paintings could be called representational, though he would argue forcefully against them being labelled photo-realism. His subject matter veers from the classic – the bunch of grapes – to the seemingly kitsch – a Toy Story figurine – often on the same canvas. “I paint things that I care about, that concern me: everything I do as a painter is driven by strong personal beliefs and convictions.” Much of Walton’s work appears to be dystopian in outlook, and he freely admits that he is troubled by the world we live in. But, he says, though “I’m what some people call a ‘doomer’; I believe we’re headed for ecological and civilisational collapse…my state of mind is generally cheerful, I love what I do, I think it’s a great time to be a painter.”

Walton’s way of living is orderly, structured, even conventional. His studio is meticulously organised, and he works daily, solidly – with a family to support, he cannot afford to wait around for inspiration to strike. He wants to work in the ‘old ways’, but is no Luddite. He is happy to talk about his work, indeed he is keen to ensure that it is understood. He is open to new experiences, such as the Sky programme, but doesn’t chase indiscriminately after opportunities. Walton is that rare creature, a successful artist leading a balanced life. With commitment, support and a little luck, it can be done.