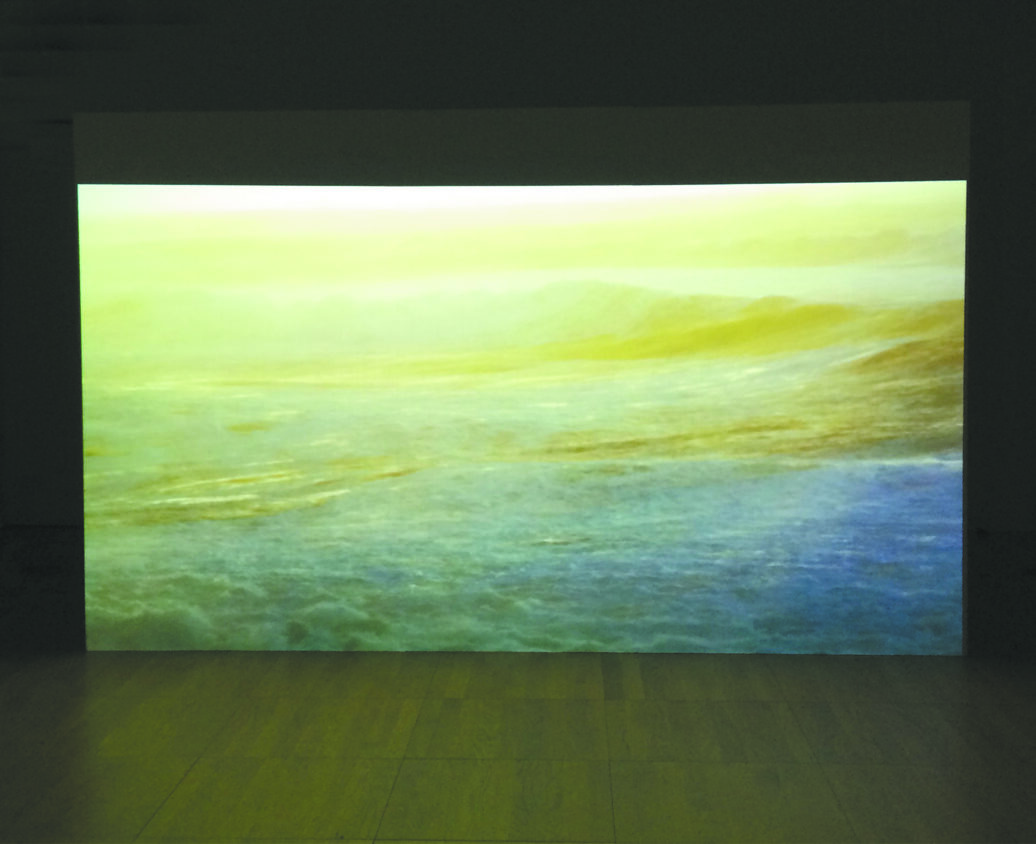 The Luan Gallery appears to float over the River Shannon like a perfectly formed geometric ice block. The site and architecture of the building allude to fusion between natural and environmental conditions – concerns that are further elaborated in Mark Garry’s ‘An Afterwards’, currently installed across the Luan’s gracious exhibition spaces.

A native of County Westmeath, Garry often spent time in Athlone as a child, and this exhibition presents new works that attempt to forge connections between kinship and place. The cool intensity of Garry’s diverse body of work – which includes lithographs, oil paintings, video and Giclée digital prints – is given nuance by the nostalgic inclusion of (admittedly excellent) amateur artworks by his parents. This intimate familial gesture also functions to support a Beuysian assertion that everyone is an artist.

The eponymous centrepiece of the exhibition, An Afterwards (2017), is a surging, rainbow-like structure composed from multilinear threads held in tension by aluminium braces. The aerodynamic piece evokes ethereal sensations as a spectrum refracting light above the heads of viewers. This installation exemplifies Garry’s familiar sculptural approach, while channeling the natural world and its climatic states. Art that gives us direct physical sensations and moves us emotionally helps us understand the world in a direct bodily way. According to Danish-Icelandic artist Olafur Eliasson – who is best-known for his immersive sculptural installations that harness elemental materials such as light, water and temperature – this “felt feeling” has the power to mitigate the numbing effects of information overload, inciting us into action and motivating us to turn our thinking into doing. [1]

On encountering Garry’s work in the past, I have felt this too. His artworks enable new experiences of nature and help us to sense something phenomenal that we recognise as not unfamiliar. With his spatio-temporal installations, Garry offers refreshing ways to engage with and feel the beauty of the world. Another piece that achieves this is Afterglow, a double-sided glass frame set into a triangulated walnut bracket. Behind the glass is a volcanic stream of powdered pigment, which forms a pyramid of densely-layered, effervescent colour. Garry recreates this work for each exhibition. The piece glistens with its own temporality, like a flower preparing to wilt.

All of the artworks shown in this exhibition express Garry’s formative experience of the rural, while also conveying a profound relationship with the classical and romantic traditions of landscape art. Garry acknowledges the influence of nineteenth-century German Romantic painter Caspar David Friedrich, particularly his depictions of stoic contemplative travelers in solitary relationships with sublime, bleak and dramatic landscapes. Friedrich’s influence is keenly felt in Darondo, Garry’s emotionally complex photographic diptych in which the statuesque figure of the late William Daron Pulliam – a 1970s funk/soul singer from San Francisco – gazes out from a high window across a forested landscape. The image is tinted and mirrored to suggest a hallucinogenic daze. Conversely, a series of new oil paintings, Landmass II – VI, propose ways of looking into nature, rather than gazing across its terrain or admiring its scenery. Using an abstract, Colour Field approach, the artist explores layers of resonant colour, achieved through successive staining and the pooling of paint. Scraping and erasing reveal underlying substrata of contrasting pigments which conjure micro-topographies and fractal landscapes.

Manifesting a similar approach towards the subject matter of seascapes, North of the West (2017) is a new single-channel moving image work developed in collaboration with cinematographer Padraig Cunningham. Recorded at Mullaghmore – an exposed peninsula on Sligo’s Atlantic coastline – the film depicts scenes of turbulent, foaming water, evocative of Russian filmmaker Andrei Tarkovsky’s haunting portrayal of a sentient ocean in his 1972 film Solaris. Gustave Courbet’s monumental 1870 painting, The Wave, also comes to mind, when the camera zooms out to reveal a tormented, glowering sky in a dyadic relationship with the sea. This hypnotic piece is adequately projected within the space; however, it could benefit from future screenings at a larger, more cinematic scale, as I feel its enigmatic drama could be more persuasively communicated in a fully immersive setting. Supplementing the film is a musical score entitled Drift, which evolved out of a collaborative performance in Horseshoe Bay – a natural amphitheater on Sherkin Island off the west coast of Cork. A vinyl disc is poised to play on a record player, which gallery visitors are invited to activate if desired. Music-making is an important strand of the artist’s practice. According to Garry, music generates entire networks of relationships and is fundamental to how we experience the world and each other. [2]

While Garry’s installations are the beating heart of this exhibition, his two-dimensional pieces, including photographs, painting and etchings, serve to elaborate on the experiential aspects of his sculptures and moving image works. The sensorial and physical experience of installation allows us to transcend cognition and trigger our capacity for action – something that is increasingly urgent in the face of climate change and potential ecological demise. ‘An Afterwards’ addresses such topics in subtle, discerning and relevant ways.