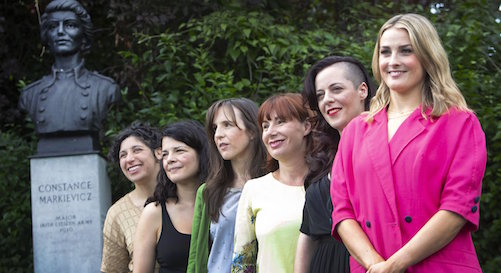 Minister for Culture, Heritage and the Gaeltacht Josepha Madigan TD, announced the first recipients of the Markievicz Award, a new bursary scheme for artists, so-called to commemorate the 100th anniversary of the appointment of the first female cabinet minister, Constance de Markievicz.

The Award Scheme is an initiative of Minister Madigan under the Decade of Centenaries 2012-2023. The Arts Council oversaw administration of the award scheme and received a total of 107 applications under the scheme earlier this year. The award winners announced today by the Minister are Sibéal Davitt, Isadora Epstein, Claire Kilroy, Louise Lowe and working in collaboration are Annemarie Ní Churreáin, Kimberley Campanello and Dimitra Xidoous.

The bursary scheme both honours Countess Constance de Markievicz – herself an artist – and provides support for artists from all backgrounds and genres in producing new work that reflects on the role of women in the period covered by the centenary commemorations and beyond. The Arts Council provided robust support to the Department in developing the scheme and delivered the Awards in a very professional and timely manner, and was an invaluable partner in the process.

Future awards will be made each year to up to five artists or writers (either individual artists working alone or in collaboration with others) to a value of €20,000 per individual or group.