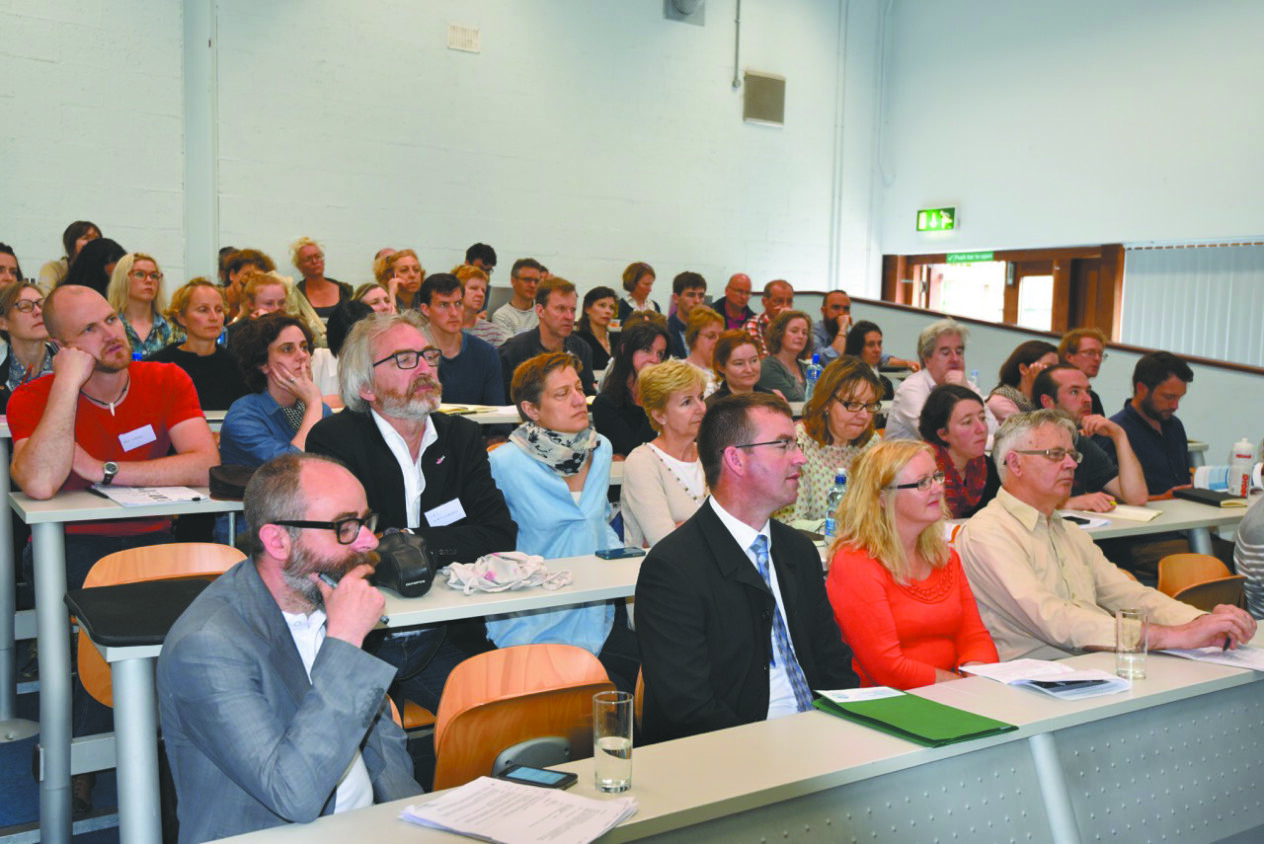 What starts to happen when artists, architects, landscape architects, farmers, practitioners and researchers from all around Europe meet to discuss rural life? This June, in Letterfrack, Connemara, an event was held to find out. Three Irish universities (University College Dublin, Dublin Institute of Technology and Galway Mayo Institute of Technology) gathered together 65 researchers, practitioners, teachers and advisors, all engaged with rural life and interested in its future, from 30 different organisations and 10 different countries, for exchange of ideas and experience.

“We do not belong to those who have ideas only among books. It is our habit to think outdoors – walking, leaping, climbing, dancing, preferably on lonely mountains or near the sea where even the trails become thoughtful.” (Friedrich Nietzsche)

The primary purpose of this conference was to explore possible futures, opportunities and challenges for rural milieus in twenty-first-century Europe. This meeting of minds had several aims, however, one of them being to cause some kind of convergence between various strands of the design community and the rural community itself. We thought it would be a good start for a group whose ultimate purpose is to imagine viable, productive and lively rural opportunities.

By gathering together attendees with a wide range of experience, and spending each day debating a particular question or theme, we hoped to encourage new dialogues across disciplines. By making the space and taking the time to immerse ourselves in place – walking, talking, thinking, looking, tasting and seeing – we hoped to create an exchange of knowledge and ideas about rural landscapes, lifestyles, production, design and culture, looking at how best to sustain rural places.

Intense exchanges took place in the formal setting of a lecture theatre (3 mornings: 24 plenary presentations, 3 evenings: 9 keynotes), but unlike many academic conferences, the possibilities for informal discussion and exchange also abounded. Lunch, teas and dinner were served in the village’s Ellis Hall, thanks to local chef Derick Healy and his team. Participants spent their afternoons leisurely foraging on the shore, tracing watercourses, visiting farms or simply walking and talking. All were helped by the unexpected sunshine! Holding this conference in a rural setting was important. Organised as a collaboration between ourselves and Deirdre O’Mahony from GMIT’s Centre for Creative Arts and Media (CCAM), this was the third in a series of events held under the name ‘AlterRurality’. The first was held in Fribourg, Switzerland and the second in London. These events were ARENA projects, an international network that exists to promote research in architecture and allied disciplines across Europe.

GMIT’s Letterfrack National Centre for Excellence in Furniture Design proved the perfect setting for a conference on rurality, as the village has an extraordinary history of rural development, in which the school buildings play a significant role.

The conference kicked off with Pieter Versteegh’s (Ecole Spéciale d’Architecture, ESA Paris) keynote lecture offering an alternative description of rurality in which a provocative list of presumptions are inverted, or as Pieter put it, “viewed through a mirror”.

In addition to invited keynote speakers, 24 papers were chosen for oral presentation, with 24 more made into posters and displayed in Ellis Hall, which is owned by Connemara West. Short presentations succeeded one another in response to specific themes. The sessions and the succession of papers were chosen as counterparts to each other, in order to expand the field of view as far as possible. While some talked of real places and things, others talked of the metaphysical and of transformation. We all talked about time: past, present and future.

Outstanding presentations included that of Dr Ciara Healy (Lecturer in Art, Department of Art, University of Reading) and Adam Stead (visual artist) in a collaborative performance in which correspondence between teacher and student were read aloud. Titled Already the world: A Post-humanist Dialogue, their letters were concerned with ecological and environmental ways of knowing in socio-agricultural and metaphysical modes. With Healy’s help, Stead sought to understand the socio-political and ecological impacts of industrialisation and consumerism on agriculture and rural communities in Britain and Ireland.

In Bows, Buildings and Experimental Archaeology: A Journey from Norway to Dublin Through Bowmaking, Stephen Fox, an experimental archaeologist and PhD student at UCD, described how both questions and answers can arise through making. Fox is an expert in Viking archery and bow making. Having spent the summer of 2015 working in a reconstructed longhouse museum in Lofotr, Norway, he is currently investigating Dublin’s Viking architecture, its raw materials and construction methods through the active building of an authentic type 1 Viking house at UCD’s Centre for Experimental Archaeology and Material Culture.

In the following presentation, Digitally Fabricating Rural Wood Constructions, Professor Urs Hirschberg of TU Graz’s Institute of Architectural Media transcended 1000 years to promote sophisticated digital fabrication technologies, the building of bespoke timber structures in rural areas and, conversely, the showcasing of special timber designs in urban contexts. He demonstrated both the viability of high-tech firms operating from rural locations and the possible revival of craft in the digital age. TU Graz’s IAM works with local industry partners to push the boundaries of timber fabrication, teaching future architects and fabrication factories about the amazing possibilities of the digital tools.

Andrew Freear’s description of Auburn University’s famous design and build programme left us wondering why we can’t all do the same thing! Known for its ethos of recycling, reusing and remaking, Rural Studio provides hands-on educational experience while assisting an underserved population in west Alabama’s Black Belt region. The studio’s philosophy is that everyone, rich or poor, deserves the benefit of good design. Students work within the community to define solutions, fundraise, design and, ultimately, build remarkable buildings. In 25, Rural Studio has built 150 projects and educated more than 600 ‘citizen architects’.

Dr Aine Macken-Walsh, researcher with Teagasc, astounded the audience by her proposition that governmental policies of the past 25 years have largely failed to support Irish farming and fishing families. Funding, she argued, has created a ‘project class’ that has benefitted a few, but been ignored by the majority.

Her design research project instrumentalises rural China’s specific administrative, social and spatial conditions to explore rurality as a spatial question. It proposes a spatial framework for China’s rural territory in an attempt to inverse the power of the city.

The point of the walks was to be outside, to breathe fresh air and to walk and talk. Aided by unusually low tides and bright sunshine, Rory Keatinge led wonderful walks along the shore, taking us to his secret locations to collect cockles and mussels, before helping us clean and prepare them for dinner. Rory has foraged for food along the coast of Letterfrack since his childhood, a passion that undoubtedly contributed to his choice of profession in fisheries management.

In her booklet The Water Glossary, artist Carol Anne Connolly gathered together Irish terms that describe water, essentially reproducing a descriptive landscape in words sourced from old texts as well as from a diverse range of people including fishermen, farmers, weather forecasters, scholars and poets. Connolly read aloud from her lexicon in the Irish language while we admired the view, the sounds of water and her words.

Michael Gibbons, one of Ireland’s leading field archaeologists and a storyteller, took us on a walk to the far and not so distant past of the hills, pointing out rocks and patterns in the landscape, traces of ancient settlements and tombs that indicate animal enclosures and field systems. He also identified more recent burial grounds and abandoned cottages dating from the Famine.

‘Fieldwork Letterfrack 2106: AlterRurality3’ built on the experience of two earlier ‘ARENA’ conferences. Held in a rural locality, the event remained intentionally small. It brought together a range of disciplines, teachers, practitioners and researchers from Ireland and beyond, with the aim of encouraging informal debate and exchange across disciplines. It widened participation to include the community voice with the aim of (starting to) overcome the barriers that still separate academia from practice. We believe that this conference is a step in the right direction, and a move towards greater collaboration between the many institutions, practitioners and academics that are engaged in rural life and interested in its future.

Sophia Meeres teaches at UCD. Her research is connected to the transformation of landscapes, the recognition and conservation of rural lands, practices and traditions.

Dominic Stevens is an architect and lecturer in the Dublin School of Architecture DIT whose works and practice is often rurally located.

Images: Attendees at the ‘AlterRurality’ conference; Attendees on one of the walks in Connemara