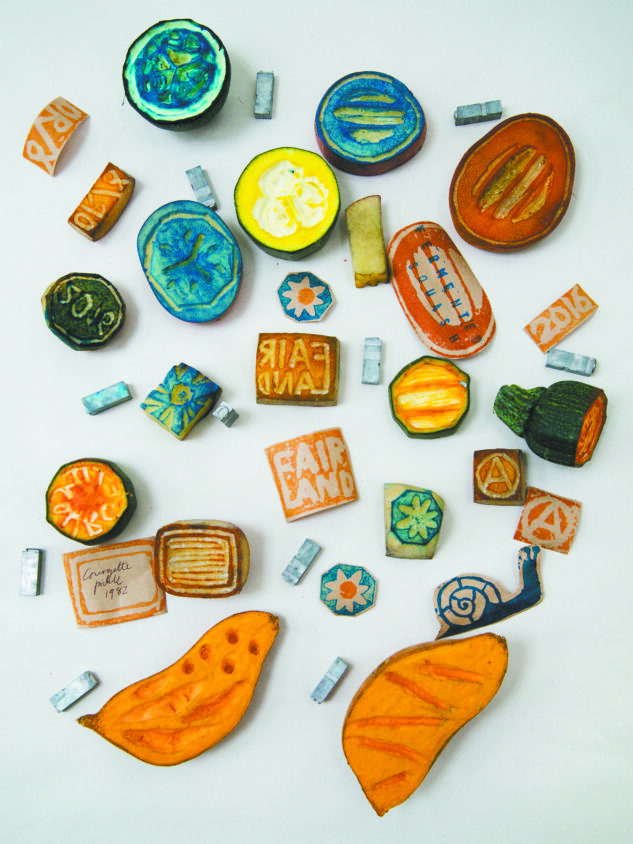 JANICE HOUGH OF IMMA INTRODUCES THEIR COLLABORATIVE PROJECT ‘A FAIR LAND’, WITH GRIZEDALE ARTS, BASED IN THE LAKE DISTRICT.

On the first outing to Grizedale Arts in spring of last year, Helen O’Donoghue (Head of Engagement and Learning at IMMA) and I found ourselves driving the entire circumference of the Lake District. After four hours of driving, which should have taken two, we were barely holding it together in the car as darkness fell over the rural pastures of Cumbria. Our failure to locate this peripheral centre led us to discover that there were two Grizedale Arts here. The one we were looking for was in Lawson Park and of course we had followed the prominent signage for the wrong one. After a wrong turn going up the mountain and the squelchy softening of the terrain under the wheels of the car, we reluctantly made the phone call to Adam Sutherland (Director of Grizedale) to assist us back down a dirt track teetering on the edge of a mountain. After this death defying stunt we were warmly welcomed and presented with some of Grizedale’s many culinary delights to help us recover from the ordeal.

Over the following days the splendour and intrigue of Grizedale revealed itself in many ways. The converted farmhouse previously owned by Ruskin is peppered with household items of historical and cultural significance. There is no conventional art on the walls; instead it presents itself through the hand-painted dining table, the fabric on the re-upholstered chairs, the hand-drawn wallpaper located throughout, the filing technique in the library, the crockery, the dressing gowns (with Ruskin references hand sewn onto the back of each) and the pot that pours the tea – the list goes on. The website explains that “the Collection is ‘live’, being periodically augmented with new purchases and commissions, and diminished through inevitable losses and breakages”.

The experience brought me to consider the various ways that we’ve worked with artists at IMMA and how we could expand this remit to channel more of these everyday applications of creativity. Of course, part of Grizedale’s subversive appeal is that losses and breakages are an institutional faux pas. The five curatorial styles used to decorate the house were conceived as a strategic set of rules to ensure that visitors can at least partially relate to an aesthetic within this eclectic environment. As custodian of the Grizedale experience Sutherland could easily pass the day discussing the significance of each item with obvious passion, humour, intelligence and a pinch of irreverence thrown in for good measure. Stepping outside we came upon a shed where Laurie Provost’s Turner Prize work Wantee (2013) was commissioned with Grizedale and built with the Coniston Youth Club. Lawson Park is dotted with various sheds, including a number of hermit huts, though luckily solitary confinement is not a compulsory elemental experience.

Following a walk/talk on the various challenges and triumphs of farming and growing on this particular terrain, we were promised a trip to the local village of Coniston. In the village we visited the unmanned Honest Shop at the Coniston Institute which is stocked with crafts and products made by locals. It offers a refreshing opportunity for direct trade with the community in contrast to the predictable options populating this tourist haven. We then stepped in to the self sufficient library, which was designed by Liam Gillick, though the books it contains didn’t appear to reflect his influence. A visit to the Ruskin Museum next door to the institute relayed the significant influence Ruskin has had on how Grizedale connects with the wider world through craft, education, creativity and nature. Our immersion in everything Ruskin was interrupted when we came upon the new extension dedicated to the Bluebird K7 and Donald Campbell, throwing up opposing perspectives on how communities opt to prioritise histories – a mashup of hero glamour and social thinker.

The two and a half day trip to Grizedale was the perfect primer to envisage what is coming our way for the summer of 2016 at IMMA. ‘A Fair Land’ will be the culmination of more than a year of discussions, development and research. The aim is to bring together a creative-led society in order to collectively construct various components that represent a village in IMMA’s courtyard, running from 11 to 28 August 2016. Radicalism and reinvention are two prevalent themes running through the programming for ‘A Fair Land’. Sarah Glennie and Adam Sutherland have a history of working together as curators, having realised the fantastically titled ‘Romantic Detachment’ over a decade ago. This was a rural/urban swap that brought the Lake District to PS1 New York, so Adam and Sarah are well versed on the impact, abundant generosity and resonance a project like this can generate for everyone involved, acting as a creative catalyst and fusing friction.

When Grizedale were invited to take up a mammoth residency at IMMA, culminating in this significant presence and activation in the courtyard, there was an alignment of aims. It is the perfect way for the museum and the residency to become part of an alternative system. For IMMA, it’s also a window onto other aspects of culture and creativity which require greater visibility and support through institutions, as well as a chance to recalibrate what can potentially evolve from IMMA’s unique context. In this ambitious project many of the elements of running a residency will become a public gesture. It’s contrasting geographical and cultural perspectives provide the spark and bounce to bring this international collective of artists and creatives together at IMMA with Grizedale.

The village of ‘A Fair Land’ will comprise an extensive straw bale field in which a glut crop of marrows will be grown. We will endeavor to use the crop to its maximum capacity for edible and product-based resources. Designed by Karen Guthrie and Public Works, and constructed under the expert guidance of Eoin Donnelly, this element of the project will utilise straw for both its agricultural and architectural features. The architectural collective Nos Workshop will design a scaffold framework facilitating communal activities such as vending, workshops, a restaurant and talks-based activities. Schools of reinvention will interweave with these active work spaces to facillitate situations where contemporary conditions around living, education and creativity in the everyday can be explored and workshopped. Functional products such as tables, chairs, spoons, bowls, wallpapers, bricks, publications, relaxation areas, workwear and consumables are all currently in development through Grizedale Arts and IMMA’s residency studios to populate, activate and create ‘A Fair Land’.

Even within a city you can be on the periphery. As a flagship organisation in Dublin IMMA has a commitment to this project, which brings us back to mediations on how mental and physical space can work, how creativity can be explored and manifested, and how connections can be made with both deliberate and accidental audiences. Instigated as a research project for product development, Deidre O’Mahoney’s play A Village Plot, performed on the front lawn at IMMA, has provided great insight. It’s clearly a project that breaks down barriers, stops people in their tracks and taps into an everyday vernacular that captures the unsuspecting passerby to experience and enjoy art from an angle they may not have previously considered. If this observation is anything to go by, August is likely to be a polemic experience for IMMA and its public. There will be constant daily activities to welcome visitors and groups to connect with the project. Sweet Water Foundation from Chicago are worth looking out for; they are the real life, day to day embodiment of renewal, reinvention and the commodity of creativity.

Closer to the event keep connected via IMMA’s website and social media platforms for updates on the daily schedules for talks, workshops, performances and food events, all coming together and culminating in ‘A Fair Land’. See you there.