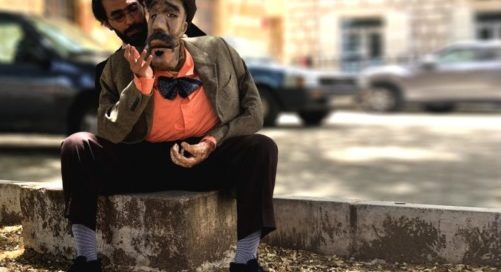 Lismore Castle Arts have announced visual artists Aram Wahhoud as the recipient of the inaugural Stableyard Studio Award. This award aims to support artists in their practice, and mainly to provide space for artists who have had difficulty in finding a space since the pandemic. The award covers the rent and bills of the studio.

Aram Wahhoud resettled in Ireland a year ago. He was born in Syria and spent around eight years in Lebanon as a refugee. He is a visual artist, graphic designer, performer, and puppeteer, creating paintings, sculptures, performances and interactive puppet shows. He founded two independent projects to produce visual artworks as well as to arrange many developmental workshops that were focusing on wellness and self-expression during his residency in Lebanon.

He has worked in many developmental projects with several NGOs in Lebanon like AL-JANA; those projects dealt with developing and enhancing the skills of children/ youth. Ettijahat- Independent Culture and Goethe-Institut have funded one of his puppet shows. Since arriving in Ireland, he has been recognized as a professional visual artist by Visual Artist Ireland and became a member of Union Internationale de la Marionnette UNIMA.

On 11 October – the last day of the season at Lismore – there will be an open studio event to celebrate the Gardens, Gallery and Aram’s work.

Lismore Castle Arts, a not-for-profit initiative, was founded in 2005 and is committed to the presentation and promotion of contemporary visual art in Ireland.