I walked into the Highlanes Gallery to experience Margaret Corcoran’s solo exhibition, ‘A Further Enquiry, Love & Independence’, with a certain excitement, as it was the first gallery I had entered since the imposition of COVID-19 public health restrictions. It felt uncanny to be in cultural space after months of restricted movement. It was not just the physical indicators of difference – the yellow and black public health signage, one-way system, plexiglass barriers, the presence of hand sanitiser, and a mask over my face – that contributed to the defamiliarisation of this otherwise routine experience. I also found myself lingering at each painting longer than usual, with a desire to reach out and touch the work; to trace the lingering gestures of someone else’s presence in the paint, during a time when physical contact was heavily restricted. I stood close up to these works, in an attempt to reconnect with the act of viewing art in the gallery context. Despite some sensations of familiarity, the experience is irrevocably different. 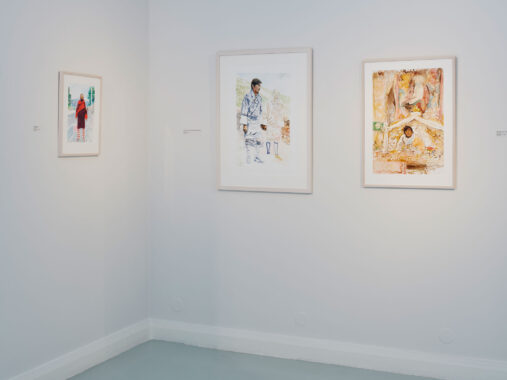 What is striking about the show is the amount of new works on display, with many completed since March 2020. The newer works are watercolours, mostly conveying scenes from Bhutan and Rwanda. The inclusion of these new paintings provides a glimpse into time spent in lockdown. Instead of painting scenes from her locality, Corcoran recreated images from foreign countries she has never visited. The Bhutan paintings were based on an issue of National Geographic from the 1970s, while those of  Rwanda were informed by a friend’s photographs. Corcoran’s distinctive painting technique draws attention to the material qualities of the medium; yet her compositions evoke the visual language of photography. Working with photographs as source material makes painting a process of translation, whereby certain qualities of the photographic image are transposed, creating a dialogue between the two forms of image production. Repetition of imagery is present in various paintings, suggestive of the photographic process. But unlike analogue and digital photography, with the capacity for reproducibility, Corcoran’s paintings behave as diffractions, with the similarity of images pointing to their inherent differences. For example, Rwandan Friends (2016) is a largescale, unframed oil painting, depicting two young men relaxing underneath a small grove of trees. The painting style sits between the gestural and representational, as recognisable figures are obscured with smudges and drips of paint. This scene is presented in two other works in the show, Isaac and the Farmer – Rwanda (2017) and Football Jersey – Rwanda II (May 2020). The former is produced with minimal lines, as marks are conservatively placed along the paper. The latter, created during COVID-19 lockdown, focuses on the figure of the man on the right, wearing a red football jersey. In contrast to the other versions, where emphasis is placed on the landscape, his body fills up most of the image frame – a striking distinction at a time when physical human contact has been limited.

The influence of photography can be also be detected through the composition of paintings, especially The Enquiry Series, where attention is placed on a teenage girl – Corcoran’s daughters – looking at artworks in the National Gallery of Ireland. These paintings are composed like snapshots, conveying the girl’s behaviours as she moves through the galleries. A Framed Viewing – The Earl as Subject – Observing Charles Coote by Joshua Reynolds (2019) presents Corcoran’s younger daughter looking up at Reynolds’s painting of the First Earl of Bellamont, next to an ornate mirror reflecting two figures. The scene evokes Las Meninas by Diego Velázquez, which has been the subject of art historical and philosophical analysis in the structuring of the gaze. However, unlike Veláquez’s work, where the unity of composition comes through the tracing of sight-lines, in Corcoran’s painting there is a disconnect between the gaze of Earl Coote, the gaze of the girl observing the painting, and those of the figures reflected in the mirror. The unifying gaze of A Framed Viewing is the maternal gaze of the artist. Thus, Corocoran’s series encompasses a multifaceted study of the gaze, involving subjects historically excluded from positions of authority in art and philosophy: the mother and her daughter. Corcoran’s gaze as a painter collapses with her maternal gaze through this series, as she presents the roles of mother and artist simultaneously as attuned creator.

EL Putnam is an artist-philosopher living in Westmeath. She lectures in Digital Media at National University of Ireland Galway.
elputnam.com