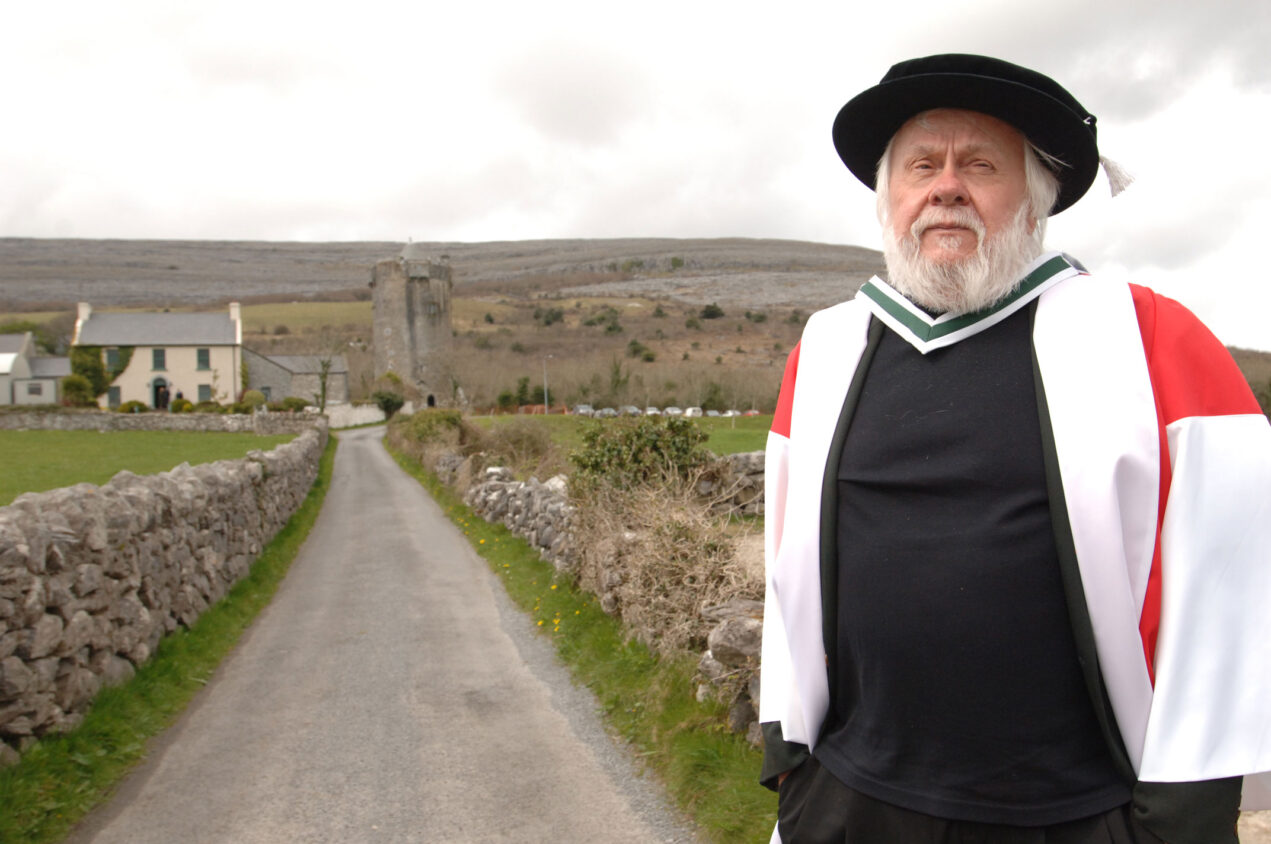 Following the passing of pioneering American conceptual artist, John Baldessari, last week, we are republishing an interview, originally commissioned by Jason Oakley for The Visual Artists’ News Sheet’s July/August 2006 issue, on the occasion of Baldessari’s Honorary Doctorate award by NUI Galway at Burren College of Art in 2006.

“Young artists are the future of art; you have to listen to their ideas; get into an interchange.  What I had to offer was advice on getting to where they wanted to be faster.  I found I cared.” – John Baldessari (1931–2020)

“In retrospect I can see some method in the resolution of an idea, but where the ideas come from is a mystery.  Ideas come from ideas.” – John Baldessari (1931–2020)

The making of art and the teaching of art do not always go together, even though for some they seem to be natural partners.  Just as some art teachers do not practice the art they teach, so some artists do not see a point in teaching. For some artists, however, the relationship of the two is important.

When John Baldessari came to the Burren College of Art in April 2006—to receive the honorary award of the Doctor of Fine Art of the National University of Ireland, he spoke as much about his teaching practice as his art practice and why it was important to him; and teasingly he hinted at connections between the two. As I am someone who is committed to the idea of art as a process of enquiry that leads to new knowledge, art and education are for me just two parts of the larger human endeavour. I was keen, therefore, to explore John Baldessari’s views on this subject. In an interview with him the day after the award ceremony I asked him what he found to be rewarding about art teaching.

He began by outlining how he had begun art teaching. “It wasn’t altruistic at first,” he told me. “I did it at my sister’s suggestion, to make money. I started at teaching in public schools and I found I liked it.” He had tried supporting himself by working as a technical illustrator, but found that unrewarding. “Teaching was much closer to my creative interests,” he said. Baldessari spoke about his motivation coming out of his early religious training and his sense of social conscience, “Art doesn’t help anyone, but I felt it could,” he said. Working with juvenile delinquents for a few months at a camp in the mountains with, “students whose attention span appeared to be about five minutes,” he discovered that, “here size mattered.” John Baldessari is 6ft 7ins tall, and whilst he impressed me with his mild and wryly humorous manner, I do not doubt his capacity to appear imposing should he wish to. Clearly he made an impact on those young offenders and he told me of one student who asked him to open the art room at night and with whom  he did a deal.  “It worked like a charm,” he said. “Some of the students seemed to like art even more than me!” His experience taught him of the good that art could do through its intrinsic value; “that it is worth doing for itself.”

He went on to teach at various levels including junior college and on a university extension course. This was at the time when his reputation as an artist was becoming established and soon he was offered a teaching position at the University of San Diego. When the Dean moved to Cal Arts (California Institute of the Arts) he invited John to go with him. As his reputation as an artist gained ground and he became financially independent he moved away from education, “But I found I missed teaching.”

So what was it about art education that had hooked him? “Young artists are the future of art, you have to listen to their ideas; get into an interchange. What I had to offer was advice on getting to where they wanted to be faster and I found that I cared.” His interest was no longer to do with money, but was to do with how artists understand and develop.

I asked him whether he had ever considered teaching to be an integrated aspect of his practice as had been the case for Joseph Beuys, whose Free International University had been one of his artefacts. “What was important was the importance of being a role model,” he said, “If  I can do it then you can too. There is nothing mysterious about it.”

At this point I asked him about his creative strategy as an art educationist. “Do I have a strategy?” he replied, “I wish I knew. When I thought I was being strategic I wasn’t, and when I thought I wasn’t I probably was.” “Students watch you, they look for what is significant and what is significant to me may not be to them and what they find significant…”  Mentorship, he went on to suggest might be a good way of seeing it, and he told me about the Rolex Protegé Programme whereby an established artist gives one on one support to an emerging artist. I asked him to enlarge on the role of the mentor. “It’s probably very pragmatic. Whatever works works, whether it’s instruction or sympathy – both work.”

Here I referred to the educational strategy of the relationship of intention, process and outcome, which is closely identified with art education in Europe, and I invited John to respond. “I want to see what they do and what they want, and then I want to see how what they do relates. Then I try to fine tune in my own mind what they are trying to do; is there any carry through and how can I help?” In focussing on the what? and why? of art practice John Baldessari seems almost European as distinct from the conventional American engagement with how?, and its focus on mediums and technique. “It’s pretty much like bringing up a teenager. When I was a teenager I drove my mum mad!”

I asked John to speak about the strategy and methods he used in his own work. “In retrospect I can see some method in the resolution of an idea, but where the ideas come from is a mystery. Ideas come from ideas.” He went on to discuss the idea of Darwinian evolution by citing a talk given by Julian Huxley in which he had heard the idea of the evolution of giant Galapagos tortoises discussed. “One tortoise comes out of another tortoise,” he said, “Ideas support each other. My next exhibition has come out of my five previous exhibitions. But now I’m exhausted, so what is the next step?”

Well, what is the next step? “I think it is an unconscious connection,” he suggested. “Everything comes out of what intrigues us. It is all connected; there is a thread through all of my work; the elimination of information and the maintenance of narrative. When you have one word, does the second word change that first word or lead to something new?”

He went on to talk of his interest in language and his belief that a word and an image are equal, “If a writer builds in words then I build in images,” he said. “Do you have a writing practice?” I asked. He shook his head not so much in negation as in perplexity. “Often I say I’m a frustrated writer.” “How do these creative strategies we’ve been talking about connect with your teaching?” “Well, I’m interested in clichéd information. I like breathing life into clichés, by which I mean dead language. It’s the same approach in teaching; seeing the clichés and revisiting the purpose of what’s being done, keeping it vital.

I went on to ask what contribution education might make to an artist’s success, thinking about the professional studies that have become part of most masters programmes.

“If you can think of anything else, do it,” he replied, Don’t do art for the money, for the market. My generation had no money. You had to have another job. And you can expect peer pressure to do different from what you do. Talent is cheap. Be crazy and be stubborn. Yes, and be passionate!”

This comment made me think of the means whereby emerging artists become established, so I asked about his views on contemporary art practice “Great art can appear any time, any place. You have to be open to being surprised. While you’re waiting at the garbage dump you have to look at a lot. Sometimes you see something and think, ‘I wish I had done that!’”

I asked him what he thought of the reworking of some of the art of the 1960s and 1970s without acknowledgement by artists much younger than yourself, sometimes appropriating your own work. He told me of an argument he had witnessed some years ago between Richard Long and Robert Smithson as to who owned the spiral, “In my view neither did, these things are ancient.” He also spoke of an artist who claimed that Richard Serra had stolen the title of a piece from him, Splash. “My answer to this man was, ‘So why don’t you claim the dictionary as yours, then you can claim that everyone has stolen from you.’ The fact is that art comes out of art, the same idea of evolution we were talking about just now. We build. No-one has ever been influenced by nothing at all. Education is a way of influencing too. It is the same process in art and in teaching. You have to look to the history of your own ideas and recognise what you are dealing with. Malevich reached a dead end with his white on white, but if you can push that forward then do it. But don’t fight blindly. Whatever works, works.”

“There is one thing that doesn’t work,” he added after a thoughtful pause, “didactic teaching. I reject that.” I asked him for good examples of teaching he had experienced. He laughed, “I received the worst teaching possible,” he said, “That was a big motivation.” “I think we’ve come full circle back to your own early experiences,” I said. “We have,” he replied, “Let’s join the others in the bar.”

To learn more about John Baldessari go to his website, www.baldessari.org

Timothy Emlyn Jones is an artist who has exhibited internationally and is represented in public collections in a number of countries.  His most recent exhibitions have been in Beijing, Galway, Sydney and Venice.  At the time of writing this article, he was the Dean of the Burren College of Art.