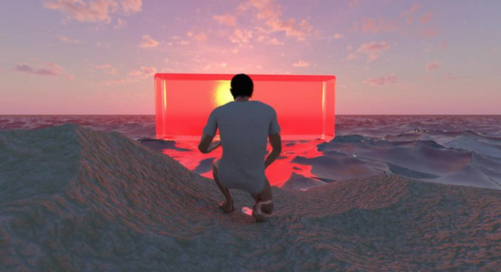 Sam Keogh will spend three months in residency at ISCP in Brooklyn, New York from April to June 2021. In recent bodies of work, Keogh has built intricate environments in which live performances unfold. Objects in these installations serve as props and mnemonic devices for the performance but are also in excess of these functions, spilling over with idiosyncratic detail and extraneous information. In this indeterminate space, materials, memories and affects begin to smudge into each other until a sticky cognitive map begins to emerge.

The ISCP Residency provides the awarded artist with a high-quality studio, living stipend, travel costs, studio visits, and off-site trips to museums, galleries and other cultural organisations. It supports the artist to build international networks, as well as contributing to the artistic community in a major city.

Inga Meldere will travel from Helsinki to spend two months in Dublin and work from a studio at Temple Bar Gallery + Studios in October and November 2020. Inga Meldere describes her works as being about art practices and painting methods. Her paintings, installations and prints are the result of detailed work with source material, weaving together personal and collective memories and experiences, art historical quotes and everyday imagery. Interested in what she calls “the mood of a painting”, Meldere narrates these fragments into her works with care and precision, following their lead until they reach a focus.

The TBG+S/HIAP International Residency Exchange also supports Irish artists and artists based in Ireland to spend three months in residency at HIAP – Helsinki International Artist Programme, in a live/work studio on the island of Suomenlinna in Helsinki. The Irish recipient in 2020 is Ruth E. Lyons. The TBG+S/HIAP International Residency Exchange is supported by the Finnish Institute in London. Ruth E. Lyons’ residency at HIAP is rescheduled in 2021. Lyons’ work is primarily in large-scale sculpture and the creation of public works that intervene in landscape.

Bassam Al-Sabah will spend three month at Cité Internationale des Arts Residency, Paris from October to December 2021. Bassam Al-Sabah’s work aims to convey visions of war, resistance and perseverance. He utilises a multi-media installation comprising video, painting, sculpture and printed matter. The work is concerned with how the past is continually revised to meet the present, when the juvenile fantasy breaks down into the reality of adulthood. Bassam Al-Sabah says “I’m excited to go to Paris and be on residency at Cité Internationale des Arts and carry out my research there. I will be developing a new CGI film and working on some new writing”.