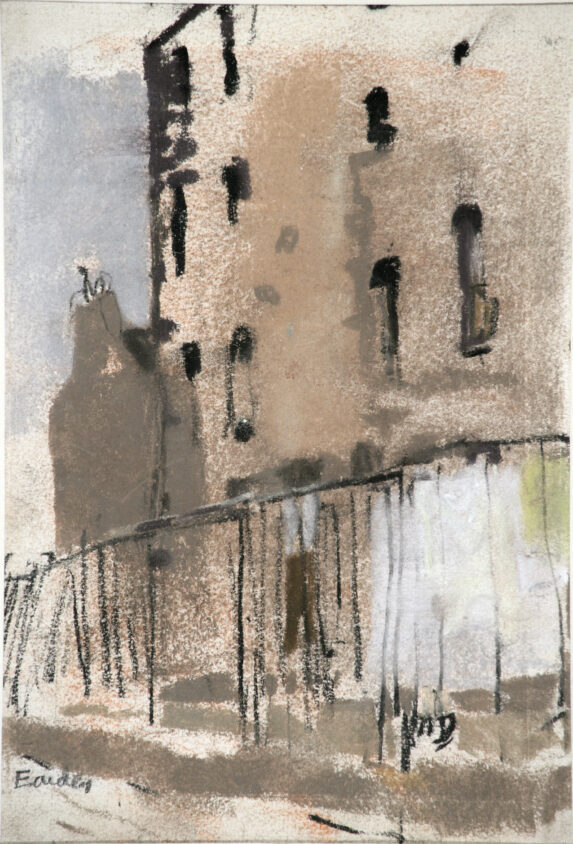 This summer marks the centenary of Joan Eardley’s birth. A summer thunderstorm in 1989 brought this painter into my life. Most days I was on the streets of Glasgow, entertaining passers-by with what is likely considered the lowliest form of outdoor art: scraping by as a pavement artist. Fleeing the downpour, coins jingling, I flung myself into a tiny gallery and found myself before a painting of Glasgow children, drawing with chalk on a pavement. The woman behind the desk was amused by the young man covered in colourful chalk dust so obviously captivated. She told me a little about Eardley, of whom I had never heard. The remainder of that summer, I scoured Glasgow and Edinburgh for more Eardleys. Ever since, she has travelled with me as a kind of patron saint of plein air.

Eardley is often portrayed as a two-sided artist: half-urban and half-rural. Urban Eardley’s studio lay at the heart of an overcrowded and unsanitary Glasgow slum. Through the back streets of Rottenrow, she pushed her easel in a pram, drawing and painting the tenements and the children who called them home. Rural Eardley was an all-weather outdoor painter in the remote fishing village of Catterline in Aberdeenshire. Her cottage had an earth floor, no electricity or running water, with forty abandoned canvasses nailed to the underside of its roof to help keep out the rain. Glorious rain poured into Eardley’s painting life, however, along with wind and snow and whatever else the North Sea flung towards her easel, held down frequently by ropes and anchor. Paint became weather and weather became paint. The two Eardleys, I feel, also bled into one another. Rottenrow and Catterline had much in common; both small, poor, close-knit communities, existing under extreme pressure.

Eardley’s letters from Catterline form a mosaic of her engagements with the elements: “In between blizzards it has been so much just what I wanted for my painting – that I stupidly imagined I could rush out and in with my canvas. You know what a job it was setting up that canvas at the back of the house. Well, I’ve had it 3 or 4 times to do and undo in the teeth of the gale.” Mostly these letters were to her dear friend, Audrey Walker, whose first-hand reminiscences of Eardley “painting outside in appalling weather” are supported by her photographic record of the painter shoulder-deep in summer fields or facing tempestuous winter seas. “Wrapped up in her world” was how Walker described the woman in her viewfinder, deftly conveying the fullness of Eardley’s immersion in all she painted.

I was born at Rottenrow hospital, five years after Eardley’s death, my parents having left Donegal in the 1950s. The Glasgow street over which the hospital loomed was one of Eardley’s favourite places to work, and from its windows she was a familiar sight. Eardley spent so much time standing on streets to draw that the constant and intense action of looking up at her subject and then down at the paper caused severe back problems, forcing her to wear a surgical collar. This vanished city, preserved by Eardley, greeted my unworldly parents as they arrived to join a Donegal community of migrant labourers, settled in the poorer tenement districts of Glasgow since the early twentieth century. Such bonds exist between the two places that as a child I thought the River Clyde flowed all the way from Glasgow to Donegal. Glasgow was permeated with a left-wing aesthetic, promoted by refugee Polish artist Josef Herman, in whose studio Eardley found inspiration and friendship. I myself was a socialist before I could tie my own shoelaces.

In Donegal, we are fortunate to have two Eardleys on public display. Both are part of the Derek Hill Collection at the Glebe House and Gallery. Hill was an early admirer, making significant purchases and writing a tribute to Eardley for Apollo magazine in 1964. For several summers, the Glebe have invited me to tutor plein air workshops in their magnificent gardens. As I encourage painters to immerse themselves deeper in the experience of being alive at this moment in this place, I’m often aware of the presence of Eardley. She is nearby.

According to Virginia Woolf, “great poets do not die; they are continuing presences; they need only the opportunity to walk among us in the flesh.” In this spirit, I overlook the fact that Joan Eardley died at the young age of 42, her ashes scattered on the shore at Catterline. She has now been alive for one hundred summers. And I have little difficulty imagining a wayfarer ducking indoors from a shower, one hundred summers from today. She will find herself before a wild Eardley seascape, astonished that this long-dead artist is so bracingly alive.

Cornelius Browne is a Donegal-based artist.