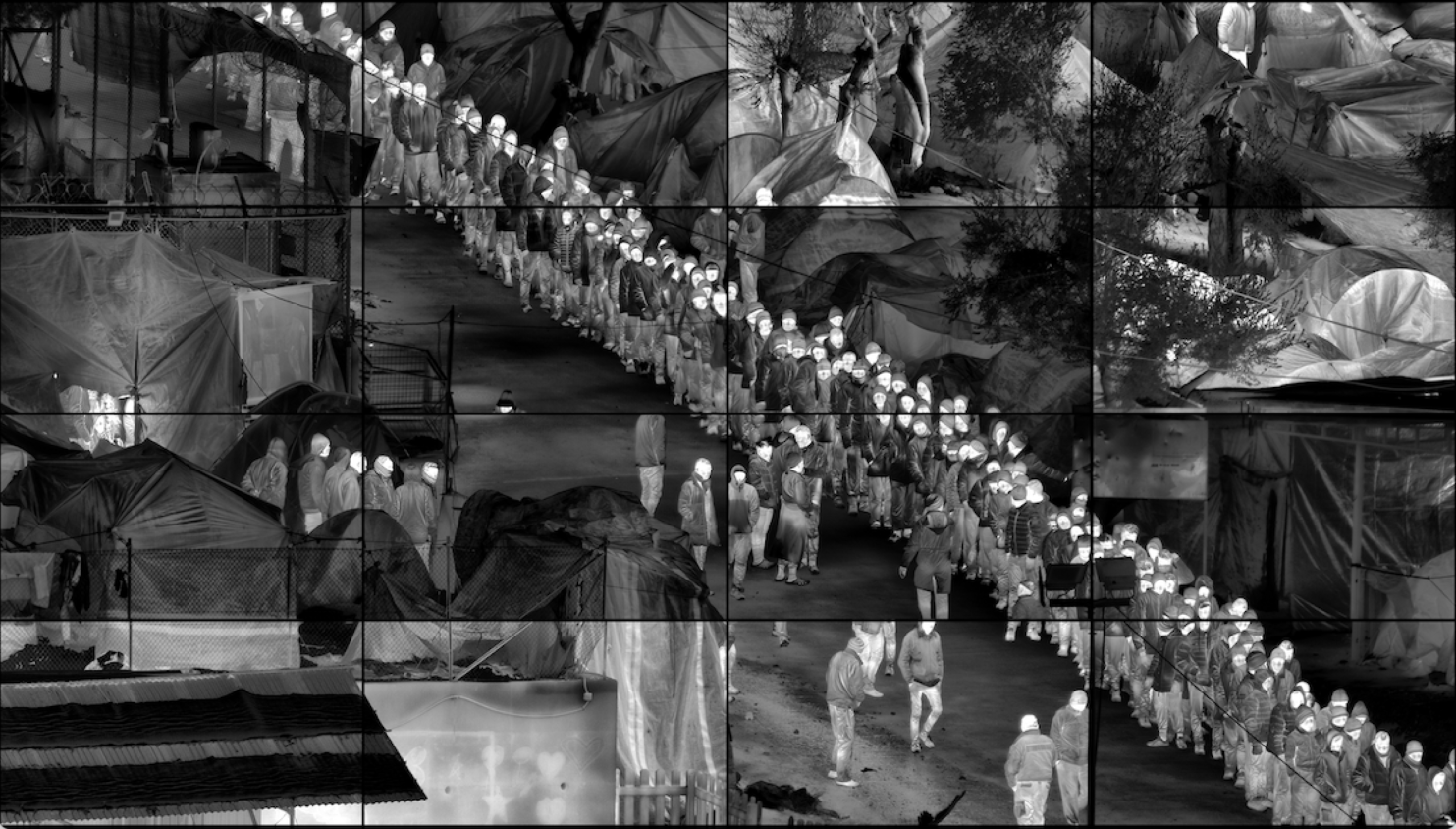 The Butler Gallery welcomes visitors to the Irish premiere of two highly acclaimed screen-based works by Kilkenny-born artist, Richard Mosse. This is one of the first main exhibitions since the gallery relocated from Butler Castle to its newly renovated site by the river. Both works detail the often-fatal journey of refugees and migrants into the European Union and the infrastructure that’s employed along its Mediterranean borders. Grid (Moria) (2017) focuses on one particular camp on the Greek island of Lesbos. A fire in 2020 has since destroyed the camp but four years ago, Mosse undertook to document the facility and its inhabitants, producing a six-minute, 16-channel video work, whose scanning motion provides a brief survey of this open-air site and its surrounding area. Presented as part of the Arts Council’s ‘Brightening Air/Coiscéim Coiligh’ – a ten-day season of arts experiences in outdoor places – the work was displayed on one large screen, erected outside of the gallery building. The mechanical operations of each divided section work in tandem to illustrate a picture of captives awaiting their release.

Incoming (2014-17), which has a running time of 52 minutes, is presented indoors as a large three-channel projection. The video starts with one central screen of the triptych active, and two black screens on either side. In a darkened room, the sound and controlled climate makes for a hospitable but nervy environment. There is just one long bench from which to observe this work but seeing is simply the act of confirming and allowing to register what you have heard. The tearing open of fabric. Cutting. Breathing. The left screen comes on as the full extent of the visual continues to be drawn with sounds. Skeletal remains are revealed before the screen goes black and our attention is placed again on the central screen. A bone is sliced through with an electrical saw until there is an unmistakably real spray of black fluid shorn from the marrow of the deceased. It is fair to say that the only way one might stomach this sort of visual content is through the almost metaphoric quality of the technical equipment, used here by Mosse to convey what is sadly a routine occurrence that we are both aware of and blind to.

In an earlier project set in Africa’s Congo Basin, the artist used saturated reds, pinks and purples to bring warring militia and the lands over which they fight into to a sort of hyper life. Where the locations and people of The Enclave (2013) acquired the characteristics of a colourful if troubled community, Incoming offers a haunting black and white portrait, again using military-grade camera and lens technology to show us what we cannot ordinarily see. If the armed Congolese tribes of that widely successful series appeared far from everyday life here in Europe, Incoming is about bringing the story nearer by showing us how close to it we really are. In that sense, it follows a simple narrative structure, but that depends on how much of the film you watch. From the autopsy we move into the open air of holding facilities, where children and adults are observed day and night as they make the best of the conditions and what few freedoms they offer.

The camera used to deliver these black and white images illustrates not light but heat and at times we are watching all three screens, something that isn’t really possible given their size and proximity. At other stages, just one screen focuses our attention, and this too is not always easy, as night-time sea rescue is followed by loss of life and the harshness of survival that predominates any aesthetic or moral consideration. Dappled light warms whatever it touches, and the moments of magical transcendence appear at times to shimmer as light and heat fuse, bringing into focus the nature and culture of human existence. As a viewer, what lifts you also keeps you seated; but as the film’s composer Ben Frost has said elsewhere of his often tensely sonic output, you will be waiting a long time for the base to drop. In that sense and others, this work’s sympathies provide the basis for an excoriation of the leading causes of mass migration and the containment of people, outlining simply another accepted feature of the military-industrial complex, from which we all await release.

Darren Caffrey is an artist and art writer currently based in the Southeast.