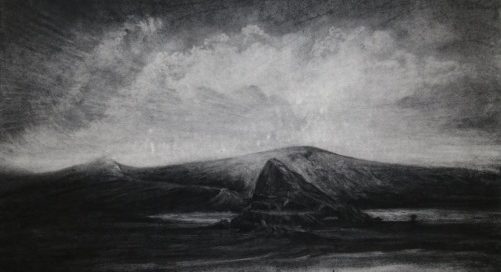 Wexford County Council and Pembrokeshire County Council, Wales, are delighted to announce David Begley (Wexford) and Fern Thomas (Wales) as the recipients of two new artist in residence programmes for Wexford and Wales. Starting in August 2020 and running over two years, both of these artists’ residencies are part of Ancient Connections – an exciting three-year arts, heritage and tourism project linking North Pembrokeshire and North Wexford. Ancient Connections is funded by the European Regional Development Fund with partners Wexford County Council and the Per Cent for Art Scheme. Both artists were selected as part of an Open Call Two Stage selections process which was managed by Wexford Arts Office in partnership and Ancient Connections & Pembrokshire County Council.

As part of this residency, both artists will engage with communities of place and interest over the coming years in Ferns Wexford and St David’s in Pembrokshire, and develop a new body of art work which explores the theme of ‘Exploring a Shared Past’ as part of the ‘Ancient Connections’ .Each artist residency is valued at €20,000 and will culminate in a series of public art outcomes to be presented in both Wexford and Wales in 2021-22.

Ancient Connections aim is to motivate the communities of North Pembrokeshire and North Wexford to rediscover their shared heritage through research, archaeological activity, creative arts, and storytelling, sharing knowledge, experience and skills to create a stronger sense of identity and place that will continue to flourish in years to come. Likewise both artists will link across Wexford and Wales throughout these residencies, entering into dialogue with one another and exploring shared histories.

During his residency Wexford based artist David Begley will make a film on the history of farming in Ferns and to facilitate a visual arts, storytelling and gardening project with St Edan’s National School in Ferns. In addition he will engage with the Ancient Connections archaeological digs planned in Wexford and Wales, and produce a new body of work in drawing, print, painting, ceramic and writing. During her residency, Welsh artists Fern Thomas will create a radio station that ‘transmits’ from a fictional island where there will be a series of 16 broadcasts during the lifespan of the residency. She will work with historians, archivists, musicians, writers, poets, archaeologists and storytellers in a series of conversations from the ‘island’ which will be broadcast.

David Begley is an artist and writer who currently lives and works in County Wexford. David loves to work with children, through humour, art, sound and story. He has a multidisciplinary practice involving animation, documentary, drawing, filmmaking, painting, printmaking, music, sound, writing and arts education. He loves story and language and he is fascinated by mythology and folklore. He is an avid organic gardener, reader, and musician.

David has exhibited his animations, drawings, paintings and prints at galleries and festivals nationally and in Australia, China, Europe, USA and The UK, and has facilitated arts and music projects for all ages for over 20 years. He is a qualified graphic designer, with BDes from NCAD and has spent years designing and illustrating in print and web media for record companies, magazines, clubs, galleries, and small businesses. He has exhibited extensively locally, nationally and internationally.

Fern Thomas is a Welsh artist and her practice plays with mythmaking, folk magic and folk healing, and the need for new rituals. Her work explores archetypal images, pedagogical spaces, and inner landscapes, creating works rooted in a connection to nature, its rhythms and place.

Fern graduated from the MA in Social Sculpture, a course rooted in ecological citizenship, at Oxford Brookes University in 2012 where she was awarded the Interdisciplinary Arts Prize in Social Sculpture and was supported by an AHRC Award. In 2013 she was a recipient of a Creative Wales Award from Arts Council Wales and in 2011 was winner of Mostyn Open selected by Richard Wentworth and Karen MacKinnon. She has exhibited in Norway, Mexico, New Zealand, Germany, and USA and in venues across the UK including Anthony Reynolds Gallery in London. She currently has a Fellowship with g39 gallery, Cardiff as part of the Freeland’s Foundation Arts Programme.