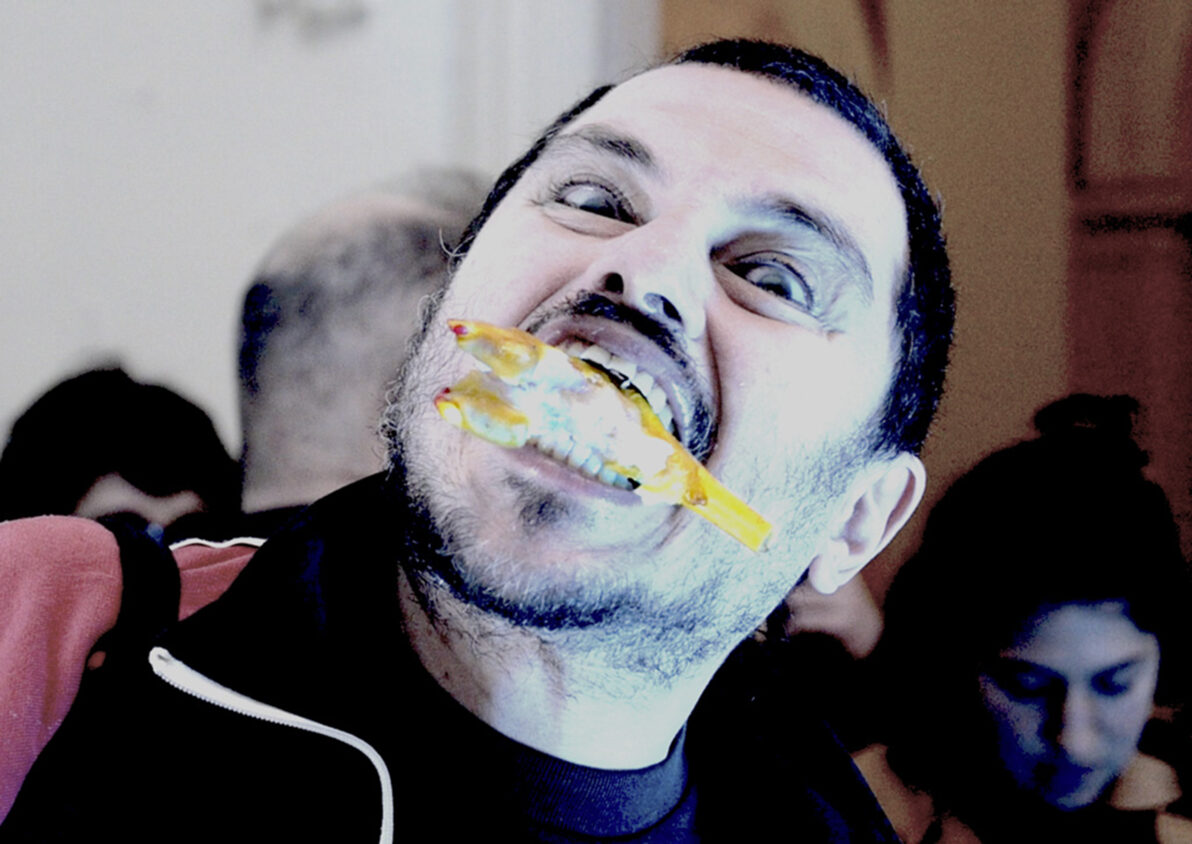 STEPHEN BRANDES DISCUSSES THE FOOD, THE BAD AND THE UGLY – A NEW PUBLICATION BY THE DOMESTIC GODLESS.

This year, the gastronomic art collective the Domestic Godless celebrate 15 years of working together and exploring food – its taste, its appearance, its history and cultural values – as material for subversive experimentation. The occasion will be marked with a three-week-long residency at Crawford Art Gallery in Cork in November, and will be followed next year with a national tour to several arts centres around the country. Over those 15 years, we have repeatedly been asked questions relating to our research interests and practice, such as: “What exactly do you do?” (by those who don’t know what we do), “Are you the guys who do roadkill?” (from people who think we do roadkill, but are wrong) and “Would you ever think about making a book?” (from those who do know what we do and, thankfully, find it amusing). So, this year seemed an opportune time to finally make that book and to lay those questions to rest (while possibly igniting many more).

As artists, it was inevitable that we would approach this project as an artwork, in that we would shape the material at our disposal into something that willfully avoided easy categorisation. The food, the bad & the ugly is not a history, a biography, a work of fiction or a recipe book, yet it contains all of these elements. It is also conventionally a book, though its content is far from conventional. Aside from our own archival documentation, we have been lucky to include contributions from a food critic (writing under a pseudonym, for the sake of protecting their professional reputation), a prominent writer on art who has considerable knowledge of cheese and a TV chef who has been dead for 20 years and whose additions to the book have been transcribed by séance.

Crucially, the book is self-designed and self-published. Work began in early 2017, as we accumulated the material, texts, recipes and images and learned InDesign from scratch. We were lucky to receive funding from Crawford Art Gallery and Cork City Council, which gave us the time to consolidate this material, to research fresh content and to design the book. Early on in the process, we needed to make practical decisions regarding the size and look of the publication and this was partly achieved by looking at examples of other books that we thought might work. We also had to consider working to a tight budget, which had not yet been raised.

Pricing the book became a balancing act. We decided on a figure for the number of pages we thought we would fill, the type of paper we wanted to use and the rough size – something that would comfortably fit in an envelope. We considered what might be a reasonable selling price and a sensible production run. We finally needed to consider the feasibility of the project, but optimistically assumed that if one third of the people who had befriended us on our Facebook page bought a book in advance, then we would achieve our target.

We then did a lot of research regarding printers to get several quotes. We were aware of many printers whose reputation for value and professionalism are assured, but for us as novices it was essential that we found a printer that had the patience to deal with our lack of experience without becoming exasperated. From past experience, the English language – no matter how well it is deployed – has the potential to be misinterpreted, so we were very happy to find a local printer that we could talk to face-to-face. If any problems transpired, discussions and solutions could be arrived at after a short drive, as opposed to numerous emails or telephone calls. Eventually, I went to visit Watermans on Little Island in Cork, with a tasty Polish publication my colleagues had picked up in Gdansk as a reference. My confidence in the printer was significantly enhanced by him knowing exactly what type of paper had been used just by looking at it. He was able to advise on sensible solutions to adjust the size and format to fit our budget. With the composure and humility of a very good primary school teacher, he settled my mind-numbing anxieties.

The next stage was to raise the money. Crowdfunding seemed the obvious choice. We used Fundit, an Ireland-based crowdfunding platform run by Business to Arts, who offer meticulous planning advice for preparing a project and a step-by-step guide to creating a successful campaign. We set ourselves a time limit of 40 days to achieve our goal. Fundit works by offering rewards in return for financial support. In our case, we were offering advance sales of the book, with an invitation to the launch or free postage within the island of Ireland to those who couldn’t attend or collect the books themselves.

Most projects seeking funding offer several reward options in increasing increments. We decided to keep ours as simple as possible, not forgetting that the resources for delivering these rewards would need to be factored in  to the overall target. The rewards consisted of one signed book for €25, two signed books for €50, two books with the funder’s name printed inside for €100. Our top reward to funders willing to pay above and beyond the price of the book was to offer an additional exclusive evening of tastings, a take-home goody bag and a specially procured bottle of sea-lettuce vodka. The eventual target not only included the printing costs, but also an educated estimate for postage and packing and funds to deliver our top reward (having set an available limit of twelve).

What followed was a crash-course in marketing. We built a short animated introductory video and embarked on a carpet-bombing campaign of social media with news and images from a project commissioned by the Athens Biennale team, to coincide with the arrival of Documenta in Greece. The Fundit campaign was subsequently launched immediately on our return.

As Fundit accurately predicted, the public response over the first two weeks was healthy – and then it tailed off worryingly. We were conscious that, if we failed to reach our target, it would mean the death of the project and any funders would have their lodgments returned. So, with two weeks before our deadline, we embarked on a daily social media campaign. Being painfully aware of the desensitisation that repeated advertising can induce, we designed a completely new reminder every day, each one infused with humorous, but acutely visible, signs of panic and distress. And it worked. The book has since gone to press and will be launched at the Crawford Gallery on 4 November.

While the Domestic Godless pride ourselves on a measured but irreverent disregard for professionalism when it comes to our presentations with food, we played it fairly safe with the presentation of this book. In this instance, it seemed a step too far to either furnish it with an anarchic mélange of styles or over-design it with cleverness, when the content within already displays enough disregard for convention. We had considered using different papers – including edible rice starch or elements that could be scratched and sniffed – but in the end, we opted to publish something both accessible and feasible. At the time of writing, The food, the bad & the ugly has not yet entered the public realm, so there may be some surprises yet to be found amongst the pages. Moreover, this book may not be our last…

The Domestic Godless was originally founded in 2003 by artists Stephen Brandes, Irene Murphy and Mick O’Shea under the Cork Artist’s Collective banner at the exhibition ‘Artists/Groups’ at Project Arts Centre, Dublin.