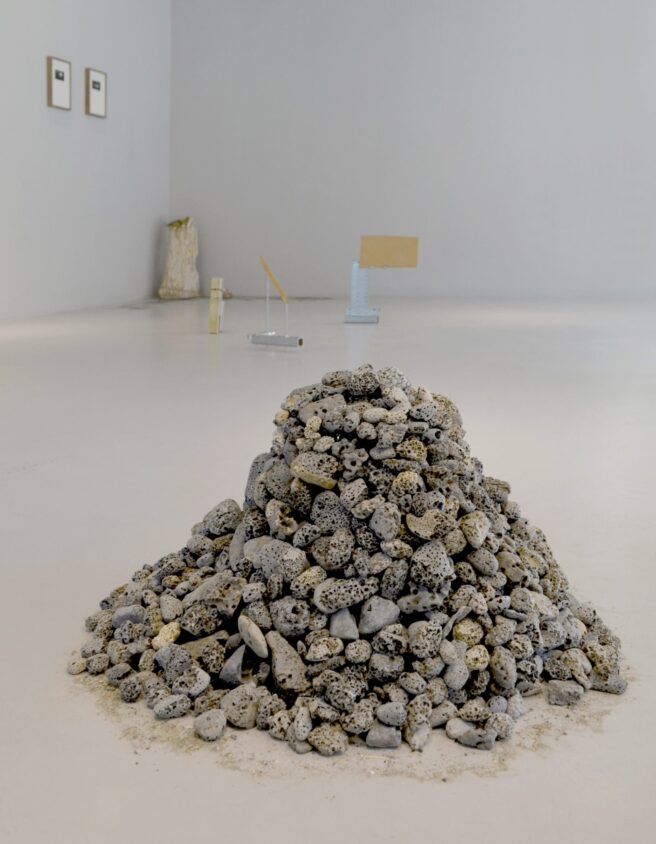 The glass modernist façade of the NCAD Gallery may be considered a portal into the machine itself. To function, this machine depends on an engaged, creative, intellectual exchange between students, researchers, lecturers and artists, who are in turn inherently dependent on the infrastructures and resources the machine affords them. ‘Infrastructures of Now’, curated by Anne Kelly, interrogates this interdependency, critically addressing questions of autonomy, institutional expectations and the technical methodologies and languages engaged by the contemporary practitioners it frames. The works featured in this exhibition have at some point – either notionally or physically – passed through the engine rooms of this machine: the campus libraries.

Unearthed from the collection at the National Irish Visual Arts Library (NIVAL), is documentation chronicling the processes of textile designer Leslie Eastwood. Presented in a vitrine are intricate frame point designs, burnt orange upholstery swatches (destined for DART and Dublin Bus seating in the early eighties) and designs for musician Paul McCartney’s office. Among the documentation are black and white photographs of Jacquard looms and of Eastwood himself, who passed away in 1999. This is Kelly’s instigative threshold, where we witness the symbiosis of two distinct languages: that of the artist’s hand and analogue technology, a mutualism that ultimately translates idea into form.

Andrew Folan’s sculptural work further manifests this symbiosis of language. A floor-based glass box displays white laser-sintered polyamide flowers, which are 3D derivatives of his digital animation The Prometheus (2010). This series is otherworldly, stark and unnaturally flawless. In contrarious proximity, Shane Keeling’s punky ceramic slip vases – punctured with screws and the smirking statement “flowers are gay” – scoff at the utilitarian notions traditionally associated with his medium.

Alan Butler and Elaine Hoey’s video work, Prospero AI, imagines a futuristic artist residency programme, where participants can work under the tutelage of a super artificial intelligence system. The work brims with the utopian promise of a Facebook recruitment commercial. It cringes with aspirational notions of how our surplus time should be spent, playing on our technological dependency and innate need to belong to something bigger than us – even if that is, in this case, a dystopian institution that determines our thinking and ensures our compliance.

Channelling a similar dependency, Jessica Foley’s audio sculpture, Holes (2018), consists of a mound of porous stones, eroded by the coastal environment they’ve been extracted from. The stones are piled around a computer-generated voiceover (reciting poetry relating to the topography and geology of Portrane, County Dublin) like a group of devotees assembling around a magnetic prophet they have inadvertently created. Mark O’Kelly’s painting, Leaders and Followers (2010), depicts an ominous cinematic woodland scene, with the central protagonist surrounded by onlookers and adorned with flowers. At first glance, this scene could be mistaken for an art college party, but O’Kelly’s composition pertains to sinister hierarchical systems and our blind collective propensity toward docility.

Tom O’Dea’s A Séance for Pierre Méchain (2018) is a transparent technical cornucopia of hardware and software, sculpturally amplifying its energy source with exposed wires, antithetical to the efforts of the French mathematician and astronomer to conceal his miscalculations. Circuit boards contain text referring to the revision of International System of Units in 2019, conveying humorous scepticism towards universally accepted knowledge bases and their malleability. In Adrian Duncan’s mixed-media sculptures, Love Notes From a German Building Site (2018), three small-scale figurative works whisper in sharp satisfying angles on the floor, appearing to comment on his larger suspended geometric work that engages with the architecture of the institution that supports it.

Articulating a multifarious vocabulary, all of these works lilt with institutional accents. If the NCAD Gallery is a portal into the machine itself, ‘Infrastructures of Now’ succeeds in illuminating the languages that fuel it. Kelly’s bilingual curatorial approach pitches immanent concerns (regarding institutional and hierarchical adherence) against the evolution of technical languages engaged with by contemporary practitioners. However, perhaps the true threat to creative autonomy is the movement toward a symbiosis of these technological and institutional avatars, supported by the self-referential ideologies of the machine itself.

Brendan Fox is a writer, curator and visual artist based in Dublin and Rome.