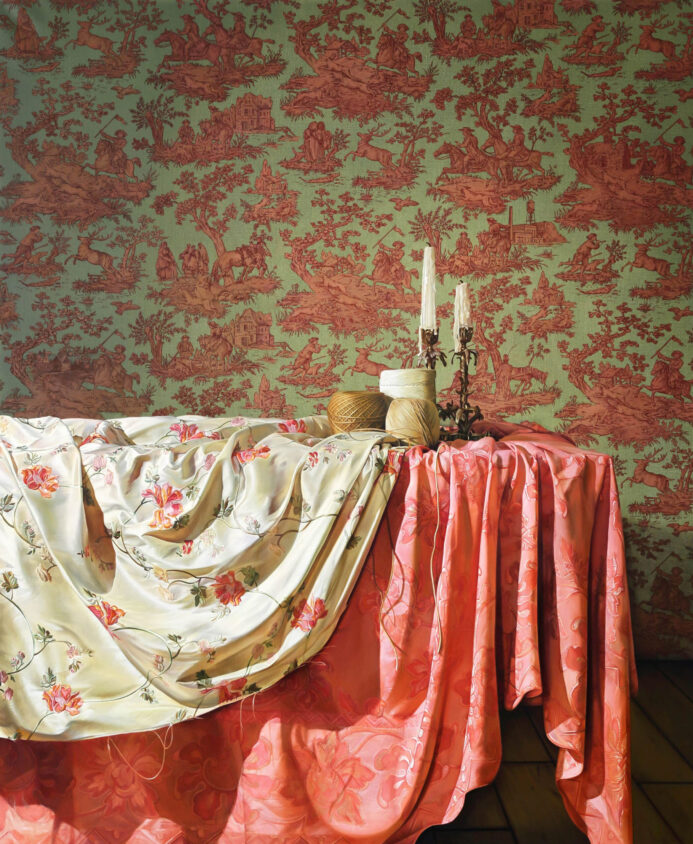 The annual Golden Fleece Award is a prestigious independent prize operating since 2002 through a charitable bequest left by weaver, painter, sculptor and teacher, Helen Lillias Mitchell (1915-2000). The award resources visual artists, designers and makers, from or resident on the island of Ireland, to innovate and develop their work at a critical point in their career.

Initially geared towards craftspeople and those who work figuratively in the visual arts, the criteria were expanded beyond these limits in 2018. The competition is now open to artists working across all forms of the visual and applied arts and crafts, culminating in one or more major awards and, where deemed appropriate, additional prizes. While the size of the fund varies from year to year, it generally totals around €20,000, distributed by its board of trustees on the basis of input by an advisory panel.

To mark the award’s twentieth year – and to acknowledge the challenging backdrop arising from the global pandemic – the decision was taken to increase the 2021 prize fund to €50,000, comprising five awards of €10,000. Thanks to a recent additional bequest by the estate of engineer and artist, Seán Mulcahy, a further award of €10,000 has since been added, resulting in six prizes and a total fund of €60,000. This amplifies the trustees’ fulfilment of Lillias Mitchell’s wish “to give artists a ‘boost’ in times of particular need”.

The winners will be drawn from a recently announced shortlist that, once again, represents practitioners from a range of disciplines. These are Aideen Barry, Bassam Al-Sabah, Fiona Byrne, Izzy O’Reilly, Jennifer Hickey, Laura Fitzgerald, Lorna Donlon, Maria McKinney, Sinead O’Dwyer and Tamsin Snow. Online alternatives to the usual in-person award ceremony, held in late March, are under review, and will be announced on the website (goldenfleeceaward.com).

The legacy enshrined in the Lillias Mitchell trust fund reflects a life spent highly engaged in the fields of art and craft, as well as a comment made by a friend of hers that “everything she did was of lasting value”1. Born in Dublin and displaying early artistic talent, Mitchell was instructed in painting by Elizabeth Corbet Yeats2. From age eleven she was taught by Lilian Davidson, and then by Dermod O’Brien at the RHA school. She took sculpture courses at the National College of Art and, from 1937, spent a year in Switzerland studying sculpture and modelling in clay. In 1940, she won second place in the RDS Taylor Art Award for a piece entitled St. Patrick Struggling in his Soul for Peace.

From that year, and throughout her life, Mitchell was an exhibiting member of the Watercolour Society. In a fortuitous twist, having moved to North Wales in 1943 to give instruction in clay modelling, she found herself teaching weaving under the direction of Ella McLeod, a renowned figure in the field. Upon returning to Dublin in 1946, she and her friend, Morfudd Roberts, established a weaving workshop in Lower Mount Street, which they called the Golden Fleece. Hand-lettered text from an emblem Mitchell developed for the initiative has been incorporated into the recently redesigned Golden Fleece Award logo.

In 1951, Lillias Mitchell was supported by the Minister for Education, Richard Mulcahy (father of recent award benefactor, Seán Mulcahy) to open a weaving department at the National College of Art, where she taught until her retirement. She attended a summer craft school in Sweden to purchase looms and study spinning and weaving techniques, travelling also throughout Donegal, Connemara and Kerry to research the methods of traditional spinners, dyers and weavers. Favouring natural fibres and dyes, Mitchell disseminated her accumulated knowledge through a number of published books. In 1975, she founded the Irish Guild of Weavers, Spinners and Dyers, which continues to promote these crafts through regular workshops and demonstrations.

Maintaining a lifelong involvement with the Royal Dublin Society, especially its arts and crafts programmes, Mitchell founded an eponymous award in 1987, which for many years formed part of the textiles category of its National Crafts Competition (now the RDS Craft Awards). In recognition of her wide-ranging contributions to the arts, she was made an Honorary Life Member of the Society in 1993 and an Honorary Member of the RHA in 1995.

Amassing a rollcall of over one hundred shortlisted applicants and winners over its first twenty years, the Golden Fleece Award has provided many timely supports to creative practices. In the spirit of Lillias Mitchell’s legacy, they form a diverse group that includes visual artists, weavers, jewellers, ceramicists and woodworkers, all of whom continue to be promoted across its platforms.

The most recent Special Award winner, Kathy Tynan, was also shortlisted for the Zurich Portrait Prize, while Ailbhe Ní Bhriain, the 2020 Main Award winner, was a runner-up to represent Ireland at the 2022 Venice Biennale. Other past recipients include the inaugural awardee, textile artist Helen McAllister (2002), known for her intricately embroidered shoe forms, mixed-media artist Suzannah Vaughan (2004), painter Clive Bright (2005), and furniture designer and maker Stevan Hartung (2009).

After the first decade of its operation, during which a single prize was awarded each year, the categories of Commendation, Merit and Special Award were introduced. Among the first to receive a Merit were visual artist Sean Lynch (2012) and jewellery designer Eily O’Connell (2013), while early Commendations went to sculptor Rachel Joynt and visual artist Bridget O’Gorman (both 2015). The inaugural Special Award winner was multidisciplinary artist Fiona Mulholland (2017).

Applications are accepted online from August to November each year and assessed by a panel of experts drawn from relevant fields, each serving for three years. The 2021 panel comprised: Angela O’Kelly, chair, jeweller and Head of Design for Body and Environment at NCAD; Declan Long, art critic and co-director of MA Art in the Contemporary World at NCAD; Catherine Marshall, art historian, curator and editor; Ann Mulrooney, a creative industries leader; and Audrey Whitty, Head of Collections and Learning at the National Museum of Ireland.

Susan Campbell is an independent visual arts writer and researcher.

²Elizabeth Corbet Yeats (1868-1940), also known as Lolly, was co-founder of the Dun Emer Industries arts and crafts co-operative for women (est.1902). She was sister to Susan (Lily) Yeats, William and Jack Butler Yeats.