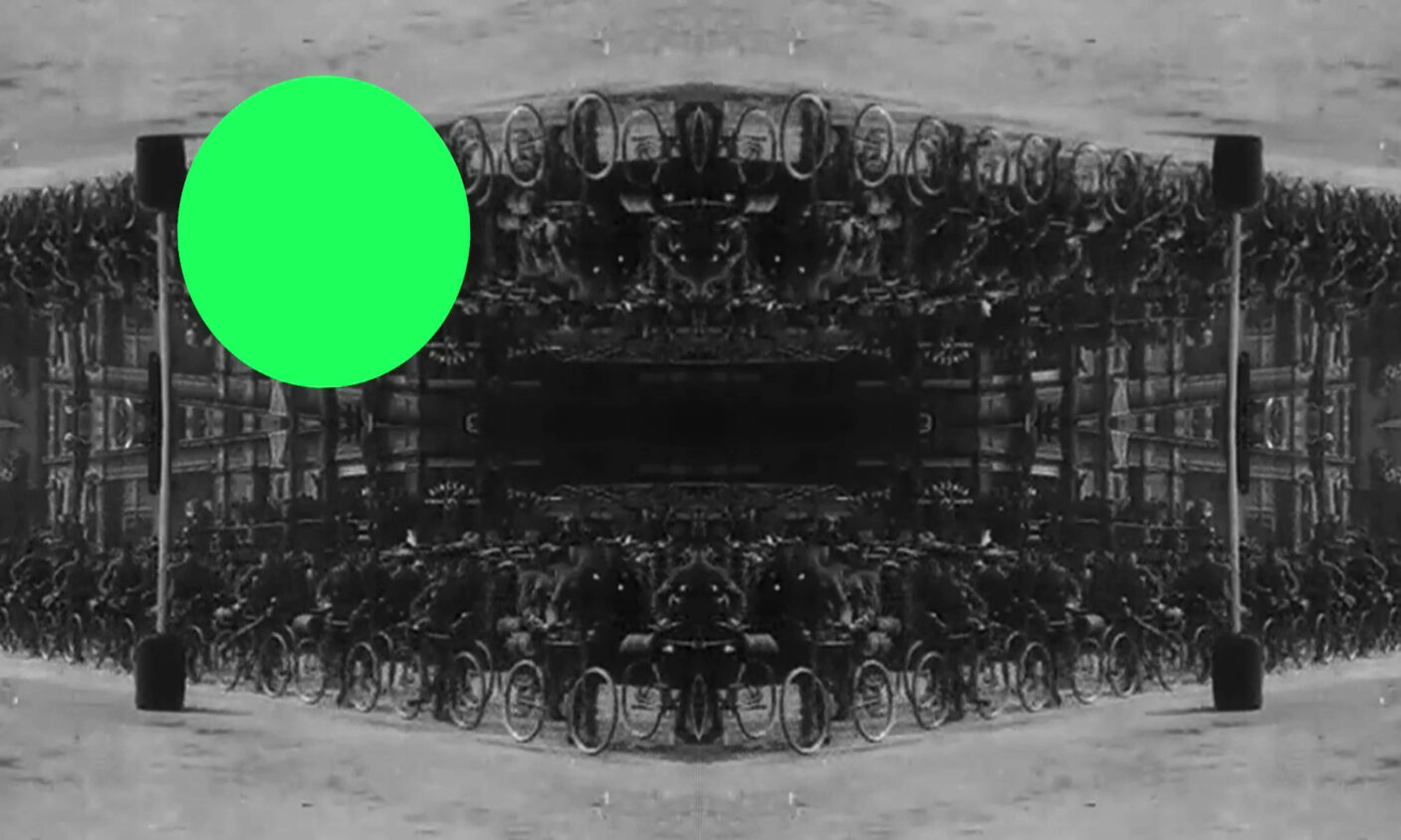 It’s about four in the afternoon: I’ve just bothered someone in an office to buzz me up to the first floor; I ascend a grand Georgian staircase, lined with Rothko posters; I wait while they switch everything on; and now I’m watching a stage eat itself. There are four metal scaffolds with stage lighting, mirrored in quadrants, cyclically contracting then expanding, like industrial foliate. Out of the corner of my eye, I notice that a progress bar has appeared at the top of the screen, with a timer counting 3, 4, 5 – then it’s gone.

I’m at the Fashion & Textile Design Centre, one of four eponymous ‘new spaces’ in Derry, where sixteen projects have been situated from July to December, in four instalments of four projects each. New Spaces is a joint venture between Visual Artists Ireland and Derry City and Strabane District Council, supported by the Arts Council of Northern Ireland Challenge Fund that, as decreed in an early press release: “Allows people to experience exciting and challenging contemporary art in new ways”. Certainly, off-site art projects can offer experiences distinct from those in the more utopian setting of an art gallery, with characteristics often borne out of the frictions inherent to such projects. Indeed, part of New Spaces’s remit is to encourage emerging curators to engage with – and learn from – the challenges that can result from curating art projects in unconventional settings. The exhibitions for each instalment were curated by Rebecca Strain, Edy Fung, Alice Butler and Mirjami Schuppert, who were selected during an open-call in early 2018, based on the strength of their site-responsive proposals. The fourth and final round of exhibitions ran from 17 November – 15 December 2018.

In Ebrington Square on Saturday 1 December, Shipsides & Beggs Projects – an artistic collaboration between Dan Shipsides and Neal Beggs – presented ‘Zombie Line, Wheel and Wire’, a film screening and accompanying artists’ talk, curated by Alice Butler. Shipsides and Beggs reflect on the post-war geographies and defunct military infrastructures of the Dolomites in Northern Italy, focusing on the iron cables originally used as messaging and scouting routes for Italian soldiers during the First World War. The film leans on the disoriented visual logic of psychedelia to figuratively spin these cables into bicycle wheels, enacting a visual genealogy of the bicycle – from darling of the Italian Futurists and a favoured political symbol of Mussolini, to military vehicle (including – incredibly – the ‘UVF Bicycle Corp’), and hyper-masculine symbol, resplendent in immodest Lycra. Imagery recurs cyclically throughout, joyously asserting the possibilities of film as a nonlinear medium, where duration does not necessarily prescribe that narrative should run in parallel.

Yarli Allison’s ‘[Backspace]’ is a four-part series of installations reflecting on growth, degrowth and evolution, filtered through biographical episodes. Part four, Infant, was due to take place at Gwyn’s Café & Pavillion in Derry’s Brooke Park, concluding the series with gestures of rebirth. But it was cancelled. From what I gathered while waiting for my coffee, the work was intended to involve an object suspended from the ceiling, which set off a dispute over whether it would “fit”. The artist opted to deliver a performance piece in the park grounds on the opening night instead. Evidently, artistic interests clashed with the spatial logistics of a working café, laying clear some of the practical limitations of off-site art projects: these aren’t utopian spaces where we are encouraged to loiter and just think for a little while; they are often functional spaces with their own set of demands. I would probably have ordered that coffee anyway – Gwyn’s is a beautiful café in an idyllic setting – but as I did so, I was aware of an implicit exchange: “I can’t just ask to see the art, and then walk out!”

At the Sion Stables heritage centre in Sion Mills is a more harmonious relationship between project and location. Presented within a large glass case, Hiroko Matshushita’s Dualism of Storytelling is a delicate cut-paper installation, resembling a frieze, embossed on both sides of an unfurled, folded scroll. It is a take on Snow White, told between two narrative threads on either side of the paper, one in English and the other Japanese. The story is illustrated with silhouette portraiture, reminiscent of traditional Regency imagery, where one might see scenes of fox-hunting, or courtship in elegant hats. In an adjacent space stands Emma Hirsk’s sculpture, The Womanly Art of Welding, two elongated metal frames standing upright with a protuberant abstract form emerging from their centres. Both projects were curated by Rebecca Strain and installed among a permanent collection of artifacts from Sion Mills’ history as the company town for the Herdman Flax-Mill, established in 1835. Among the collection is a photograph of men at work in the mill, shovelling through an indoor desert of flax seed: the posture of the figures resonates with Matshushita’s illustrations, which in this context evoke an idealised remembrance of uneven relations between lords and tenants, employers and workers. As a model mill town, Sion Mills itself can be seen as symbolic of the duality pertinent to Matshushita’s work. Proud as the town is of the Herdman family legacy, Matshushita cautions against mistaking noblesse oblige for equity. Hirsk’s sculpture likewise speaks to its stablemates, aspiring to “situate the feminine in the natural environment”. The welded frames have a right-angled structure and verticality that is purposeful, suggesting labour and industry. They seemed at home in a museum of horse grooming tools and seed-weighing equipment, while also channelling the obscured histories of female industrial labour, not noticeably represented by the numerous archival images of magnificently moustached gentlemen.

The aforementioned video at the Fashion & Textile Design Centre, is an element of Dave Loder’s audio installation, A Wh( )ly ring(ing), which builds on Loder’s conceptually ambitious practice of capturing and reproducing ambient auditory and kinetic forces. Curated by Mirjami Schuppert and occupying a large room, A Wh( )ly ring(ing) purports to engage with the imperceptible ringing of Derry’s City Walls. It comprises an array of small copper coins wired together, plugged into an audio mixer and outputted to a speaker. This contraption is installed amid an arrangement of geometric fabric patterns, a television displaying the stage, and another switched off and facing out of the window. The premise and aesthetic of the work implies that the copper coins somehow receive phenomena from the environment and make them audible. Only it doesn’t – I can’t hear anything. What I can hear are environmental noises: the electrical humming of the television; the gentle creaking of the windows, as though the white paint was crawling off the frames; the ominous rumblings of a large building’s infinitesimal swaying; the faint, fluctuating sound of air conditioning. If this speaker is actually producing any sound, it is lost amid the noise of the road and the people chatting beneath. But the audio system appears to be producing something, because we can read the display on the audio mixer, which indicates audio tracks are playing in sequence, much as the television plays video on a loop. The other television, inactively gazing out of the window, is even more ambivalent: is it supposed to be playing something, or did the gallery attendants forget to switch it on? A Wh( )ly ring(ing) creates an unreliable narrative that generates friction between trust and knowledge, bringing to mind the distressing disputation around climate science – a subject that is at once ambient and remote, but terrifyingly vast in scale. Whether or not one ‘believes’ in the science, depends largely on our trust in those who practice it. Quite apart from how it might operate under studio or gallery conditions, in this context A Wh( )ly ring(ing) symbolises the impossibility of total, empirical knowledge. We have to rely on trust – institutional and personal – to construct the truth.

The concept of ‘bringing art’ to places where normal people conduct their everyday lives is nothing new, so I don’t honestly consider it an important outcome of New Spaces, as such. However, there is something revelatory about the dysfunction that can occur in off-site projects, where the formal utopian concepts of art practice generate productive friction with the priorities of non-art spaces. But the viewer must be autonomous for this to happen. Civic art programming aspires to contrive a viewing experience – it is a spectacle, however low-key – by bargaining our agency as viewers for an experience of revelation. We need to retain awareness of our agency, and decide how strenuously to exercise it; whether to buy the coffee, or not to buy the coffee…