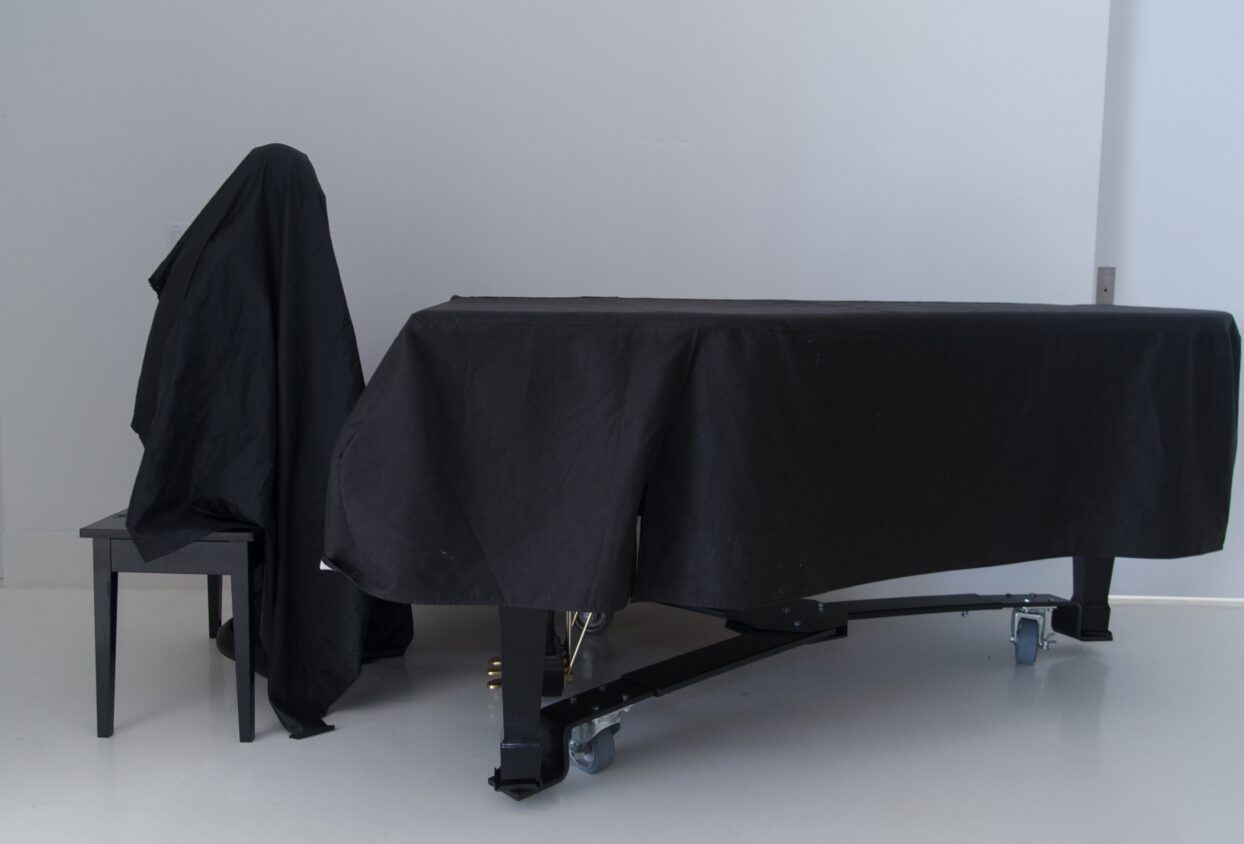 CHRISTOPHER STEENSON INTERVIEWS DANNY MCCARTHY AND MICK O’SHEA ABOUT THEIR SERIES OF NEW RELEASES, WHICH EMERGED OUT OF THEIR PARTICIPATION IN THE ROBERT RAUSCHENBERG RESIDENCY.

Christopher Steenson: How did you both come to be invited to participate in the Robert Rauschenberg Residency on Captiva Island in Florida?

Danny McCarthy: An American artist, who was sitting on the selection panel for the Rauschenberg Residency, recommended us. You cannot apply to go on the residency, as it’s by invitation only. I knew we were to be invited on an American residency, but when this arrived in my inbox it was like winning the Lotto – the terms were so generous. In fact, they were so good that Mick thought it was spam and binned it until I rang him!

Mick O’Shea: Yes indeed, I thought it was like being invited to share in the inheritance of an African princess.

CS: Working together as The Quiet Club, you have recorded a new album, ‘No Meat No Bone’. Several tracks on the album (Jungle Road, Waldo Cottage, Laika Lane) refer to locations on Captiva Island. How important was the residency – its location and the people you met – in influencing this new release?

DMc: The studios came about when Rauschenberg moved to Captiva Island in the ‘60s. A developer in the area was starting to buy up properties on the island. So, Rauschenberg went to many of his neighbours and said, “I will give you one million dollars for your house and you can live there as long as you want, or until you die”. That way, he ended up owning a huge block of properties in the middle of the island and stopped it from being overrun by developers. When he passed away, his son [Christopher Rauschenberg] set up the Rauschenberg Foundation, which now administrates the residencies. The album title comes from something we saw in the kitchen the first night we arrived. So, before we did anything, we had the title.

MO’S: The studio was an empty double garage on Jungle Road, where we could pull the double doors wide open and find ourselves fully immersed in the wildness. We arranged to meet there at 2pm every day to work together. The names of the tracks come from places on the residency. We would have done field recordings in some of these places. The whole atmosphere of the studios was that of intense creativity.

DMc: Outside of that time, we worked on our own practices. As the days progressed, other artists came to listen to what we were doing, and we encouraged them to join in. These included American hip-hop artist Jasari X, poet Jane Hirshfield, dancer Victoria Marks, painter Bob Tanner and British filmmaker Margaret Williams. So, we have a whole lot of separate recordings made from these sessions.

CS: What differentiates this release conceptually, from the other works created under The Quiet Club moniker?

DMc: The work came about by being in that space at a given time. One of our precepts as The Quiet Club is that we don’t talk about what we will do, and we do not talk about it after we have done it.

CS: What conversations were had during the recording sessions?

MO’S: All good conversations are made up of balanced times of speaking, listening, reacting, agreeing and disagreeing. We try to bring this to our playing. Before we play, we are in normal conversation mode – not discussing what we are going to play, which instruments, or for how long, but checking in with each other. When we are playing, we continue the conversation non-verbally.

CS: Danny – What led you to make The Rauschenberg Scores during the residency?

DMc: When being shown around the vast studios, Matt Hall – Rauschenberg’s Chief Technician and Assistant – pointed out several large tables that he had made specifically for Rauschenberg. The tables were scored with Stanley knives, and stained by paints and inks. Some sections of the tables were very beautiful. I took photographs of the parts that inspired me and developed them into large-format prints on some thirty-year-old handmade paper that Rauschenberg had left behind. The title, The Rauschenberg Scores, both refers to the marks on the table made by Rauschenberg and the graphical score that I developed these marks into.

CS: A score is also used by composers to order sound, serving as a set of directions for performers, with ambiguities in the score leading to degrees of interpretation. How do The Rauschenberg Scores fit with the conceptual premise of  a composer?

DMc: The scores are open to interpretation, as both visual objects and scores to be used by musicians or sound artists. I have made other works like this for The Quiet Music Ensemble, including: The Dead (flat) C Scrolls; Listen, Listen Again, Listen Better; and The Great Listenin(g). Interestingly, when I first made these prints, I pinned them onto the studio wall in a horizontal formation. But when I came back the following morning, one of the pins had been removed from each of the prints, so that they now hung at an angle and really looked much better. Matt Hall said that this was Rauschenberg’s doing and I am inclined to believe him. I choose to perform the scores on a grand piano in the main studio building. This was a piano that had been played by John Cage, Morton Feldman and John Tudor, amongst many others, so it carried a lot of history. Whilst doing the recordings alone in the studio late at night, sounds appeared as if from nowhere and were incorporated into the recordings. I really believe that Rauschenberg played an active part in creating the work. The place was infused with his spirit.

CS: In an era dominated by online streaming platforms, how important is it that these releases are experienced as both physical and sonic objects?

DMc: Our releases come in limited editions and are very specifically designed and packaged, mostly by Mick, with accompanying notes, insert cards, texts and so on, intended to enhance the experience of listening.

MO’S: The visual and tactile nature of a LP/CD cover reminds me of when I used to buy LP’s based on the cover alone, wondering if the sound would live up to the artwork. The physical package of ‘No Meat No Bone’ has the look of a 7” sleeve, which is bigger than conventional CD covers; this gives me more space to be creative. The images on four inserts show our time in Captiva. On the back cover is an image of the Fish House, an iconic building on the property. The red geometric pattern, which covers the front and part of the back, relates to the drawings I was doing while on residency.

CS: After your time at the Rauschenberg Foundation, you made your way to the Black Iris Gallery in Richmond, Virginia, where you recorded an improvised performance in collaboration with Stephen Vitiello. What is your relationship to Vitiello?

DMc: Stephen had invited us to lecture and exhibit our work in the University Of Virginia, so we wound up doing a gig in the Black Iris Gallery as well. I have known Stephen for a very long time now. I first met him in 2006 when I curated the ‘Bend It Like Beckett’ CD for Art Trail. I spelt his name wrong on the album credits and we have been friends ever since, as has Mick.

MO’S: In 2010, Stephen was one of our guests when we were on residency in the Crawford Gallery, Cork, as Strange Attractor Ireland (with Anthony Kelly, Irene Murphy and David Stalling). We have played numerous times since then. It’s always a pleasure.

CS: What is your approach to collaboration and improvisation with other artists like Vitiello?

DMc: The main approach we have to collaboration and improvisation with others is the ability to listen. Listening is the core of our practice.

CS: Are there any new projects on the horizon for both of you?

MO’S: We do not talk about it.

Mick O’Shea works with sound, food, drawing, and anything else he can get his hands on. Danny McCarthy is a pioneer of performance art and sound art in Ireland. Christopher Steenson is a sound artist based in Dublin. ‘No Meat No Bone’, ‘The Rauschenberg Scores’ and ‘Black Iris’ are released by Farpoint Recordings. farpointrecordings.com