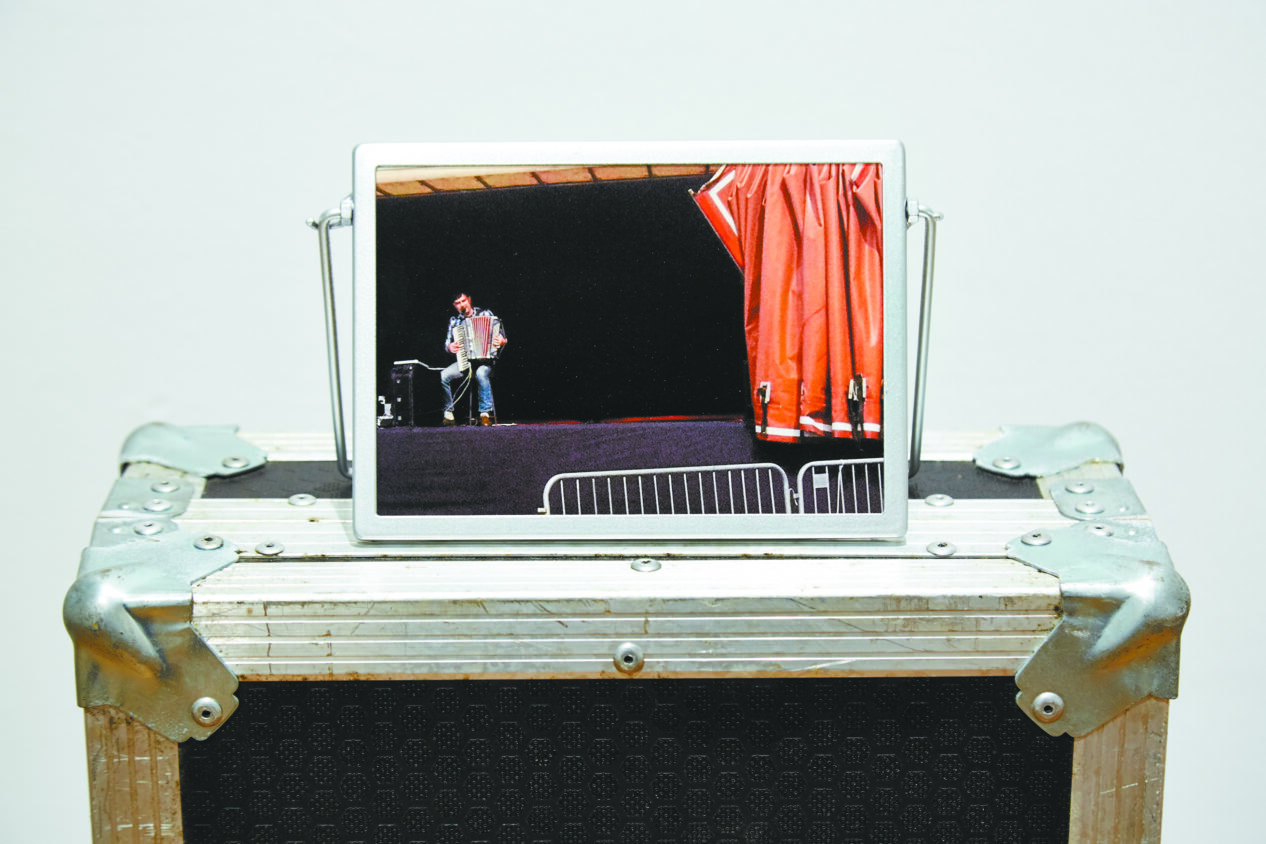 The above may read like the by-products of spring clean that will end up at either the charity shop or the recycling centre. To some extent that is exactly what they are, but on this occasion they are also the edited materials list of Derry-based artist Locky Morris’s recent exhibition ‘Stop Lookin’ at Photographs!’, held at the Naughton Gallery in Belfast.

While well known for his public artworks, Morris is probably most renowned for his politically-themed sculptural installations relating to the Troubles in Northern Ireland, which featured Belfast bin lids and army helicopters. His recent work, and this show in particular, could not be more different. ‘Stop Lookin’ at Photographs’ features a series of new and previously unseen work, including installations, images and sculptural assemblages that focus on the role of the photograph within the artist’s wider practice. Morris intelligently incorporates photography as a genre into his recent work rather than photography as a medium. Though photographs have often featured in his previous works, they were usually incorporated into sculptural installations. In some instances, photography featured without the use of actual photographs, such as in the work Itch, in which scratchings from a lottery scratch card are set under a Jessops magnifier lupe. As you might expect from the list of random, everyday objects from which the installations are made, these works produce an iconography of ordinary life – more specifically the artist’s everyday life. However, the everyday is presented in the extreme, becoming an absurd, hyperactive representation of daily detritus. This is most evident in the piece Loom Band on Turd, a fairly self-explanatory piece in which a digital photo frame proudly displays a photograph of a vertical dog shit with a loom band placed on the top like a crown on its head. Equally, in Frozen Export, a frozen bottle of lager is shown at various stages of defrosting across six printed photographs.

In other works, photography is entangled with other mediums in a more complex way. Teabreakdowns features a mug printed with the image of a mug hanging from an adapted clock radio. This is flanked by images of the decayed pencil used for too many years to stir the tea for lack of a teaspoon. Most interesting though is First Thing, in which a photograph of a contraption made from assorted household materials (wire, cotton buds, an extension lead) is placed above a box containing those same materials. In these works Morris shows his matured skill at blending photography and installation into one single medium.

The Naughton Gallery is a unique space. Situated in one of the wings of the elaborate Tudor-style Queen’s University buildings, the space is about four times as long as it is wide. It can easily feel as though you are walking through a corridor lined with artworks. One of the most satisfying aspects of ‘Stop Lookin’ at Photographs!’ is the curator Ben Crothers’s sensible consideration of such a space. Morris’s work suits the long gallery space perfectly, due to the combination of photography with both wall-based and floor-based installations. In Morris’s varied work, the distinctions between mediums are eradicated and a seamless connection is formed between all areas of the gallery. Furthermore the works in the exhibition equally benefit from the long narrow gallery space as they could easily be overwhelmed by a larger space.

A practice focused on everyday life using everyday objects could easily threaten to become repetitive. Thankfully though, Morris’s works are so precisely focused on seemingly inconsequential incidents and moments that the everyday life he presents becomes wonderfully theatrical and comical. Take for example Michelangelo’s House, in which a photo of scaffolding is printed onto all six sides of a rotating photo cube encased within a glass display case. Or Stop Lookin’ at Photographs, comprising a cardboard box filled with printed photographs, contained within a wood and glass cabinet and topped with a photograph that bears the exhibition title. If this, and Morris’s many other outlandish and absurd image-based installations in this show are not comedy gold, then I don’t know what is.

Iain Griffin is an artist based in Belfast.