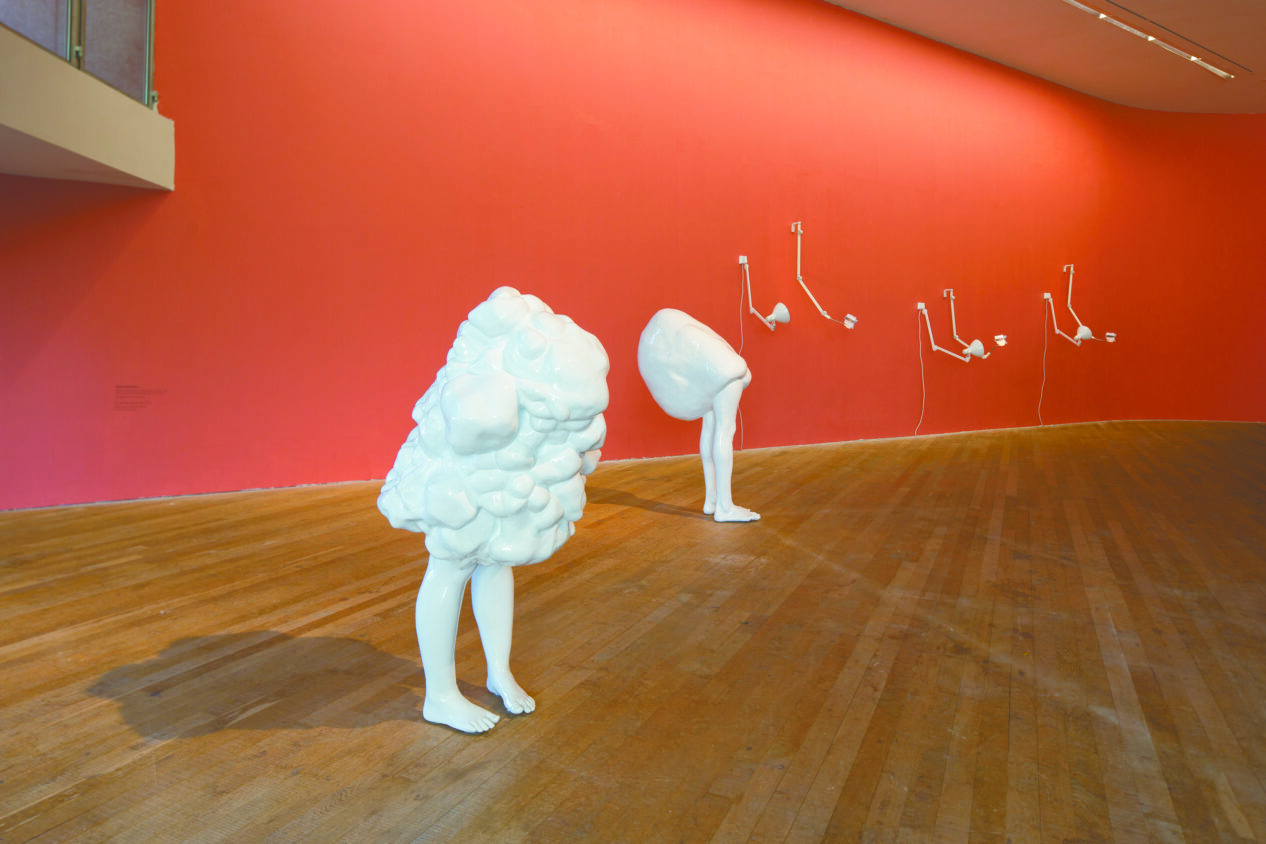 THIS exhibition, curated by Professor John Cryan, Chris Clarke and Fiona Kearney, draws on research by Cryan and colleagues at the Anatomy and Neuroscience department of UCC, in order to “explore how digestion relates to our mental and emotional states”.

A flesh pink wall forms the backdrop to Siobhan McGibbon’s The cell that consumed me (2014). The work comprises three minimal wall-hung lamps and three mechanical hands, each holding a Viewmaster – a device for viewing slides that simulates binocular depth perception. McGibbon has replaced the film slides with cartoonish drawings depicting bodies merging with trolley legs and bulging, blobby, fleshy growths. Venous Malformation (2012) and Proteus Syndrome (2012) are figures created from fiberglass resin painted an immaculate shiny white; realistic and life-size from feet to above knees, they then meld into bulbous, tumorous blobs. The statues’ pristine material seems at odds with the mutation depicted, exaggerating their grotesqueness. These works embody many of the themes and practices that run through the show: art as research laboratory, interdisciplinary crossover, close looking as a tool for acquiring knowledge, the processed versus the raw, a blending of the alluring and the repulsive. In the video The Onion, Marina Abramovic is shown in close-up eating an onion, her face dominating the frame, with blood red nails and matching lipstick. It is easy to be dismissive of Abramovic, her celebrity status side-lining her artwork, but her artistic persona is an intrinsic component of her work. Eating the onion provokes tears; the physical act of crying then becoming the emotion of sadness. The sound of the piece is a combination of atmospheric sounds from the performance: the crunch of the onion, the sniffling and snorting of the artist and a voiceover. The latter is a commentary provided by Abramovic that alludes to the tropes of melodrama and noir evoking the femme fatale. In a jaded voice Abramovic speaks her ennui: “I am tired of waiting for endless passport controls. Fast shopping in shopping malls. I am tired of more career decisions, museum and gallery opening, endless receptions.”

Thomas Rentmeister’s work Untitled (2011) is an enormous wall piece composed of Nutella spread on laminated chipboard. The smell of the Nutella is underwhelming but pleasant. It did taste good though. Just joking! This is a gallery: no touching, unless it is explicitly invited. Should it be called a painting? It certainly resembles a painting with its vast size and expressive swirling brushstrokes alluding to monolithic, monochrome paintings. All this grandiosity is undercut by the aroma of Nutella. Usually the tendency with works of this size is to move back, to capture the whole field in sight. This work invites the viewer to come closer – to become a sniffer! The thick-textured chocolaty swirls bring to mind shit. Is this a shit painting? Is it perhaps a joke on value judgements and taste? Rentmeister’s other piece, a sculpture also Untitled (1993), takes the form of a large, shiny brown resin blob, plopped on the gallery floor. The piece tempts touch with its smooth, shiny, rounded surface, but there is a sign explicitly admonishing the viewer from doing so. Rentmeister’s and Abramovic’s pieces both prompt the speculation that once senses other then sight are brought into the field of art, it starts to become more unstable. The installation by Domestic Godless’s (2016) contains texts and objects which riff off Nietzsche’s theorisations on the correct philosophical diet. A poster describes their experiments in developing suppositories to combat “philosophical, gastric disharmony”. Neil Shawcross’s paintings depict food products, his Heinz Condensed Cream of Tomato Soup (2013) evokes the famous Warhol painting featuring a different brand of the same product. Abigail O’Brien’s photographs of bread-making are surprisingly repellent in their gloopy, oozy viscosity. Sonja Alhäuser’s drawings combine portrayals of feasts and harvests with those of ingestion and excretion. Fiona Hallinan’s (2016) installation awaits an audience that will animate it with their presence. Her sculptural arrangement anticipates the food and the diners that will transform it into a site of conviviality, no longer art but life.

‘Gut Instinct’ attempts to ferment a dialogue between different areas of research, one goal-orientated (science), and the other more speculative (aesthetics). The result of this dialogue is an exhibition that offers many entrances into aesthetic taste.

Catherine Harty is a member of the Cork Artist Collective and works in a variety of media including painting, photography and video. She holds a Masters in Contemporary Art Theory from NCAD, and in Fine Arts Practice from Birmingham School of Art, University of Central England.