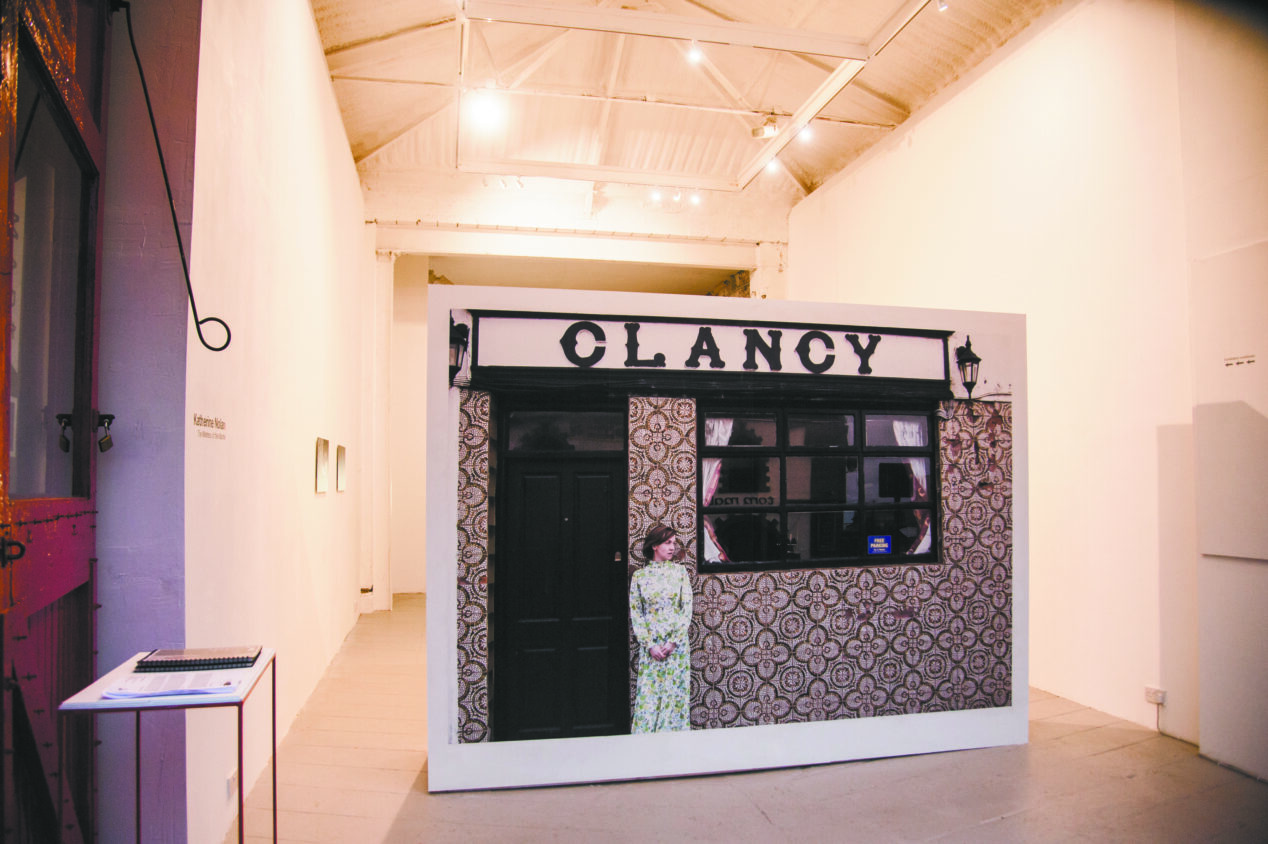 KATHERINE Nolan is a performance artist whose work focuses on her body and her image as sites of investigation into the representation and construction of femininity. Her recent series of performances, The Mistress of the Mantle, held at MART, Rathmines, were based on the artist’s experience of returning to Ireland after 10 years in London. She found that the reality of moving ‘home’ was not quite the return to the fold that she had anticipated. Unexpectedly, this transition marked her symbolic arrival at the precipice of adulthood. Time away and dislocation from Ireland imposed a disruption of the rites of passage between childhood and maturity that are normally cushioned by the stability of family, community and place. Nolan had to grapple with expectations – both her own and other people’s – about how she should fulfil this new responsibility, triggering a re-evaluation of her identity, memory, nostalgia and complex attachment to Ireland. The Mistress of the Mantle distilled what is intuitive but not easily articulated in a series of performances to camera, shot in iconic urban and rural locations around Ireland: the Cliffs of Moher, Sandymount Strand, the Phoenix Park Wellington Monument and the Guinness Storehouse. Mimicking examples of uniquely Irish popular culture – including early pop videos and RTE’s Nationwide – she cast herself in a leading role, “performing a private act of listening to music, whilst very publicly letting it all out”.

I’m Frightened as Much as You was installed in the second space but connected to the first installation, where three of the dresses worn by Nolan in the videos were hung reverently in tricolour formation. Somehow they appeared as outsized robes in a ritualistic colour palette of emerald green, bright orange and pristine white. The style of these garments was typical of the 1970s but also somewhat reminiscent of priestly vestments. This simple installation touched on nationalism, Catholicism and popular culture, while also alluding to the pinioned position of Irish women living under those powerful doctrines.

Breathless comprised a single-screen video in the second gallery. This time wearing a shoulder-padded black dress, Nolan moved away from the twee John Hinde era of the 1970s to the edgy 1980s. Shot in the cobbled streets beneath the Guinness Storehouse, Nolan sings with wistful melancholy, but her voice is muted and the only audio is the static of wind and traffic. Despite time having moved forward, the 1980s represented a dark period for Irish women and one that continues to directly impact Nolan’s generation today. Her performative practice has for several years foregrounded the flesh and blood of femininity in the face of powerful forces. She unmasks the seemingly unpalatable truths of female biology that are hidden behind idealised and illusory notions pertaining to the status of women in Ireland. A series of still photographs were also included in the exhibition that took a closer look at the contradictions of Nolan’s modernday interpretations of the past. In the most striking image, Nolan stands emotionless beside a dull Christmas tree in front of dreary brown curtains, as though hostage to convention. Wearing another classic 1980s dress in blue satin damask, she captures this period perfectly. Another image depicts her looking straight to camera, holding a tea cloth in her hands with fatigue, disappointment and bewilderment perceptible in her drained expression. Both images manage to imprison her in a timeless loop of history repeating itself. Another pair of still images observe her engaged in ‘innapropriate’ behaviour, crawling over a dining table and using a dinner plate as a pillow. The gallery text notes that, while contemplating becoming “the models of womanhood that she observed as a child”, Nolan experienced a range of emotions from catharsis to narcissism. In my view it is no wonder, given the sheer weight of expectation surrounding this subject and the complexity of these encounters.

Images: Katherine Nolan, The Mistress of the Mantle, 2017; photo by Seamus Travers.