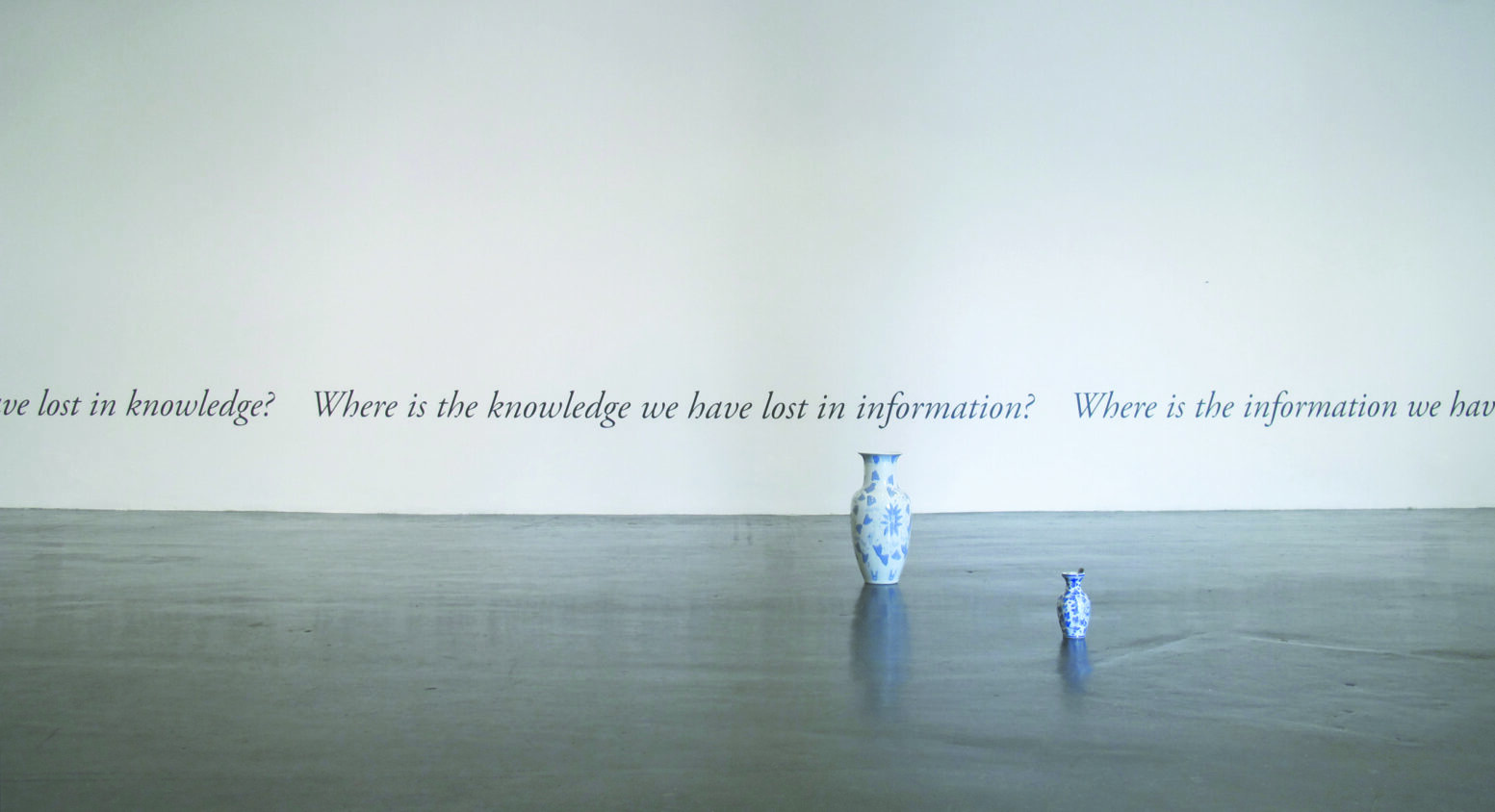 [Infinite Jest] can’t be read at a crowded cafe, or with a child on one’s lap.

WINNER of the 2015 Emerging Visual Artist Award, Jonathan Mayhew is one of those artists whose work requires a space where you can hear a pin drop. Wexford Art Centre (WAC) is not that space. Perhaps Mayhew’s exhibition of new work would have fared better in the attention stakes during the recession, when such regional art centres were empty saloons in ghostly Westworlds. During my visit, the endless stream of visitors to the cafe and the hoofing of piano peddles with woohooing children upstairs was a sign of the times. But, there is a big BUT to all of this, which I will get to later.

Floor-bound ceramic vases with silver tags catch my eye due to the overall sparseness of the exhibition. Up close these silver tags become USB sticks attached to the inside lips of the vases. There’s a video work on a flat-screen TV that presents constellations of blinking and revolving white text against a black backdrop. One cartwheel of text reads something like “silence is the only communication”. This work’s big sister is projected in the gallery upstairs and dishes out sentiment over statement, poetry over authority. Further along there’s paper that has been exposed to moonlight in one instance and sunlight in the other. With the subject of time so prevalent throughout, Mayhew has perversely displayed a clock without hands or digits above the titanic hull of the reception desk: most will miss this temporal black hole. But there’s a lot ‘missing’ here: a musical score by Gustav Mahler is played on a standing speaker when the gallery is closed; readings are performed there and everywhere but never here; and there are no flowers for the vases, which turns them into bed pans, no?

Parts of faces are missing too in the folded photographic portraits of dystopian mid-twentieth-century authors, from George Orwell to Aldous Huxley. The integrity of these photographs, these references, is respected due to Mayhew’s minimal folding for maximal effect, which leaves Orwell mouthless and Huxley eyeless.

On another wall we have vinyl text with questions lifted from T.S. Eliot’s Choruses from The Rock (1934). The extracts question if life, wisdom, knowledge and information are being lost to one another in the dash of late modernity. Mayhew has added one or two sentiments about data and metadata that are adaptations of Eliot’s choruses for our times. There is no ironic stalemate to ‘get’ or new insight to take home; the artist is just innocently asking.

So what does it all mean? Mayhew wants us to make up our own minds. But I always think that stance is a con. For me the artist offers up a wealth of references that ping-pong between existential loss and redemptive love: philosopher Emile Cioran and writer David Foster Wallace are definitely here in spirit.

From this defining spirit there is a sense that Mayhew is tapping into the cynicism that still pours through the veins of people who grew up watching Seinfeld. However, there are efforts on the part of the artist to embrace and project something sincere, although Mayhew is not offering a happy ending or indeed any ending at all.

Félix González-Torres succeeded in marrying Duchamp’s anaesthetic readymade with feeling at a time when this wasn’t such an obvious act. However, the artist wasn’t motivated or conditioned by technology; love and death were both his muse and burden at a time when the two became tragically entangled in the 1980s AIDS epidemic. Mayhew’s work also runs parallel to current romantic conceptualists like Lebanese artist Charbel-joseph H. Boutros; however, where Boutros’s work is haunted by the shadow of his war-torn homeland, Mayhew doesn’t carry – or at least doesn’t advertise – such a burden.

I ended up asking what Mayhew’s motivation was. I also questioned what the differences are between artists that draw from a deep personal well (like the 2014 award recipient Dragana Jurisic whose work explores the concept of exile) and those that skim the surface through word games and design, á la Liam Gillick.

Due to the wealth of Mayhew’s literary, technological and art historical references I sometimes got dragged down at the expense of connecting with Mayhew the artist (maybe those USB sticks contain Mayhew’s digital DNA?). There’s a sense of dissociative tourism in his work that lacks a deeper connection with a subject, connections that make artists such as Miroslaw Balka so compelling. There is no anchor here; the context is everything rather than something.

But that’s the point. Mayhew is not taking ownership of a specific context to define him and his art like everyone else; everything is his context. With life breezing in and out, WAC is the pitch-perfect space to experience Mayhew reflecting back this ‘everything’ rather than just himself or some claimed subject or inherited trauma. An artist of our time.

James Merrigan is an artist based in Waterford.