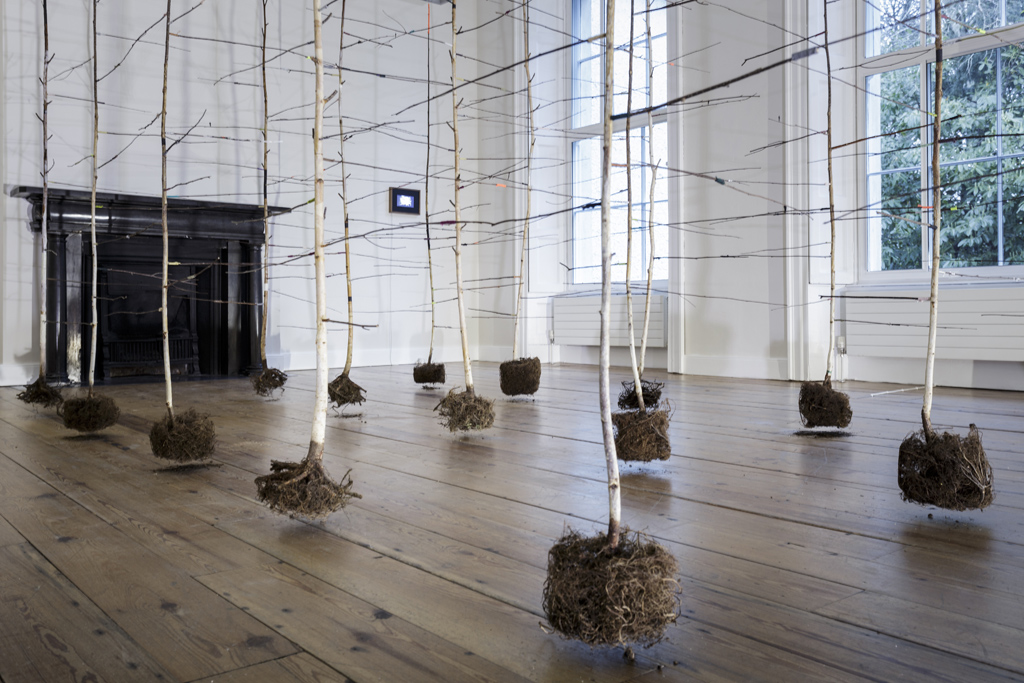 The Past Is A Foreign Country, Anita Groener. The Dock Arts Centre, Carrick-on-Shannon, 19 January, 9 March 2019.

Stories of displacement are not aesthetic. These are rushed, unplanned, reactive situations, without much time or resources for calculation or intention. Perhaps this is part of the reason why many people find it hard to identify with asylum seekers; it is difficult for most of us to comprehend such an urgent need to escape danger and to find a safer place.

Anita Groener’s recent exhibition at The Dock captured this challenge, before we even approached the work. The title, ‘The Past Is A Foreign Country’ – taken from the opening of L. P. Hartley’s novel, The Go-Between (1953) – highlighted this sense of detachment. Spread across three gallery spaces, the work itself aimed to negotiate this distance by identifying and portraying individual experiences. The challenge was to situate these stories within a global historical narrative of ‘refuge-seeking’, while simultaneously recognising that each account belongs to an individual.

Gallery 1 hosted the titular installation, featuring trees hanging in mid-air and linked by bandages, creating an organised, straight-lined matrix. Rather than being rooted in place and nourished by land to grow branches or leaves, these displaced trees were dry and completely dependent on the structures that kept them upright. The same space also included a video, titled Nest (2018), showing a bird’s nest being broken into twigs by a pair of hands in the dark. These pieces made a strong opening statement on both the subject matter of displacement and on Groener’s recurring visual motif – drawing in both two-dimensional and three-dimensional space.

Gallery 2 carried the narrative thread from the natural world back to society. A large circle of twigs, mounted on the far wall, acted as a diorama of sorts, holding miniature silhouettes of individuals or groups as they travelled along the dark offshoots. Some scenes were expected, like a group of women carrying parcels on their heads as they walk, but some stung with poignancy, such as the man standing with his arms raised, presumably surrendering to an unknown pursuer.

On the opposing wall, five animated drawings, titled Moments (2018), featured short snippets of news interviews with children displaced from Syria. Even when they were standing still, the characters were animated, as if at any moment these children would continue with an update on their current lives. Minimal, hand-drawn lines were traced around those featured in the footage, reducing the emotional content of these scenes to their most essential and making them difficult to leave behind once viewed.

A series of five ink and gouache drawings on paper was presented in Gallery 3, further embodying the allegory of drawing as social practice. Created line-by-line, dot-by-dot, these drawings are an exercise in focus. Each mark is different and unique and has its own moment of creation. In the gallery’s mezzanine space, the narrative seemed to suddenly shift from local to global once again, with a looped video, entitled Blink (2018), showing thematically-arranged photographs of international victims who have all been displaced. Though the images in this film were primarily presented in greyscale, some colours were introduced periodically, to highlight a particular character or moment in time, which offered moments of relief to the intense sequence and the viewing experience. This piece also provided the loud, deep, heartbeat audio that resonated throughout the three gallery spaces.

In contemporary western society, we are trained to be audience members – a mode that is more often used cynically, to manipulate and numb our responses to injustice. Groener uses this contemporary disposition to demonstrate the empathy we are capable of, when someone else’s story is relayed to us with care. Walking through ‘The Past Is A Foreign Country’ was, without a doubt, a challenging experience. The artist persistently played with our capacity to alternate between long-shot frames and extreme close-ups, from painful story to global impact, and vice versa. Drawing being her primary medium, the artist carefully placed lines, markings, and lighting to create beautiful shapes, while making sure individual elements did not get lost in the process. Overall, the exhibition allegorically uses visual manipulation to take a compassionate political stance.

Moran Been-noon is an independent curator and artist based in Dublin.
mobespaces.wordpress.com

Feature Image:
Anita Groener, The Past is a Foreign Country, 2019, installation view, The Dock; photograph by Paul McCarthy.