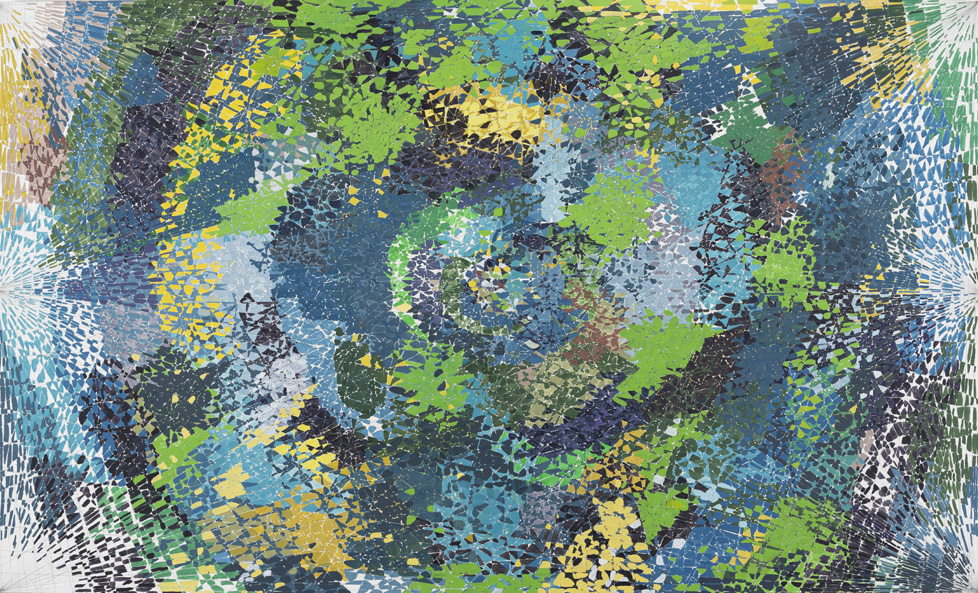 ‘Poulaphouca’ at the Butler Gallery is Sam Reveles’s first large-scale solo exhibition in Ireland. The fourteen works on display in the four adjoining galleries include Reveles’s most recent paintings and works on paper. The exhibition is a journey of an experience which demonstrates the development and shifts in Reveles’s work over the last few years.

In the first gallery space, one of the artist’s earlier works, Cill Rialaig 2, is an elemental example of his previous ‘grey’ period. The paper is approached episodically; an underlay of grey wash is erased by a lattice of horizontal scratchy marks. This method of creating through destruction is haphazardly deployed, revealing the layers and excavated glimpses of embedded arcs and veins in white and stone. In the past, Reveles has been labelled a “graffitist”, as well as a “gestural abstraction painter” and “a scribbler”. His artworks combust in tangled lines and they are energetic, chaotic and frenzied. However, as observed in this exhibition, there has been a defiant shift in his recent work.

Gallery 2 is subdued and still. The four gouache and pencil works on show seem to construct the pictorial schema with the architectural coherence of structural lines. Poulaphouca #2 has six points where the (possible) perspectival lines meet, dissecting the otherwise blank paper into shards and splinters. Reveles has attempted to encapsulate the three-dimension quality of landscape into a reduced and distilled representation. It’s as if a kaleidoscopic camera obscura has been used. The traditional organisation of the vanishing point, horizon and field of projection have been reconfigured to produce a constellation of shattered pieces. Although the perspective has been pinched and pulled, a certain depth is still present; the two large concave forms meet at the centre and there is a darkened sinking sensation.

It is important to know that Poulaphouca is a reservoir to Blessington Lakes in County Wicklow – a body of water spanning more than twenty kilometres. Having spent a lot time at these lakes myself, I wonder if these plotted lines represent actual viewing points? Is this an aerial view of Poulaphouca, mapping the myriad of surveying sites that circulate the lakes? As an abstract representation of the place, these artworks appear to dismiss the limits of time and distance, instead seizing upon a more dynamic form of observation.

In the final space, the exhibition culminates with three large oil paintings. Recurring Dissolution epitomises Wicklow as the ‘Garden of Ireland’. The complex composition breaks the horizontal frieze into a multitude of coloured facets: vermillion green, canary yellow and cornflower blue. The same accumulative layering is present here – the blank canvas is exposed with its mapped measurements in pencil, while clusters of colour build up to form a concentric motion. Throughout the work there are small conscious gaps of bare canvas, perhaps rendering dappled light on the water or rays caught within the trees. Reveles is transfixed by the constant transformations that occur in nature, capturing its moving moments and emphasising our failure to ever connect with it entirely.

It is evident that Reveles has a very meditative relationship with nature. There is a particular essentialism in his work, whereby he persistently alludes to a deepened spirituality, successfully conveyed through the process of abstraction to individualise features and enhance essential forms. Reveles’s paintings also encapsulate his own experiential relationship with the landscape of Poulaphouca. In a fronto-parallel medium, he offers the viewer a plurality of encountered moments that have been imprisoned upon a singular surface – defying space, time and distance. The result is an ethereal and weightless portrayal of the place with a compelling electricity, as if channeling the functionality of Poulaphouca reservoir, where hydroelectric energy is harnessed to an electric means.

In all, Reveles has personalised the process of abstraction and, in my opinion, has made it approachable and familiar. To engage with this exhibition, time is needed. The works demand extended engagement, to fully observe them and to immerse oneself in the immense landscapes that the artist is depicting.

Rachel Botha works in Poetry Ireland and is a freelance art critic.