Described as Ireland’s annual anthology for the arts, Winter Papers is published each year by Curlew Editions, based in County Sligo. It features newly commissioned writing across a wide range of disciplines, from visual art, photography and film, to theatre, music and poetry. Short stories and interviews are established formats, which sit alongside experimental texts and assorted photographic images – printed matt in black and white, as if to soothe tired eyes, accustomed to screen-reading all year round. Though welcomed by a general arts readership each year, the sheer quality of the collected texts makes Winter Papers especially attractive to other writers, who empathise with “the thankless aching feat of writing” (p175), while marvelling at the perfectly composed sentences found below the gold-embossed, linen-wrapped cover.

Edited all summer long by writer, Kevin Barry, and academic Olivia Smith, Winter Papers arrives just as Ireland is acclimatising to darkness. In this regard, many readers treat the anthology as literary nourishment for the winter months, perhaps saving it for quieter moments during the festive season. Certainly, each edition resonates wildly with the kind of cyclical introspection that winter brings. Published just after Samhain, and coinciding with the Winter Solstice, Winter Papers often coalesces around pagan themes linked to magic, ritual, death and birth, as well as invisible, ancient thresholds with our ancestors. It has become a treasured space for writers to articulate humour, insight, longing and grief, in an effort to locate hope in the depths of winter.

Unusually this year, I set myself the task of reading and reviewing Winter Papers Vol. 6, ahead of VAN’s pre-Christmas print deadline. I committed to a first round of skimming (to get some notes down) but was quickly seduced into reading every single word by strikingly vivid phrasing and full-bodied metaphors. Golden nuggets include descriptions of  “a fridge purring coldly” (p33); “pewter-polished, winter-boned birds” (p174); a dubious character with “eyes the yellow of old cue balls” (p61); and an unborn baby likened to an “amniotic ghost” (p108). These are punctuated by hard-won analogies, like the “rot-orange glow” of a lamp that casts a dying man’s room into a “shadowy baroque composition” (p29); the internet likened to a “draping veil of frenetic meta-reality” (p71); or love being described as a “minotaur that has hurt her again into poetry” (p69).

Like Kevin Barry’s own writing, Winter Papers is unflinching in its collective portrayal of the messiness of human experience. We find vivid accounts of the decimation of the body through illness; the matter-of-fact unravelling of the heart through infidelity; and the collapse of meaning brought about by death and mourning. The latter becomes especially poignant with Volume 6, as we realise that much of the writing was developed against a backdrop of mounting contagion and daily death tolls. Some of the authors track the anxieties of COVID-19 day by day – like Oliver Farry, who was living in Hong Kong when the virus broke. Others lament the isolation of quarantine, including Susan Cahill, whose elegant prose follows the transition of her pregnant body during lockdown, referring to the ‘new normal’ as a “dazed foliage” lying beneath our current uncertainties.

Aside from the pandemic, other real-time urgencies and unforeseen synchronicities are chronicled within the sixth edition. These include references to the Black Lives Matter campaign, as well as Roisin Kiberd’s timely mention of 5G conspiracy theories, ‘fibre-tapping’ and a “paranoid history of hacking” – from the Cold War to modern-day whistle-blowers. Dónal Geheran’s ink drawing, Guston Rearranged (2019) (p135) also resonates with the controversial postponement of the Philip Guston retrospective in September 2020. 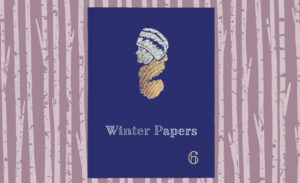 Volume 6 features over a dozen short stories – none too long, some tantalisingly brief. Memorable characters include the young woman in Oisín Fagan’s ‘Daddy’, who witnesses the respective unravelling of her dying father and chain-smoking mother; or the downtrodden farmer’s wife and her morally bankrupt husband in Louise Kennedy’s ‘Imbolc’. Particularly moving are John Patrick McHugh’s descriptions of dementia as a “dreamscape”, bereft of chronology or plot, which holds “an undercurrent of real memories, events, details and narratives”. I also enjoyed the protagonist in Una Mannion’s ‘A False Crawl’, whose adventurous (and occasionally fugitive) best friend reflects the free and forgotten part of her younger self, now buried like turtle eggs in the sand.

Other writing formats include diary entries, criticism, feminist polemic and psychogeographic accounts of distant cities. Dominic Stevens’s speculative fiction imagines the dark recreational subcultures that emerge around a new ‘dream therapy’ drug; while Martin Dyar reflects on the training of undergraduate medical students in the arts and humanities, to combat the “alienation of medical inhumanity”. In this way, Dyar attests to the “luminous power of poetry in the shadow of the pandemic”, as well as illness more broadly (p182).

There is a diverse array of fascinating interviews in this edition, offering insights into the working methods of musicians, filmmakers and street artists. As well as the brilliant, BAFTA-nominated Irish actress, Niamh Algar, we also hear from Louise Lowe and Owen Boss of ANU Productions, who discuss their socially-engaged research methods, which are embedded in place and extend over time. In highlighting voices on the periphery, ANU prioritises participation and equality of access, to allow others to tell their stories. Most enchanting of all is Doireann Ní Ghríofa’s gently paced interview with Eddie Lenihan, whom she describes as a “maestro”, all “long wild locks and whiskers”. We read about Lenihan’s lifelong devotion to the dying art of storytelling, originally motivated by “the vision of a world being lost before our eyes and no one caring enough to preserve it.” A determined foe of modernity and defender of the Aos Sí (fairies), Lenihan cares deeply for people, their stories, landscapes and dialects. He has mastered the quiet diligence of assembling a collection of folklore recordings and is the sole custodian of this remarkable “repository of voices”.

Among the more experimental offerings, I appreciated Chiamaka Enyi-Amadi’s ‘The Moon is a Healing Being’ – half a page composed as a single sentence, whose gentle meanderings propel the reader forward, yet seem to span an eternity (p181). Another robust highlight was ‘I Know, But Only Just’ by Claire-Louise Bennett and Ruby Wallis, which sets out to reclaim patriarchal interpretations of the myth of Pandora’s Box – perceived as a receptacle for human (female) temptation, regret, guilt, affliction, rage, jealousy and hysteria. Traditionally portrayed as a deviant whose curiosity doomed humanity, Pandora has been cursed throughout the ages because she questioned the imposed order. Pandora’s Box is reframed by the authors as a metaphor for new parts of the psyche, which when opened, add complexity to the world. The text is punctuated throughout with strange hieroglyphic symbols, later revealed as denoting a varied group of contributors, mostly female writers and artists. This co-authored approach is reminiscent of the ‘cut-up’ technique, pioneered by Dadaists and Surrealists and popularised in literature by Beat Generation writers like William S. Burroughs. This methodology is proclaimed from the outset, in the text-based montage, cuttings (2020), with several other photomontages appearing periodically. In addition, occasional words or phrases are printed upside-down or backwards – received as a form of backmasking or encoded message. This idiosyncratic formatting is accommodated with agility and precision by the designer, John Foley, whose attentiveness further galvinises the anthology’s reputation for quality and care.

Joanne Laws is Editor of The Visual Artists’ News Sheet.