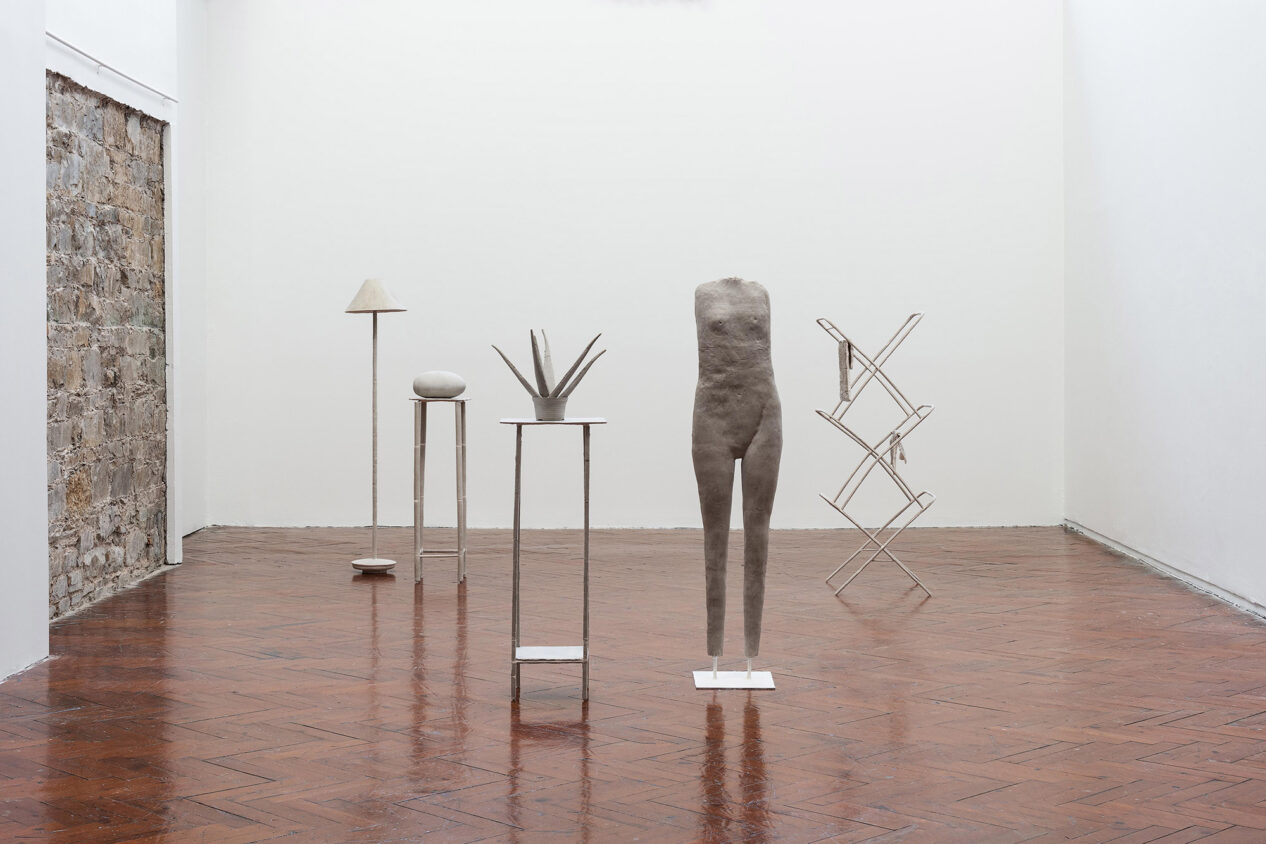 ‘A quiet mutiny’ by Daphne Wright is a sculptural exhibition, showcasing the artist’s skills, techniques and competencies across the materials of clay and film. The exhibition is dominated by over 30 pieces of sculpture, made from unfired clay – the epitome of a hands-on material. In order to sculpt with clay, the artist has to touch and bring close this flexible material during the process of making. Such gestures chime with the ‘humanist’ themes that are present in the exhibition, signified in large part by the clay sculptures on display, depicting an assortment of domestic objects. A fridge door, Zimmer frame, shopping trolley, clothes-horse, and rug – all of these objects surround us at different stages of life, from infant, to child, to adult and into our elder years. The sculptural depends on the forming and placing of an object, so that it stands out from the ordinary stream of our world. Making works emerge from the reservoir of the domestic world, as Wright does, plays with the limits of the sculptural.

On the back wall of the ground-floor gallery, there are 18 pieces lined-up – six upon each of the three shelves. These pieces are more like masses of material than fully formed objects – nothing identifiable, but familiar and relatable nonetheless. Some look remarkably like ginger roots in their rhizomatic form, others more like half-alien bodies. They are at the stage where forming is still taking place. Similarly, there is a strange-yet-familiar quality to the video piece, Song of Songs (2019). This work features an assemblage of two humans – a middle-aged man and a more senior woman – facing the camera, her raised hands held open by his, both connected as one. They engage in a performance that seems to be improvised in the moment of recording. She chews, he hums, he covers her eyes with his right hand and she stops chewing, sounds and gestures that allude to the warming up exercises of actors and singers. Splutters of enigmatic dialogue are emitted: “Excuse Me! … Excuse Me! … Feeds itself! Nay, nay, nay breathes itself! Nay, nay, nay.… Monster.” I’m tempted to say there is something Cthulhuesque being signified, but the characters do not emit a sinister aura. Wright has referred to her films as ‘notebooks’; as storage spaces for ideas relating to her sculptures. The video thus raises the interesting question of what is sculptural in film. If we take it that one is based on making objects and the other on movement, then here the positioning of the actors bears the clear mark of sculptural thought, exhibiting an understanding of the affects released by specific distancing and dimensions. They kneel but are framed to confuse the viewer’s sense of how they are placed.

Song of Songs also stood out in contrast to the exhibition’s uniform colour palette, dominated by the cool, chalky-grey tones of unfired clay. In Wright’s second video piece, Is everything okay? (2019), an old man robotically recites phrases from the worlds of business and health care. The application of face paint depicts the man as a lion, making him resemble a speaking sculpture. The face paint’s faded quality underlines the forlorn quality of the film. In fact, it should be noted that muted colour is used across all media in this show. In the eight watercolours of the ‘Little Sad Face’ series and in the clay plates, colour is deployed so faintly as to give the impression of fading away, hence adding pathos.

Many of the sculptures play with the fragility of structure. The pencil-thin frame of Shopping Trolley (2019) expresses this structure-essence-fragility motif. When light shines on it from behind, its frame seems doubly threadlike and insubstantial. Another piece, a sculpted cat on a pedestal, was so fragile and precariously set in place that it had been broken by the time I made my first visit to the gallery. It was returned when I next visited, but I couldn’t help think how the absence of this sculpture somehow underlined the compositional qualities of the collective works.

The large sunflower sculptures that form the bulk of publicity material for the show are towering examples of both the aesthetic and human themes that inform the exhibition. They are lanky yet stable, potted in very ordinary buckets, their pathos is that of the colourful and lively, gone droopy and drained of colour. These flowers cannot be separated from art historical references to Van Gogh. But Wright’s take on the sunflowers – as with her take on all the objects in the exhibition – draws our attention to the specificity of sculpture’s affects.

John Thompson is an artist, art writer and researcher whose interests are conceptual art, politics and materialist philosophy. He is also a co-curator of the Guesthouse Project, Cork.