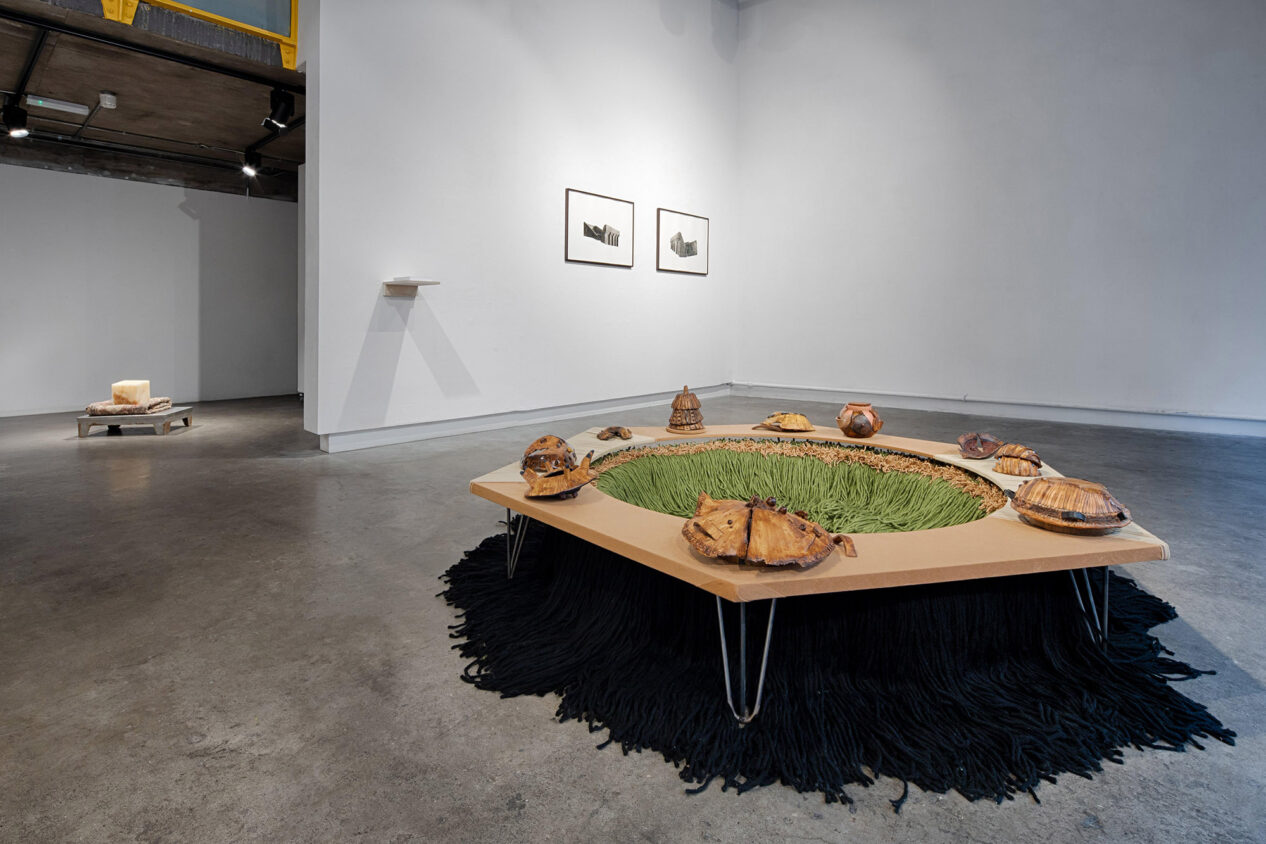 ‘Past/ures’ at the Library Project, Dublin, opened during the same week that over 400 farmers from all over Ireland reluctantly deserted their farms and descended on Dublin’s Merrion Square in their tractors to demand a new deal with the government and a fair increase in price for their beef. These notions of abandonment and defying the odds resonate throughout all of the offerings in ‘Past/ures’, which was curated by Leah Corbett, the recipient of the Black Church Print Studio’s Emerging Curator Award 2019.

Caitríona Leahy’s prints, Monument to Memory I & II (2011), recontextualise the familiar by extracting abandoned handball alleys from their environmental surroundings and depicting them instead as mysterious monolithic structures, floating in a timeless realm, the echoic architecture accentuated in a crisp monochromatic muteness. In our contemporary collective consciousness, these structures may now be viewed as naive as any folly, dormant of love and players, yet through Leahy’s intentions these redundant structures take on an almost spiritual monumentalism. She excavates a series of ambiguous tensions that swing between memory, temporality and utilitarian concerns around our collective occupation of architecture.

A block of salted beeswax rests on a folded rug atop of a rusting galvanised metal stand. Katie Watchorn’s forlorn sculptural work, A Calf Remembered (2018), speaks of dependency and considers the shared intimacy of an animal’s narrative in the context of farming. It quietly confronts us with a creed of vulnerability, whilst we encounter what feels like an orphaned entity. The work reads like a poem of three verses. The preserved organic substance nestled upon the domestic, momentarily shielded from the inevitable cyclical agricultural reality. This layering and the sensitive economies of language and form are what we have come to expect from Watchorn’s multifaceted practice.

A cold light convincingly bleeds, framing another galvanised structure in Dorothy Smith’s oil painting, Mathew’s Cow Shed (2009), as she interrogates the contrasting linear interior of the fallow building. On the squelch of the organic floor, lays a mysterious white object, perhaps discarded by the occupants of the composition who have now all but vanished. Smith’s second painting, The Dairy (2009), plays with similar compositional observations, this time a hefty yellow hose trails from the foreground into an open steel door, like an umbilical cord connecting us, the viewer, to the darkened interior. Smith deftly illuminates these momentary stillnesses, lending them a contemplative vigour that roots us deeply in the world she depicts.

Ronan Smyth’s Westwood Jazz No.27 (2019) is a tactile cacophony that smirks with an array of unnatural materials, yet still speaks to organic form. A series of impractical polymer clay vessels and objects adorn a circle cut from an MDF frame, brimming with mossy green fringes, defining a black velvet pit. Smyth evokes a sense of playful futility with this materiality that synergises the labour of the artist and his agricultural environs. There is a creed of campness at play here that is seldom articulated in a rural context, whilst the friction of form confronts palpable generational tensions.

“We carry the weight of the past – the gaze of someone else is always present – another viewer, another father”. Hayley Gault’s text, Things me and my father have in common (2018), is a homage to both her heritage and the resilience that she and her father share in spite of the strangling vice of global capitalism. Gault meditates on the solitary labour of the artistic and farming communities that “replicates that of many other dispersed individuals, working in their own way”. It is an emotive consideration of isolation and togetherness that is reminiscent of Seamus Heaney’s poem, Digging (1966).

‘Past/ures’ is a contemplative window offering us a view of contemporary rural life that brings together a group of artists who are very much immersed in the culture of cultivation. Corbett’s consideration of the fertility of both the Irish soil and the artist’s perspective goes beyond the poetic and the metaphorical. ‘Past/ures’ does not romanticise our agricultural heritage. It speaks of solitude and collectivity, of loss and resilience without ever leaning on nostalgia. It depicts an Irish landscape, without the saturated green pastures of optimism; it problematises the precarity of both artist and farmer as they look upon a shared horizon, and yet press on with the practice and production of hope.

Brendan Fox is a writer, curator and visual artist based between Dublin and Rome.