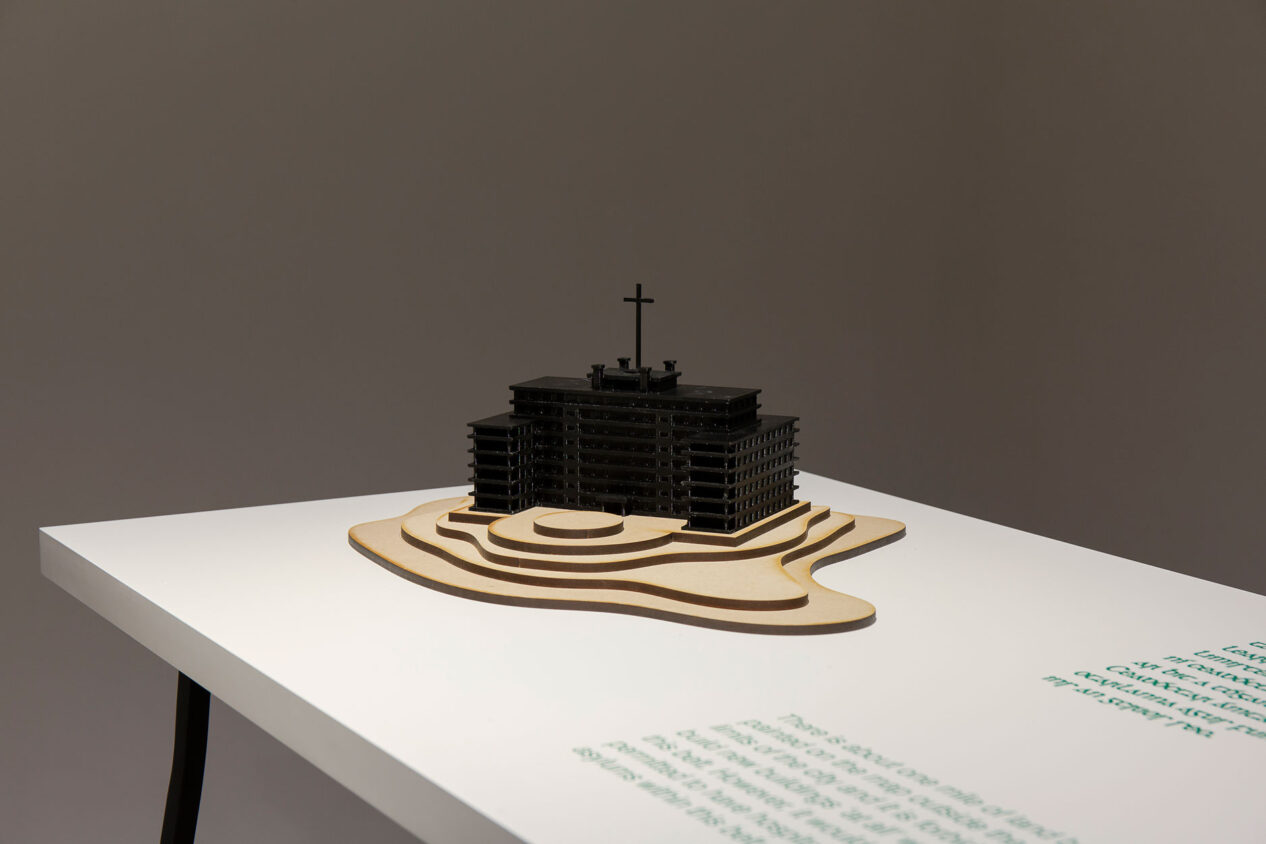 Doireann Ní Ghrioghair’s recent exhibition, ‘Declaration of the State Metropolis at Tara’, presented a series of new sculptures, which reimagine the work of architect Daithí Ó hÁinle, who mapped plans for a new capital city for Ireland at Tara, County Meath, in 1942. Ó hÁinle was a member of Ailtirí na hAiséirghe, a far-right political party formed in the same year, whose stated aims included transforming Ireland into a fascist, one-party Catholic state, where emigration would be criminalised and the speaking of English forbidden. As no actual drawings exist for Ní Ghrioghair to work from, she took inspiration from Ó hÁinle’s florid title for his project, ‘Maoidheamh ar Árd-Cathair Stáit I dTeamhair’ (Declaration of the State Metropolis at Tara), and his patriotic nomenclature for individual elements, such as a ‘National Avenue’ and ‘A Garden of Heroes’, which would house the ‘Column of the Resurrection’, destined as a location for “important national displays”.

Having recently undertaken a research residency at UCD’s College of Architecture & Engineering, Ní Ghrioghair based her version of the Garden of Heroes on the Garden of Remembrance, which Ó hÁinle was latterly responsible for. The city plan included amongst other civic buildings: a City Hall, Parliament Building, Sports Stadium and a Cathedral – Ní Ghrioghair’s model was based on the Basilica at Knock, which Ó hÁinle designed in 1976. During his time as Dublin City Architect from 1959 to 1965, Ó hÁinle completed a number of social housing complexes, which Ní Ghrioghair uses as templates for his proposed ‘seven-floor flats in which there will be lifts’ – identical to the Kevin Street Lower flats, around the corner from Pallas. It is unsettling that Ní Ghrioghair could draw so easily from Ó hÁinle’s actual work to elucidate his bizarre and unsettling vision for Tara. Setting aside retrospective judgement on the absurdity of Ó hÁinle’s dystopian proposition – elements of which were eventually realised and became iconic in Dublin – Ní Ghrioghair favours a skilful reinterpretation. Her sculptural installation becomes a form of ‘disclosure’, unpacking a Pandora’s box of cognitive and emotional confusion about the origins and intent embodied in the architectural heritage of the city.

At Pallas, the architectural models are placed on modern white tables, arranged in a neat rectangular grid, each one accompanied by a short bilingual description in green vinyl lettering. On one side, the text is presented in Irish (using Cló Gaelach typeface) and on the other, in English, suggesting that the project should be viewed as an ‘international expo’. The models are 3D printed in a shiny black material (not specified), hardened into delicate miniatures in various architectural styles, from neo-classical to modern. They are smaller than one would expect for a ‘mock-biennale’ showcase. Amid fairly dim ambient light, the tables and models are spot lit, casting dynamic shadows in many directions onto the various surfaces in the space.

The models are dark and inky and in this environment require very close observation to appreciate the extraordinary level of detail Ní Ghrioghair has achieved – multiple layers of miniature arcading, tiny columns, the dome of the Parliament, spires topped with spheres, the startling familiarity of the ‘seven-floor flats’, and the hospital crowned with a disproportionately large cross. Throughout the buildings there appears the repeated use of the Ailtirí na hAirséighe emblem, made up of the Cló Gaelach ‘E’ (for ‘Éirígí’, meaning ‘rise up’), with a vertical stroke through the middle producing sinister associations with the German Swastika. The text descriptions emphasise how each building would be placed strategically within the topography of Tara and be visible from different approaches to the site. Ní Ghrioghair used contoured MDF layers, to mimic the rise and fall of the landscape.

The accumulated impact of components – which are so exact, detailed and perfectly crafted – clashes conceptually with the background story. Historians have documented the phenomenon of sympathetic fascist sentiment and popular support for the Axis powers during the 1940s in Ireland – Ailtirí managed to secure nine council seats in the 1945 elections. Ní Ghrioghair has dredged the complexity of this by her matter-of-fact presentation of what could have been, and what actually was. Using keen judgement and attention to detail, she has disturbed our emotional connection to our built heritage with great power and subtlety.