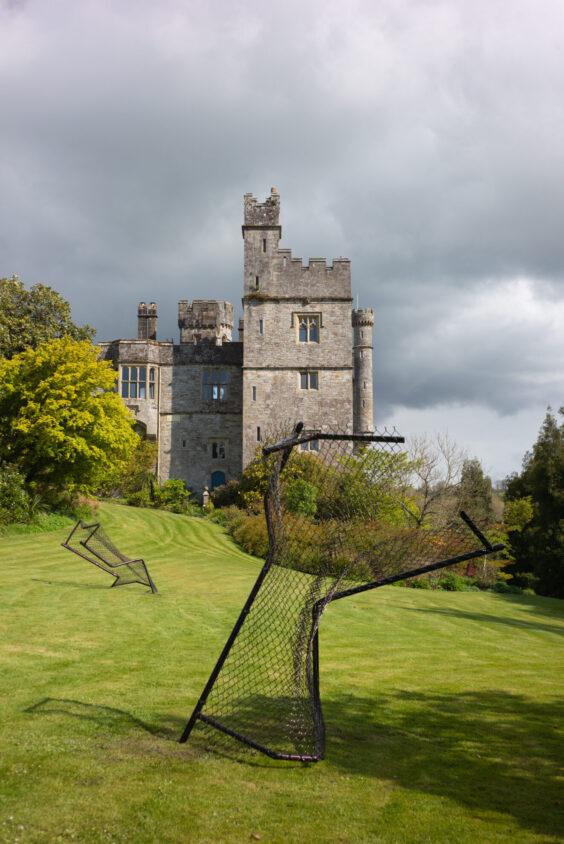 Lisa Le Feuvre is the executive director of the Holt/Smithson Foundation1. She has foregrounded Nancy Holt’s work in this exhibition, with her opening remarks stressing the importance of thinking and of asking questions through the experience of art.

Holt’s Electrical System (1982) is a site-responsive piece2. A network of more than 70 lightbulbs is connected via conduit pipework to the electrical system of Lismore Castle. It is designed to externalise hidden networks that connect the architecture to the landscape. We may wander through this maze of lightbulbs.

Are the matrix of pipes and wires comparable to the roots and branches in the gardens? Could these systems fail?

There are ‘thought prompts’; inscriptions carved by micro waterjet in sterling silver, displayed at intervals throughout the gallery. These are works by Katie Paterson in response to Holt’s conceptualisations and they whisper to you as you drift.

“Objects soaked in moonlight for over one million years” (2016)

Light and language were entangled concepts for Holt. She expressed her most pressing concerns in her concrete poetry3; Sun, moon, water, sky, earth, star – the cosmos contained by the frames and reflections of the human eye, by a pool of water, or by the lens. American artist, Matthew Day Jackson’s work, Commissioned Family Photo (2013), comprises 82 photographs of the artist and his family taken by a military camera, designed to record the extreme light waves and shock reverberations of nuclear detonations. This is chilling work; more evocative for being placed in the intimate setting of the upper gallery, surrounded by Holt’s concrete poetry and other writings.

And spins out again, seen.”

What will the world be like when the sun dies – or with a different solar pattern – like on Mars?

The film is projected onto an angled screen – the film grain is thus amplified. The colour looks washed out – jaded, from another time. There are flares and bokeh, refraction and reflection, wildly ranging focus – ominous and unsettling.

Using her locators4 or ‘seeing devices’, Holt was always focusing and extending the limits of vision and perceptual significance. AK Burns does this with The Dispossessed. Located in the lower gardens, the function of the barriers is dissolved by glamourising and contorting them into shapes that invite their transgression.

In Boundary Conditions (2021), Irish artist Dennis McNulty creates a geolocated audio walk via The Echoes App. This evokes The Trails series, where Holt and associates experienced the landscape through sound words and image – an idea that is extended by McNulty’s use of geolocation5. The theme of an accelerating dystopia is continued in McNulty’s Maybe everything dies… (2013), where the lyrics from the Bruce Springsteen song, Atlantic City, are spelt out in haunting, digital time, on a minimalist structure – an apotropaic eye?

Does ‘the digital’ frame the limits of our being?

Interested in the sculptural relationship to experience, Charlotte Moth has created Blue reflecting the greens (2021) – a 90 cm blue mirror disc, mounted against a wall in the castle grounds, designed to reflect sunlight and foliage of the gardens in a blue-green cast.

Is the reflection (this reality) real, or is it an illusion?

Jennifer Redmond is an artist, writer and editor at mink.run and at The Unbound, an online platform for moving image and hybrid writing collaborations

1The Holt/Smithson Foundation was set up in 2014 to develop the distinctive creative legacies of Nancy Holt and Robert Smithson. It will end in 2038. Holt and Smithson recalibrated the limits of art, changing what art can be and where art can be found. Their art, writings, and ideas were the fertile foundation from which contemporary art has grown.

2The term ‘non-site’ was used by Land Artists to signify work that was situated within an exhibition space. A work was ‘site’ if situated on the land.

4Two of these ‘locators’ are in this exhibition; one in the riding house and one in Carthage Hall. They are made from steel pipes, drawing medium and black paint, in variable dimensions, according to the site.

5This work will be available globally from 3-6 September 2021 on lismorecastlearts.ie