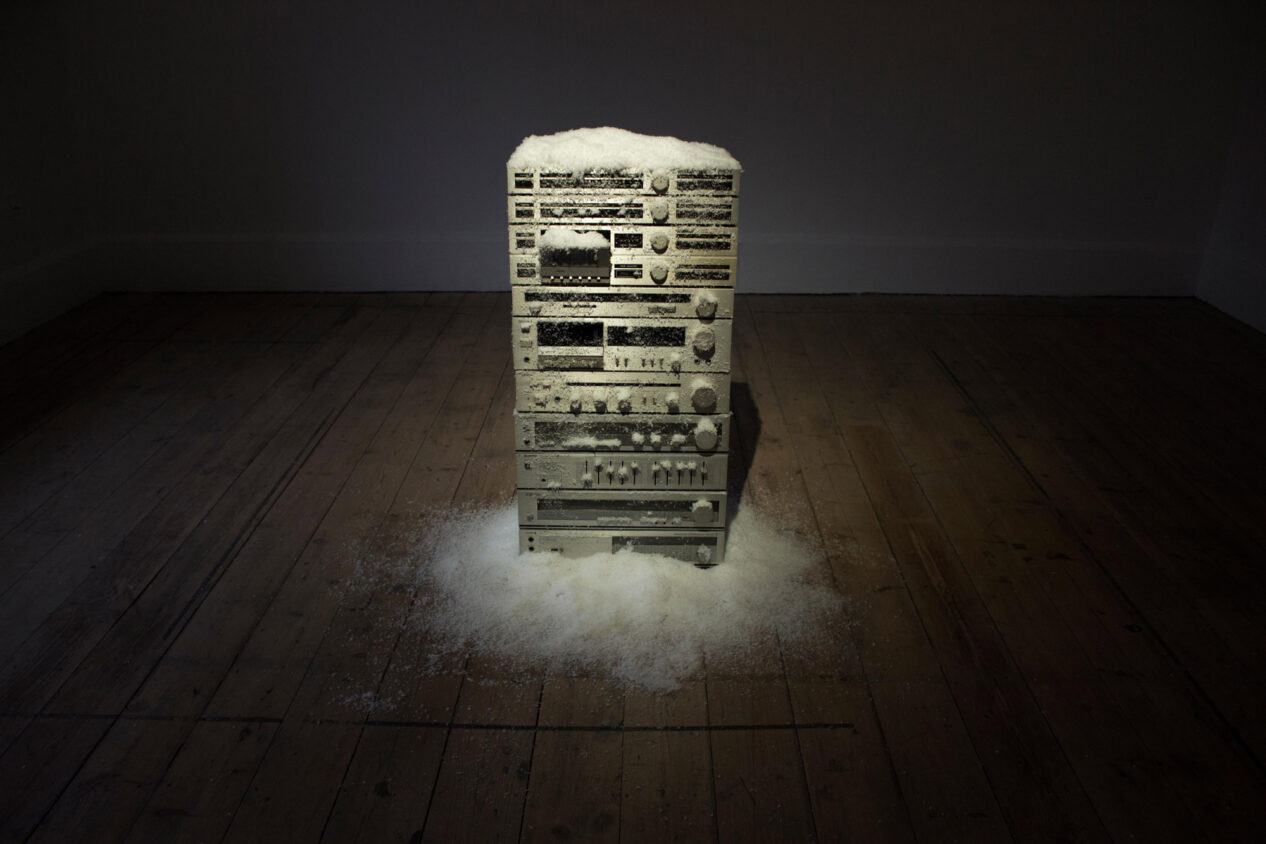 “Shite-talk”, a woman remarked, as she passed me and a group of art students discussing Maria Loboda’s enigmatic exhibition. Loboda has a fondness for ‘verbal sculptures’ and might have appreciated the hewn simplicity of the woman’s curt assessment.2 We were standing around a stack of silver audio components covered in fake snow. Perhaps it’s a miniature tower block, a student suggested, its inhabitants sealed in ice. It’s as though the sound has been dampened, someone else said; snow-covered things are quiet and soft. Consisting of several cassette decks and amplifiers, the waist-high tower also included a graphic equaliser – an outmoded component from the recent past. Called The Omniabsense (2019), the piece was strikingly reminiscent of Rodney Graham’s Rheinmetall/Victoria 8 (2003). Also focused on outmoded technologies, Graham’s work stages a stand-off between a 35mm film projector and the images it projects of a snow-covered typewriter. We wanted our own stand-off, but the curt critic wasn’t hanging around.

Suggesting the slatted light and shade of film noir interiors, a wall of grey and white horizontal stripes leads you into the main exhibition area. Once inside, the evocation of film continues with a series of obliquely connected objects and texts, giving the impression of an extended mise-en-scéne. Huge and exotic looking bugs crawl across many of these set pieces (not literally crawling – the bugs were either fake or dead, I wasn’t sure) instilling an entropic, mildly nauseating air. Perhaps the bugs are being curious on our behalf, I thought, feeling their way into the cryptic zones our minds find it difficult to enter.

In dOCUMENTA (13), Loboda moved twenty potted cypress trees through a parkland under the cover of darkness. In last year’s Venice Biennale, she draped lumps of wet clay in shirts and sheets of plastic. Her work tends to remain protean and shifting, changing with each presentation and context, the viewer a protagonist in a game of hide and seek. A group of framed, photographic prints is titled, Sleeping with Gods (2019). Under the cover of blankets, a figure (we see only the hands) holds a book open on an image of a clay pot. Different in each image, the ceramic centrefolds are illuminated by torchlight, lending a surreptitious, slightly forbidden air to the perusal of otherwise innocent looking containers. The idea of containment carries into the central exhibition space, where a black and white painting, The Business Vase (2019), extends across several walls. The painting describes the outline of a curvaceous vase, draped with a man’s tie at various stages of unravelling. The unravelling seemed to figure a transformation of some kind – but of what, and into what, remained stubbornly opaque.

Less opaque, but remaining somewhat impenetrable, A Man Takes Down a Painting while Standing on the Sofa (2019) is a stained glass panel, depicting the action described in the title; a scene bathed in the same striated light found at the exhibition entrance. This large panel covers a window overlooking the gallery café below. From the vantage of the café, the stained glass panel appears like a magic window, at once obscuring what’s inside and inviting you in. The image is fashioned from a moment in Paul Schrader’s American Gigolo (1980). Loboda cites Schrader’s film, and particularly John Bailey’s distinctive cinematography, as an important influence. Bailey’s photography tends to draw attention to its own facture, his knowing, theatrical artificiality chiming with much of Loboda’s work here.2

The Model’s largest room is left mostly empty and in semi-darkness. A handful of alabaster wall lights, The Chosen (2019) – crawling with the aforementioned bugs – offer a glimmer of illumination. An enormous, stylised painting, Grand Interiors (2018) partially blocks access to the room. Such grand gestures are accompanied by little ones – a discreetly positioned cocktail, Note the Old Fashioned in the Rafters (2019) – adding up to a show that teases while keeping you at a distance. A vinyl wall text, Untitled (2019) cites a passage from a Raymond Chandler novel, “… We make the finest packages in the world, Mr. Marlowe. The stuff inside is mostly junk.” It’s a blunt note to end on. But you get the feeling that Loboda’s work doesn’t really end. It continues to be unwrapped, again and again, prompting speculations and intrigues, devoid of definitive answers.

Notes
1 From an interview with the artist by Karolina Majewska-Güde. artmargins.com
2 See especially Bailey’s work on Schrader’s Mishima: A Life in Four Chapters (1985)