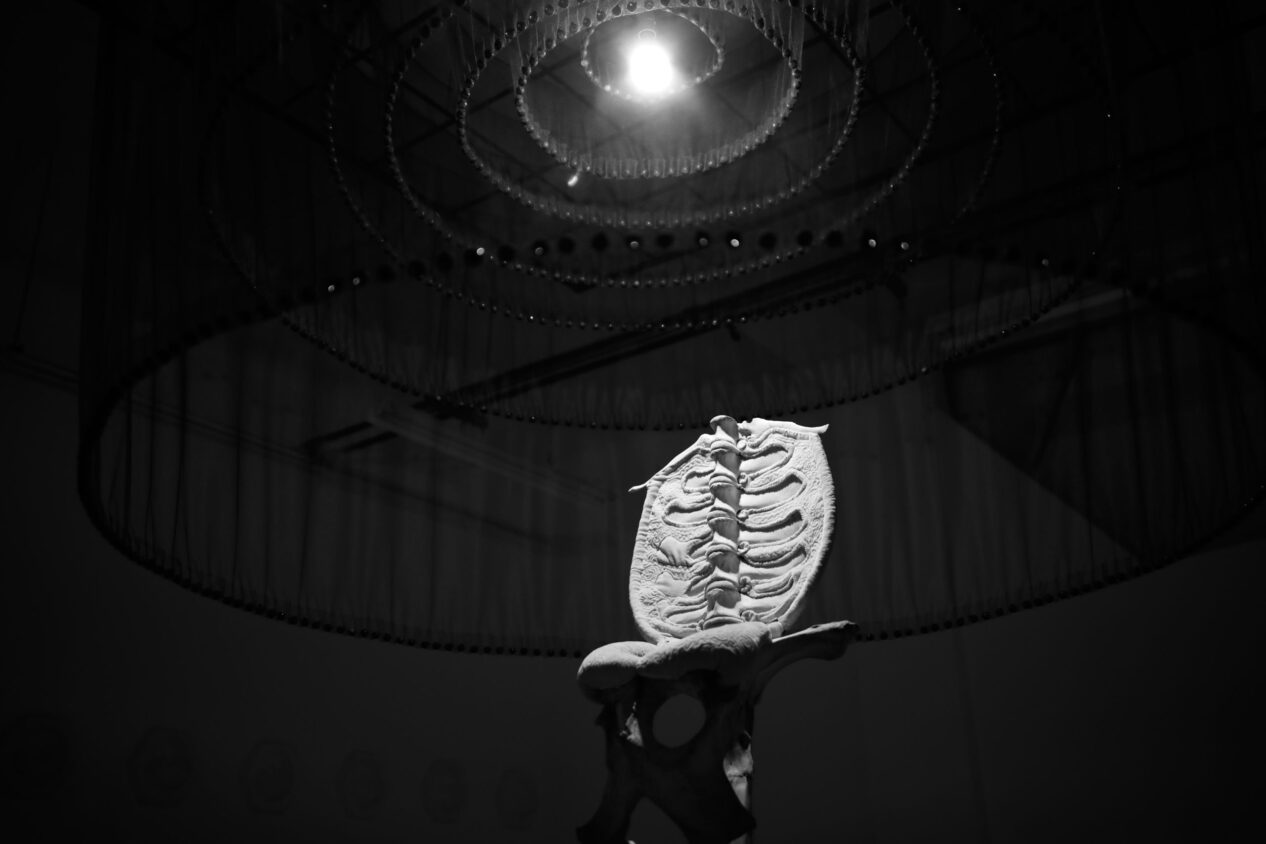 ‘Dearest, Someone Was Asking for You’ is an exhibition by Sarah Lewtas in Gallery 2 and the Atrium Space of Regional Cultural Centre, Letterkenny. The work is conversational and reflective; there is dialogue between artworks themselves and within the trajectory of the artist’s practice – new work references older work and materials from 20 to 30 years ago. This creates an atmosphere of continuity and coherence, while simultaneously making individual artworks difficult to fully reconcile as standalone entities. Everything is intertwined and related; the work is multi-layered in terms of materiality, production and referents. Lewtas often addresses another person (mostly unnamed) in her pieces. In this case, there is a favoured addressee, endearingly referred to as ‘dearest’, with no further information supplied.

The exhibtion was conceived as a site-specific response to Gallery 2. The viewer enters the gallery at an elevated level, accessesing the space below via a ramp. Lewtas saw this as a “sympathetic atmosphere for the components of the installation”.1 These sculptural elements are intended to communicate an abyss or transitory space. Lewtas’s title for this main installation is ‘Dearest’ and she includes a lengthy subtitle to reflect her primary thoughts on the space: “Abyss, Labyrinth, Mystery, Myth, Revelation, Lost, Found, Time space continuum, Key, Open, Close, Echo, Yoni, Tea cup, Taj Mahal, stuff like that…” She also references ‘Yoni’ from Sanskrit, meaning ‘abode’, ‘source’ or ‘womb’ – the feminine generative power. This subtitle also includes a dialogic between opposites, such as lost/found and open/close. ‘Abyss’ is important, in referencing a deep immeasurable space or cavity, and also linking with the sea. The gallery is an otherwise confined space, yet the artist sees it as much more. The installation consists of a centrally-placed assemblage, a handmade seat created from horse bones (these were found 25 years ago by the artist’s daughter on Magheraroarty Beach), upholstered with velvet and placed on a black pinth.

The ‘abyss’ could be that of the black net canopy, placed above the central sculptural element. There are six concentric circles of black netting and each varies in length. Their edges are weighted with small pebbles sewn into the netting that give the impression of sea forms, particularly jellyfish, further emphasised by the transparency of the netting. The jellyfish could act as a cogent metaphorical counterpart for Lewtas here, as the species can detect stimuli and transmit impulses throughout the nerve net and around a circular nerve ring. Many jellyfish have ocelli – light sensitive organs to detect light and dark. The artist’s placement of the seat, spot-lit on a plinth below the net circles, is interesting; there is an inherent dialogue created between the nets and the plinth object. The activation of the netting in terms of its nerves and light sensitivity strengthens the relationship between these sculptural elements.

On the walls there are a series of plaster reliefs. These feature the face of St Gobnait, the patron saint of bees, each within a hexagonal shape, referencing the cells of a beehive. On one wall there is a linear sequence of reliefs and opposite there is a configuartion of nineteen reliefs, arranged to reflect the structure of a hive. There is a final solitary relief visible on the wall as the viewer enters the space. There is a general ambience of light and dark in this gallery. The installation has a reflective, almost spirtual dimension; the abyss referred to by the artist might be the space of the imagination, entered when viewing this sculptural construct.

The final element is a series of eight drawings that the artist has entitled ‘Epigynes’, featuring the external genital structure of a female spider. These were previously exhibited in 2002 at Context Gallery (now called CCA) in Derry, and are part of Lewtas’s inspiration for her ‘Dearest’ installation. She observes: “I relate to them in different ways, as with many things their strange symmetry gives them a meditative mandala like quality which is what first appealed to me”.2 Lewtas is an artist who works slowly. Her sculptural installations are often products of an extended period of time, consideration and reflection. This sustained engagement and self-investment by the artist combine to create engaging and thought-provoking scultural realms.

Marianne O’Kane Boal is a writer and curator. She is expert advisor on art for the Ministerial Advisory Group for Architecture and the Built Environment.