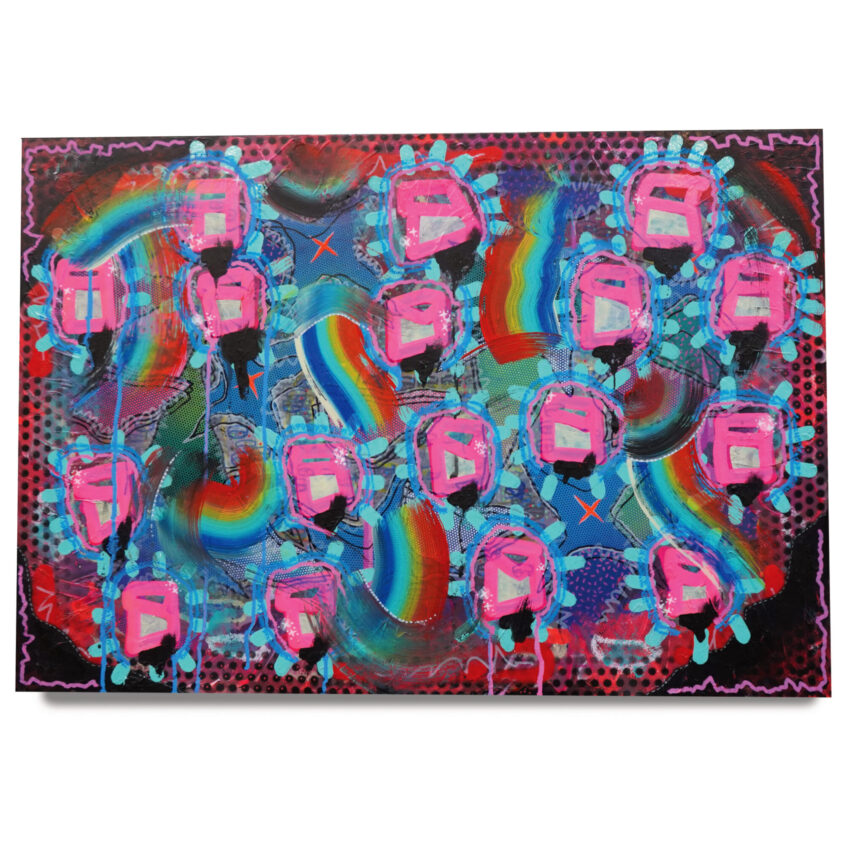 I have to admit, I approached Kurb Junki’s online exhibition, ‘Meditative Monitor’, with some trepidation. To an outsider, graffiti writing tropes and its fissured aesthetic, born originally from an era of neglect and economic decline in New York in the 1970s and 80s, has persisted into the twenty-first century relatively unchanged. It’s difficult not to view street art now and the grimy subcultures that attend it – graffiti and skateboarding – as suffering from an unavoidable and incidental trendiness, sprung from angsty, disenfranchised teenage boys. The foreshadowing of monolithic artists such as Banksy, who have pervasively marketised the very act that originally pushed against capitalism, doesn’t do much to help its cause. So, it was a relief to find that Kurb Junki’s online exhibition was somewhat of a departure from the frenzied wall tagging that defines the field.

The exhibition, launched in December 2020, comprises roughly twenty paintings, displayed on a single page of the artist’s website with a glitchy nostalgic video introducing the work, referencing the typical time a person spends in front of a painting (twenty seconds). There are instructions on how to view it: watch the video using headphones, scroll down to peruse the paintings, contact if you wish to purchase. The video itself speaks to a tired aesthetic; it is introduced by an attractive female bot on an out-of-date iMac monitor. The images of the paintings are interjected with footage of someone being arrested, while the bot simultaneously defines what freedom is. Towards the end, the video adapts to our shortened attention span in an increasingly digitised culture, flashing the paintings on the screen in quick succession. While not exactly innovative from an exhibiting or technological standpoint, Kurb Junki has moved his practice from the politics of public space to the introspective processes of a private studio, while simultaneously adapting to the current prohibitive conditions of showing work.

When the umbrella term ‘street art’ is mentioned in conversation with the Dublin-based artist, he expresses his want to separate himself and his practice from the term. Previously working on wall murals outside, he describes how the body of work exhibited in ‘Meditative Monitor’ moves away from the publicness and risk involved with painting illegally on the street. “When you’re working outside, you’re always looking over your shoulder, waiting for someone to move you along. There’s a performance to it as well.” Conversely, these paintings have been made alone over the past year in the artist’s studio, where he has explored some of the mark-making processes of New York School artists of the 1950s and 60s more reflectively. Employing the utensils of street art – spray paint, mops, silk screen – and pop culture references but taking an abstract approach, Kurb Junki contrasts the legacy of modernist abstraction with the postmodern appropriation of graphics and graffiti, not unlike contemporary painters such as Christopher Wool or Nigel Cooke.

Although uncomfortable with being called a street artist, Kurb Junki deals with the issues raised by the pursuit of the field – risk, control, surveillance, notions of inside and outside – with a tag and pseudonym to boot. The artist’s ‘tag’ is the epitome of mass consumption; the ever-recognisable hamburger is a recurring motif throughout the paintings, if not a core component. In Roots and Roots II, the separated layers of a tall burger appear in a number of stamps on the paintings. The same burger logo appears on his website and even though it isn’t a lettered name like the traditional graffiti tag (which is usually barely legible intricate letter work), it operates under the same function – a recognisable shape that identifies its author. The burger is further developed in paintings Burger Abstraction 49.1, 49.2 & 49.3, in which the individual elements are extracted, separated and reduced to colourful, chevron shapes and demarcated into a grid. The artist pushes this further, by isolating one small coin-like element of his burger and making it into a stamp, which he uses throughout most of the other paintings. In Fluorescent Ladder, they are divided evenly throughout the canvas by a red grid of spray paint. In Balance, a triptych, the artist places these stamped shapes closer together to make a circle and surrounds them with coloured block gesso paint. In Crowd Study, a much larger work, the stamps are emblematic of a crowd of people. Here is where the work enters the territory of similar artists of his generation, such as Lefty Out There, where the repetition of an abstracted and branded shape over a surface area takes prominence.

If not already deduced from the pseudonym, skateboarding culture informs the work; Kurb Junki is increasingly interested in making skate videos and embracing the community that surrounds it. The artist is also creative director of Goblin Magazine, a host to the multifaceted creative elements of skateboard culture. The repetitive nature of performing tricks is a form of mark-making in itself, the artist informs me, describing the physical effects left when waxing a ledge or rail, or leaving indentations and scrapes on a beveled wall. This influence is also evident in the gestural work of Tropical Mop and Pink with Prism, arguably the most layered and colourful of the works exhibited. The artist describes dedicated skate spots, such as Portobello, that have come to be an aesthetic playground for Dublin locals and where many of the area’s walls are also garlanded in murals. Linking the city with the body of work exhibited in ‘Meditative Monitor’, Kurb Junki pasted one hundred posters around Dublin with a QR code, leading those inclined to scan it to find the online exhibition.

It could be argued that the work exhibited in ‘Meditative Monitor’ is a pastiche of the New York School artists, such as Keith Haring, who sprung from a much seedier city than Dublin. But the exhibition is ultimately about the ‘meditative’ acts of painting – of wielding materials, gesture and overlay in more contemplative ways than allowed in public space. In this sense, the artist has turned a corner to a more fertile practice that is still in its infancy and will undoubtedly lead to more innervating work to come.

Gwen Burlington is a writer based between Wexford and London.