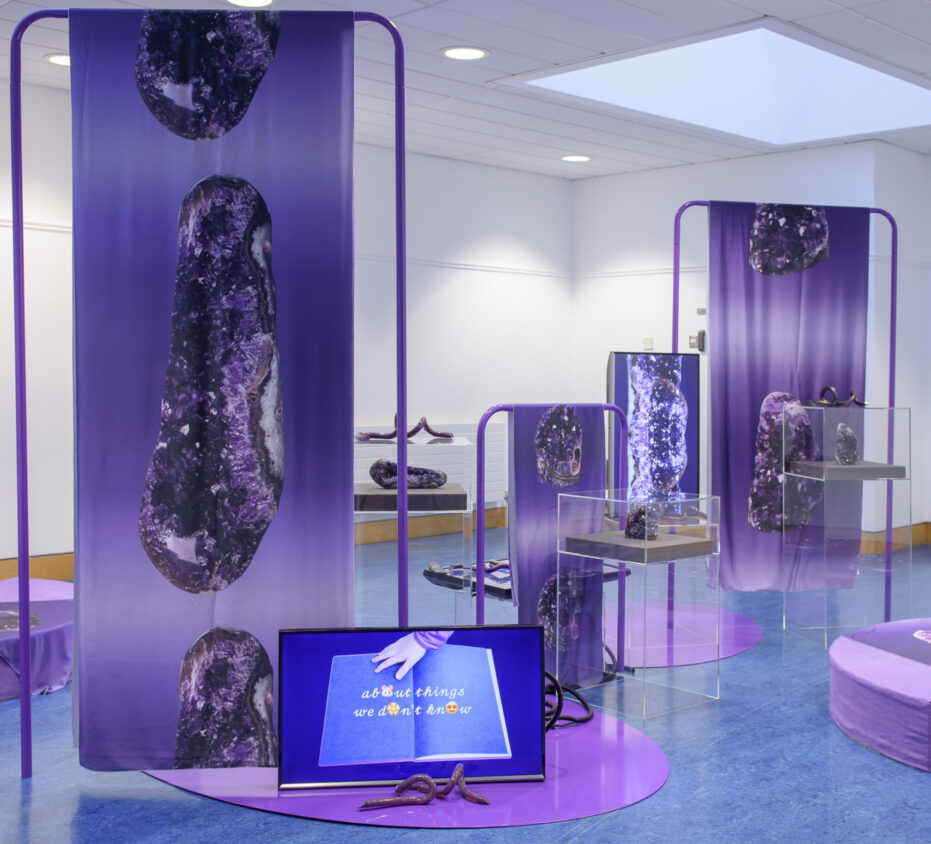 Two semi-circular, fabric-covered forms act as seating devices. These forms extend an invitation to the audience to sit around and with the work. It is an invitation to contemplate the work by ‘being-with’ rather than ‘looking-at’ the artwork, providing a platform for a slower form of contemplation that suggests habitation and hospitality. On three screens placed among these objects are a series of video works that act as an affective, sensory mediation tool as to how visitors might engage with the work. These video works encourage an attentiveness to the senses and how they can be engaged to experience and explore the objects in the space.

The Record Keepers is part of a series of works that I have been making that fall under the banner of ‘Tools for Wellbeing’, which considers the talismanic use of objects (particularly artworks) as tools for healing, pleasure and joy. ‘Tools for Wellbeing’ springs from my intrigue for the moments when the human body and other matter come into proximity for the purposes of non-medical, non-scientific healing. It holds the implication that encounters created in the context of sculptural art making have the potential to reveal a deep human faith in the power of objects, materials and the agency of things other than human.

In the production of The Record Keepers, and in my practice more broadly, I pose a number of questions that are central to generating the work. Can some sculptural artworks be a space where the truer material relationship between humans, matter and objects can be discovered through an allowance for multisensory encounters? Can artworks, and our experiences of them, be phrased as a unique engagement with materials and objects, unlike any other type of utilitarian, tool-use engagements with objects in the world? Can certain sculptural artworks be a space where invisible material exchanges, and vibrant encounters between the matter of the human body and other non-human entities, become sensate or reveal themselves to us? Are these encounters where we more fully acknowledge the agency of objects and materials? Or as curator Sheena Barrett remarks in the mediation text from The Record Keepers: “Can an exhibition make us feel better?”² The Record Keepers is an artwork that also happens to have been specifically commissioned for a young audience, aged between six and twelve years old. My methods for The Record Keepers were ultimately no different than those I would use for less defined publics, or the broader publics that I would ordinarily consider as the audience of my work. The same questions were at stake.

The Record Keepers engages encounters with the senses and particularly with joy, through the repeated motifs of crystalline objects, colour, form and surface, producing an exuberance or excess. Joy is posed in this work as an important and radical (though not exclusively) human experience, that involves all of our sensory and intellectual faculties. The Record Keepers proposes a joyful materialism that implicates human and non-human agency and engagement and suggests this artwork as a space for sensory exploration that includes language and sense of sight, but that also exceeds it. In fact, this exhibition was originally conceived to allow the primarily young audience to engage with a sense of touch, inviting gentle handling of the amethysts. This haptic engagement with the objects was intended as a way of re-navigating and reprioritising the sensory order for encountering the things around us – in other words, to circumvent a (perceived) reliance on sight as a primary mode for encounters with artworks.

In the publication, Matters of Care, María Puig de la Bellacasa carefully and critically describes what the implications of touch may be for imagining different forms of knowledge and more than human worlds:

“…much like care, touch is called upon not as dominant, but as a neglected mode of relating with compelling potential to restore a gap that keeps knowledge from embracing a fully embodied subjectivity. So how, then, is reclaiming touch opening to other ways of thinking if it is already somehow an alternative onto-epistemic path? …thinking from, with, and for marginalized existences as a potential for perceiving, fostering and working for other worlds possible.”³

De la Bellacasa describes here the potential of touch for new worlding by engaging new forms of embodied, inclusive intersectional, materialist, feminist knowledge. De la Bellacasa is not uncritical of the deployment of touch in this essay and fully considers the ethics of touch, noting the etymology of touch from the Italian toccare, meaning ‘to hit’. She notes that to touch “doesn’t automatically mean being in touch with oneself or the other.”4 Ultimately, touch, when deployed ‘care-fully’ is proposed by De la Bellacasa as being “reclaimed as a form of caring knowing.”5 This type of ‘caring-knowing’ resonates strongly with my sculptural studio practice and specifically with the work produced for this exhibition.

The Record Keepers was originally scheduled to open in mid-March 2020. Of course, the planned haptic, physical engagement with this work was halted by the onset of the pandemic. Suddenly, surfaces presented themselves to us as dangerous; touch meant contamination and exposure. What could this mean for this exhibition, and more broadly for my practice that is so grounded in material encounters, proximities to objects and to the collective experience of viewing and making art? Acting with care in the context of the pandemic meant the removal of touch. A year later, I have returned to thinking that after prolonged periods of screen-based virtual experiences, what may be desired and even essential, are the touches full of ‘careful knowing’ that material and physical encounters and proximities with artworks produce. The exhibition was installed in December 2020, when we had a brief window to place the work in Cabra Library. Soon after, the library closed again to the public, as another steep rise in COVID-19 cases occurred, and at the time of writing, it has not reopened. The exhibition remains untouched.

Despite this, the exhibition has been seen by over 500 children online, utilising video footage of the exhibition. Multi-sensory engagements have been created via considered haptic workshops delivered through Cabra Library, Dublin City Arts Office and Superprojects, and created by artists Olivia Normile and Claire Halpin. These workshops call on senses and emotions generated by the imagery and footage of the work. While this is a proxy for a much-desired real-life engagement with the work, the responses and drawings, care-fully mediated by Olivia and Claire and produced by the young participants, have been a revelation about what is possible in terms of haptic online pedagogies and how we can (re)engage our senses via simple mechanisms of drawing, painting, watercolour and artistic practices.

Barbara Knežević is an artist and educator living and working in Dublin.