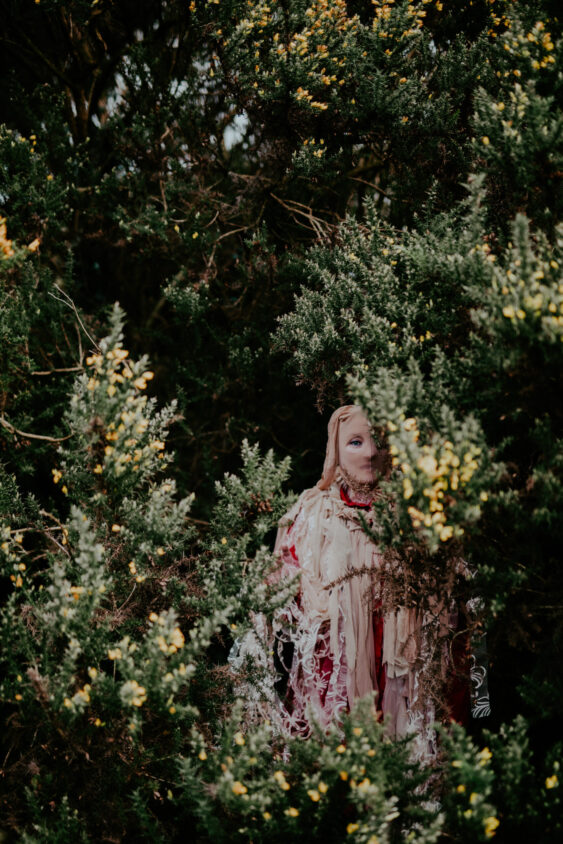 Amanda Coogan, still images from the series ‘They Come Then, The Birds’, 2021; Photograph by Ciara McMullan, courtesy the artist.

Rua Red’s ‘Magdalene Series’ are commissioned works by Amanda Coogan, Alice Maher, Rachel Fallon, Jesse Jones and Grace Dyas, curated by Rua Red director, Maolíosa Boyle, that will be exhibited between June 2021 and March 2022. These commissions revolve around the enigmatic figure of Mary Magdalene, the patron saint of women and sinners. Although initially planned as a group exhibition, over time this evolved into a series of solo exhibitions. It is supported by a public engagement programme featuring lectures and discussions with academics and feminist theologians including Meggan Watterson, Siobhán Garrigan and Marina Warner that unpack the complexities and ambiguities that surround Mary Magdalene.

The research and development of this large-scale project began in late 2018, but with the onset of the COVID-19 pandemic, the programme originally scheduled to run in 2020 was postponed. Adapting to new working conditions, the group of artists capitalised on the increased use of remote technologies. While previously meeting face to face several times throughout the year to discuss ideas, when they moved remotely, they were able to schedule weekly Zoom calls, in addition to regular communication through a WhatsApp group. Subsequently, this expanding aspect to their discussions enabled the artists to deepen the collaborative peer engagement amongst the group, allowing for a sustained and generative critique that facilitated the individual and collective development of the work into new and rich directions.

Amanda Coogan’s ‘They come then, the birds’, the first in this series of solo exhibitions, explores the iconic Mary Magdalene through the lens of ‘the Wrens of the Curragh’ – a group of women in the mid-nineteenth century, who lived on the fringes of society adjacent to the military encampment garrisoned in the Curragh, County Kildare. These were prostitutes and outcasts who ‘nested’ in the furze bushes on the Curragh. Living in impoverished conditions and exposed to the harsh elements, their presence was understood by observers as an ‘infestation’. Furthermore their overt sexuality required reform, while their unruly bodies were in need of regulation. However, their unique communal existence – where they shared food, labour and child rearing duties – proposes a type of kinship that extends beyond traditional familial roles. It is here that ‘They come then, the birds’ is situated, offering the potential for a radical revisioning of kin and community.

As the writer for Coogan’s performance and installation work, we agreed that I would be embedded in the project during its developmental stage, rather than writing about the work after its completion. This is an extension of the collaborative spirit of the overarching ‘Magdalene Series’. This is a new aspect to my scholarship on performance and it offers novel and stimulating insights into the unfolding process of live and recorded performance. Coogan’s research entwines strands related to the treatment of women and their expressions of sexuality in Irish society with the specific iconography of Mary Magdalene. This is then brought into proximity with the broader concerns of her practice, including embodiment, materiality and temporality.

The preliminary documents and a collection of sketches give insight into the development of the work, which has adapted to the challenges posed by the current circumstances. Watercolour sketches in muted hues, drips and pooled deposits of pigment gather on paper depicting key references and bodily gestures, reminiscent of Coogan’s own pared down performance gestures. Coogan’s first ‘on the body’ performance, where she brought the work from her Belfast studio into an exhibition space, occurred at the end of March. This initial two-hour performance was observed by an audience, both live (observing social distancing guidelines) and via live-stream. Testing out specific ideas allowed Coogan to feel how different actions and gestures settle into the overall composition of the work. Directly afterwards, Coogan debriefed on a Zoom call with her fellow ‘Magdalene Series’ artists, adding to the working-through of particular concepts.

The work is intriguing and nuanced as the performer seeks to embody ‘the Wrens’. One piercing blue eye stares out from behind a sensuously smooth stocking that obscures the face. Long tendrils of tulle-like fabric recall the long hair that Mary Magdalene grew to conceal her nakedness, yet in this performance it drapes over the body, revealing the flesh beneath. In her hand she grasps a golden egg while she photographs herself on a mobile phone. Afterwards she displays this image to the audience along with a series of messages she has texted during the work. Outstretched fingers repeatedly comb through tangling locks, seeking to tame them. A foil wrapped chocolate bar produced from a gold bag is placed for safe keeping down her bra, with chocolate melting against bare skin. Lying on the floor she slowly rolls backwards, her body folding back on itself in a deliberately controlled motion, flesh pressing against flesh. Is this monstrous shape shifting figure a penitent, a temptress or perhaps even a crouching defiant Sheela-na-gig? Hunched down behind evergreen boughs of verdant green and riotous yellow furze, she tentatively parts the branches to make a small opening. Reaching deeper, sharp spines press themselves into delicate exposed skin like a hundred little pinpricks. The figure reaches out, slowly extending her hand but that desired human contact is thwarted.

More than one year into a deadly pandemic, the very real issues of societal connections, togetherness and community have been brought into sharp relief. We find ourselves hyper-vigilant about the proximity of our bodies to others, particularly as we strive to keep apart and to cover up to save lives. Coogan’s work holds space for us to consider how we value bodies while contemplating kinship and community in the present moment. More broadly, the ‘Magdalene Series’ excavates the significance of Mary Magdalene, with reference to the particular meaning ascribed to her in an Irish context, offering scope for navigating the complexities of the ongoing political, religious and cultural legacies that we as a society continue to reckon with.