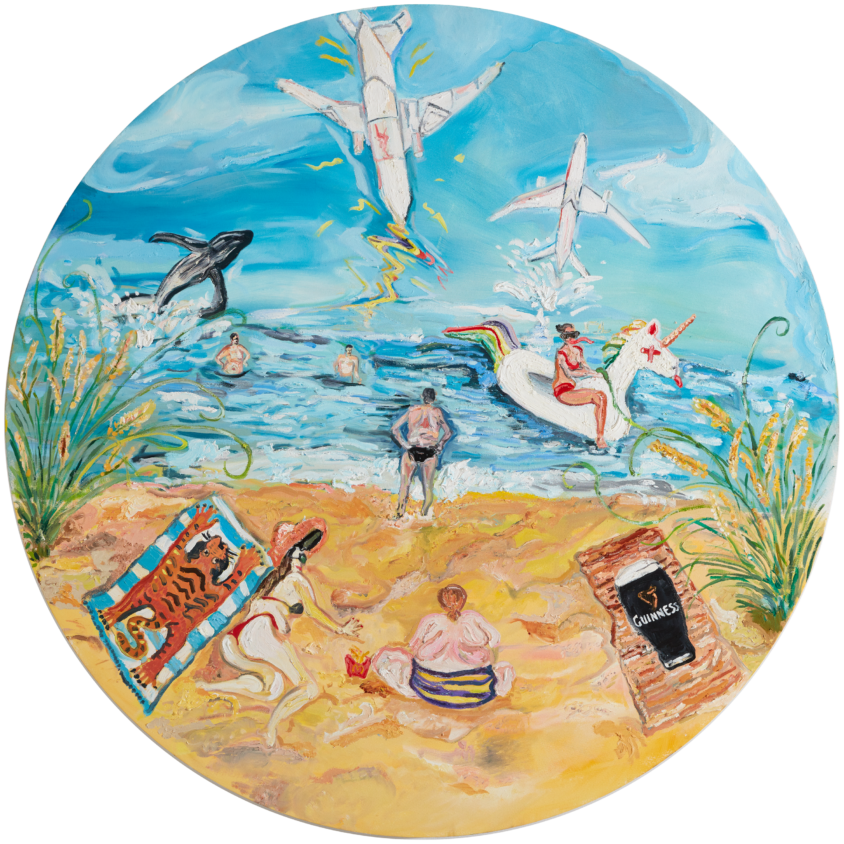 The British Labour Leader Keir Starmer’s recent admission that the traditional left had lost touch by failing to listen and engage with the societal grassroots that they claim to represent, their inability to parse and solve the discontents that led to Brexit and the subsequent vacuum that the conservative right have shamelessly and ruthlessly exploited for political gain, feeding on bias and unsubstantiated narratives and fuelled by editorially free digital spaces, has been well documented in the UK and elsewhere. This space between unheard inchoate articulations of coping class needs and the absence of shame as a regulating and moderating force within the political class came to mind as the context for considering the practice of UK-based Irish painter Sheila Rennick and her recent solo exhibition, ‘Screaming on Mute’ at the Kevin Kavanagh Gallery.

Rennick’s paintings sit comfortably within a painting lineage that contextualises the macro socio-political in the micro machinations and absurdities of a specific social milieu that ranges from Hogarth’s A Rake’s Progress to Weimar Expressionism and more recently to painters such as Genieve Figgis’s grizzled aristocracy. Although, unlike Figgis, as Rennick goes native in the post-Brexit jungle, her characters are more likely to be clad in trainers than tiaras. In tone, Rennick’s worldview resists punching down; however, they are not overly infused with empathy, sentiment or compassion either. Rennick’s gaze comes closer to a deadpan bemusement at where we find ourselves.

Many painters have experienced the challenge of negotiating a field that has the weight of a long historical tail, so while there are some classical allusions in her use of tondo supports and Rubenesque figures, in their material construction Rennick’s paintings do not seem overly hidebound by traditional formal constraints around colour, drawing accuracy or composition. There are no rules to be learned and then broken here, perhaps because they never existed to begin with. The paint application builds layers from brisk thin under painting to thick fresh impasto. As a colourist, her palette tends toward pastel powder blues, tinted oranges and unmodulated pinks that are iced on as the painting progresses, like an ABBA song in which the melodic sugar rush can sweeten the lyrical toothache that lurks below the surface. These instinctual and unfiltered production values feel entirely integrated with the meaning and tone of the narratives.

Where Hogarth’s eighteenth-century narratives are characterised by their moral and redemptive tone, the protagonists in Rennick’s soap operatic dramas are defiantly twenty-first century in their boundless non-judgemental world and there are no obvious moral arcs or heroic journeying. The connective tissue for the actors in this theatre of the absurd is the digital age of blended work arrangements, Tinder hook ups and Instagram self-regard. In Working from Home (2020), the proverbial ‘pram in the hallway’ is crawling on the floor of a kitchen-cum-dining space, where pandemic work practice and domesticity merge into an overwhelming cocktail, fuelled by wine and fast-food takeaways. In Zero Perks (2020), a sterile open plan office, two male employees engage in horseplay as they gesture toward an isolated female with overtones of a toxic male dominated work culture. In Summer 2020 (2020), a plane plummets into the sea, witnessed by beach goers astride an inflatable unicorn and beside Guinness towels, only to emerge comedically on the other side of the composition.

Placed in and amongst these psychodramas are a menagerie of animals both domestic and exotic – foxes, flamingos, monkeys, dogs, whales and ponies – all of whom bear witness dispassionately to the foibles and absurdities at play and are conceivably wiser and more knowing than their human counterparts. Emojis abound as a preferred option of emotional shorthand. Taken at face value, this could sound like grim kitchen-sink realism but the paintings are delivered with a buoyant sense of fun and humour. Each painting has a clear narrative proposition yet leaves enough lateral space for viewers to draw their own conclusions.

Perhaps these characters are ciphers for a western capitalist society that theoretically is structured to satisfy all human desire. What happens when nothing is denied or inaccessible? The characters in Rennick’s paintings seemingly populate a world of capitalist abundance consisting of sun holidays, instant digital gratification and flexible supported work culture. Yet there persists a pervasive sense of vacuity and lack of nourishment that, like Starmer’s ignored and unheard classes, are worth unmuting for.

Colin Martin is an artist and Head of the RHA School.