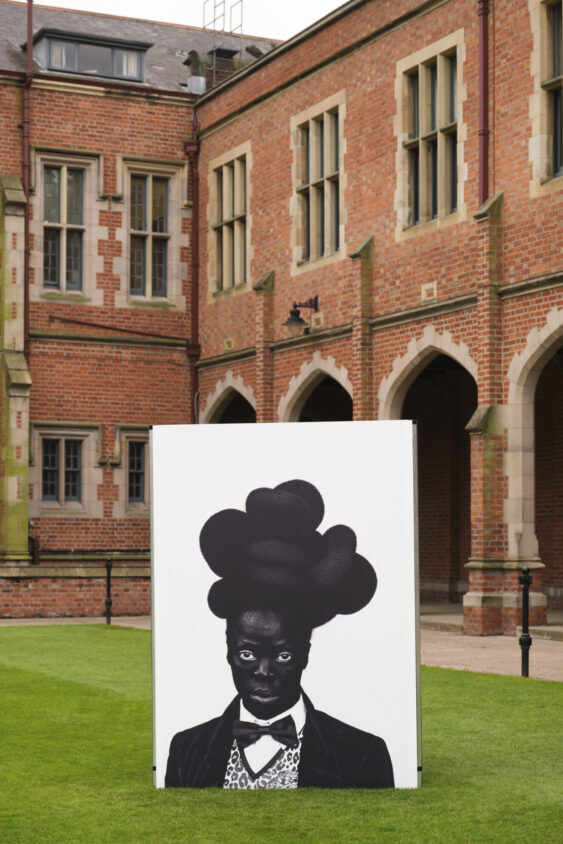 The Naughton Gallery, located in Queen’s University Belfast, hosts two exhibitions which both incorporate considerations of African history and culture, coming from differing perspectives, but sharing a number of visual and ideological characteristics. The first, ‘Sorry, Neither’ (25 May – 11 July), is a group show in the gallery of mostly Afrofuturist work and the second, which is shown in partnership with the Belfast Photo Festival, is a remarkable selection of self-portraits by South African visual activist and photographer, Zanele Muholi (3 June – 1 August). These are printed large scale and shown in the university grounds.

The multi-layered art and activism movement Afrofuturism has developed over a number of years, with the jazz of Sun Ra, the funk of George Clinton and the science fiction novels of Octavia Butler its forerunners. In visual terms it has developed a recognisable, but fluid, aesthetic and the lineage of many of the recent works included in ‘Sorry, Neither’ can be traced back particularly to Sun Ra, whose costumes and stage sets evoke the future cosmos from which he claimed to have travelled, seen in the low-budget 1974 film, Space is the Place. Afrofuturist film has developed considerably from this rather rudimentary beginning to, for example, the beautiful and moving ecological sacrifice in a futuristic East Africa in the short from 2009, Pumzi, written and directed by Wanuri Kahiu. The aesthetic reached a wide audience in Ryan Coogler’s 2018 Marvel blockbuster, Black Panther.

Afrofuturism is an art of resistance, grounded in objective analysis and imaginative rethinking of history. It blurs the distinctions between past, present and future to create new realities which can highlight the nature of injustice and oppression or present alternatives which negate them. This marks a distinction from (other) forms of resistance, which assert the primacy of material reality over ideas – ever since Marx stated that it is not consciousness that determines being, but social being that determines consciousness.

The two sides of this ideological contradiction can, perhaps, be reconciled through the formation of a strategy that looks to W.E.B. Du Bois’s notion of double consciousness, whereby African Americans recognise that their identities can be formulated through the juggling of their Africanness and their Americanness. As an extension of this, the material and the ideal, the traditional and the modern, the actual and the potential, can impact on each other to create a dialectical basis for understanding historical realities and potential futures. This can in turn form the basis of fictional discourse, existing across all artistic forms (exploring the historical truths of slavery, lynch mobs, Jim Crow and now the growth of the Black Lives Matter movement in the face of the state murder of George Floyd), while simultaneously creating new futuristic, posthuman diageses in which the African diaspora has autonomously forged its realities.

The work shown in ‘Sorry, Neither’ is almost exclusively based on the human figure. Many are located in future or extra-terrestrial environments and at times display signs of evolved or mutated physical characteristics – in the works of Benji Reid and Charlot Kristensen, for example, humans have gained the ability to fly.

In Gianni Lee’s This Was Your Future but We Failed You (in which even the title travels through time), the heavily-made-up character stares out at us contemplatively, with a futuristic seafront cityscape behind them. Their hands are blue-green with red-painted nails, emerging from a white shirt which dissolves into brushmarks melting the sea. This same character appears in Change That Man’s Heart or Kill Him, now sporting decorative armour and a full red skirt, which again breaks down into gestural marks that blend into the visually chaotic background.

Rickii Ly utilises digital photomontage to create his other-worldly “humaliens”, with elongated necks and airs of indifference. In one piece (The Gift – Look, 2020), one of the strongest images in the show, a mother and daughter sit at a table laid out for a simple meal of fowl and fruit, its familiarity countered by the mysterious gold filigree spheres placed on the yellow tablecloth. The verticality of the green curtain background echoes the elongation of her neck.

Katia Herrera employs long-standing and familiar science fiction aesthetics in order to assert the strength and endurance of black women, exploring the universe with confidence and regality, wearing her gold insignia and disposing of adversaries with her laser eyes.

Bobby Rogers’s portraits of royalty from his photographic series, ‘The Blacker the Berry’, are at the same time beautiful and disarming. Their silver technology-enhanced eyes, gazing at us hypnotically to pull us through their fourth walls, are complemented by their costumes of elaborate fabrics and gold and bejewelled ornamentation, wiping out the criminal legacy of Cecil Rhodes and European colonial history.

This ubiquitous outward gaze is at its most piercing and disarming in Zanele Muholi’s show of self-portraits, ‘Somnyama Ngonyama’, which translates into English as “Hail, the Dark Lioness”. This is enhanced by Muholi’s exaggeration of the blackness of their skin, which places their eyes at the focal point of each image, even in the few in which they glance sideward. The artist is virtually daring us to confront both their face and its harsh, but stunningly beautiful, contextualisation. Like much of the work included in the Belfast Photo Festival, Muholi’s work is printed large and exhibited outside, which in this case somehow enhances the intimacy and unease of the audience experience.

Muholi has long been exploring complex intersections of LGBTQI+ issues (including their own non-binary identity), labour, politics, history and tradition. As they have said, “Photography for me is always first and foremost a tool of activism, driven by the idea of social change.” A European audience may struggle somewhat to comprehend fully the signification within the work, but Muholi themself has provided some clues. In the very limited space available to me, I can only touch on these complexities and I’d encourage visiting the show as often as possible.

A number of the pieces in the show, for example, refer to labour and to Muholi’s mother Bester specifically. In these, they are adorned with, for example, clothes pegs and scouring pads. The exploitation of black domestic labour has historically been a highly-visible sign of white supremacy in both apartheid South Africa and in the United States and Muholi shows that this is far from becoming a lost memory.

Employing a further long-standing racist characterisation, in the piece titled Phaphama (which I believe translates as “rise” or “waken”), Muholi wears the shirt, bow tie and (leopard-skin motif) waistcoat of the minstrel. Their expression is simultaneously one of sadness and accusation. This combination of direct emotional confrontation with the audience and politically charged imagery forces a Brechtian relationship, ensuring objective critique and self-evaluation. The manner in which the work is presented, large-scale and al fresco, enhances this contemplative process.

Colin Darke is a multi-media artist based in Belfast.