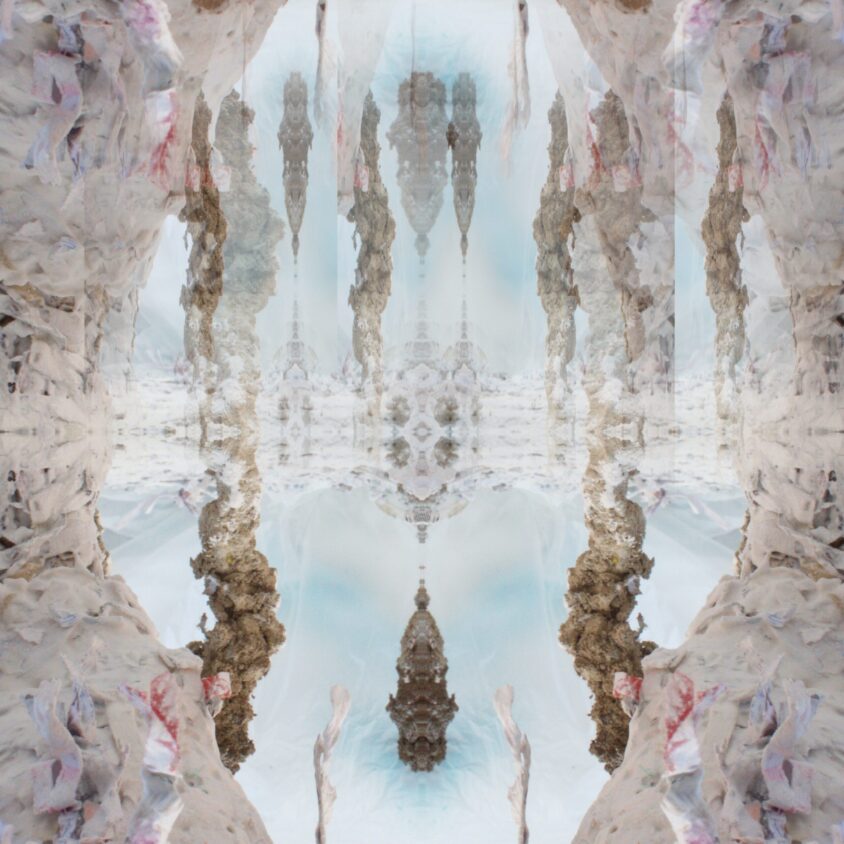 In the kind of tangential multiplicity that arises from viewing art online, seedling ideas can find immediate resolve in sporadic searches… Or concentration fragments and paths of enquiry lead down a rabbit hole, the initial quest forgotten, even as you encounter possible conclusions. I’m about to browse ‘Tales of the Future Past’ by Rory Tangney. The intro reads:

This project was created during the COVID-19 lockdown and was intended for online dissemination.

I look at the images, quickly shuffling to the end. I would do that in real life too – I would have a quick look through the whole exhibition, to get a sense of how much time to spend on each individual piece. I navigate back to the start and move through the images one by one using the arrow keys. A small paragraph of text beneath the image carousel reads as follows:

These somewhat surreal, fantastical scenes imagine a future civilization, but its nature is unclear. Has civilization broken down and have we reverted to primitive ways of being in the wake of climate change and biodiversity loss?

Images of forms, totems amidst a snowy landscape, introduce an imagined topography. I can’t tell how the images were created, whether they incorporate objects physically rendered and manipulated digitally, or whether they have been produced entirely through a digital program. Perhaps the former, as the totems have a sandy texture that looks quite realistic – I’m peering at the screen trying to work this out when I realise it doesn’t matter at all, because unlike viewing art in real life, I won’t be able to verify this through the act of staring intently at the object.

I open Google Maps and then scroll from where I am in Donegal, across the Atlantic to the West Indies. I open a tab on the Atlantic Ocean; the second largest of the oceans, it separates the ‘Old World’ from the ‘New World’ in the Eurocentric perception of the globe.

Then I return to ‘Tales of the Future Past’ and skip back into the middle of the carousel; here I encounter a peculiar, unpeopled landscape – maybe an island or archipelago. On the exhibition page, I read the short text again. Like a synopsis on the back cover of a Science Fiction novel it promises “fantastical scenes” that “imagine a future civilisation.”

I imagine these fantastical scenes taking place on an island – the perennial staple setting of Science Fiction narratives. Many utopias throughout history have been islands, including Thomas More’s Utopia, which first introduced the term. Islands are, by their nature, geographically separate from the mainland, cut off and isolated in ways that can slow the spread of plants, animals and various types of disease. They can be culturally separate too, in terms of ideas, trends, dialects and habits. Karen Lord’s short story, The Plague Doctors, published just before the onset of the pandemic, is set on an island and foretells much of what we have witnessed and endured over the last year. The forward by Pam Belluck, published in January 2020, reads:

…with bodies from the mainland washing up on an island where Dr Audra Lee is desperate to find an answer in time to save her pox-exposed six-year-old niece. It’s the kind of global pandemic that should prompt all-hands-on-deck cooperation, but Dr Lee finds herself working not only against a disease but against a veil of secrecy and selfishness erected by wealthy elites who want to prioritize a cure for themselves.

In trying to envision what the future should or might be, we consider the human condition and acknowledge the failures in society from which utopian projections have emerged. And Lord, a Barbadian writer, is inherently familiar, not only with the conditions of island societies, but with the impact of perpetual colonial exploitation and the inherited dispossession and trauma that persists as a direct result. For those who have borne the worst violence and oppression of the capitalist system, a dystopic scenario like a global pandemic was perhaps unsurprising and inevitable. Lord’s socially aware speculative fiction has evolved from a collective wisdom – an understanding that the perpetuation of such destructive and heinous colonial hierarchies would eventually go beyond the control of even its instigators.

At this stage, I Google the famous quote about it being easier to imagine the end of the world than the end of capitalism and then I return to Tangney’s ‘Tales of the Future Past’ exhibition tab to look at the images again. A line in the text asks: “…have we awakened and civilization advanced?” Just as islands can be described as a bit of earth that has broken faith with the terrestrial world, speculative fiction could be considered in the same vein, with the potential for visionary perspectives. These days, dreaming of other worlds through speculative fiction is proving not only pertinent, but crucial, as it can offer unique and invaluable opportunities for representing the colonial, postcolonial, and neocolonial conditions and thus proffering resolutions that need to be heard.

I click back into the exhibition one last time and navigate through the images. Tangney’s online exhibition is asking if old Science Fiction tropes have something new to offer. And somewhere on the eighteen tabs that are now open across my laptop screen, Karen Lord’s short story, exemplifies a re-organisation of society that might exist separately from the tried and tested methods of the mainland, giving rise to a particular form within speculative fiction and art that has the potential to inform the socio-political restructuring of civilisation.

Ingrid Lyons is a freelance writer and curator, currently living and working between London and Donegal.