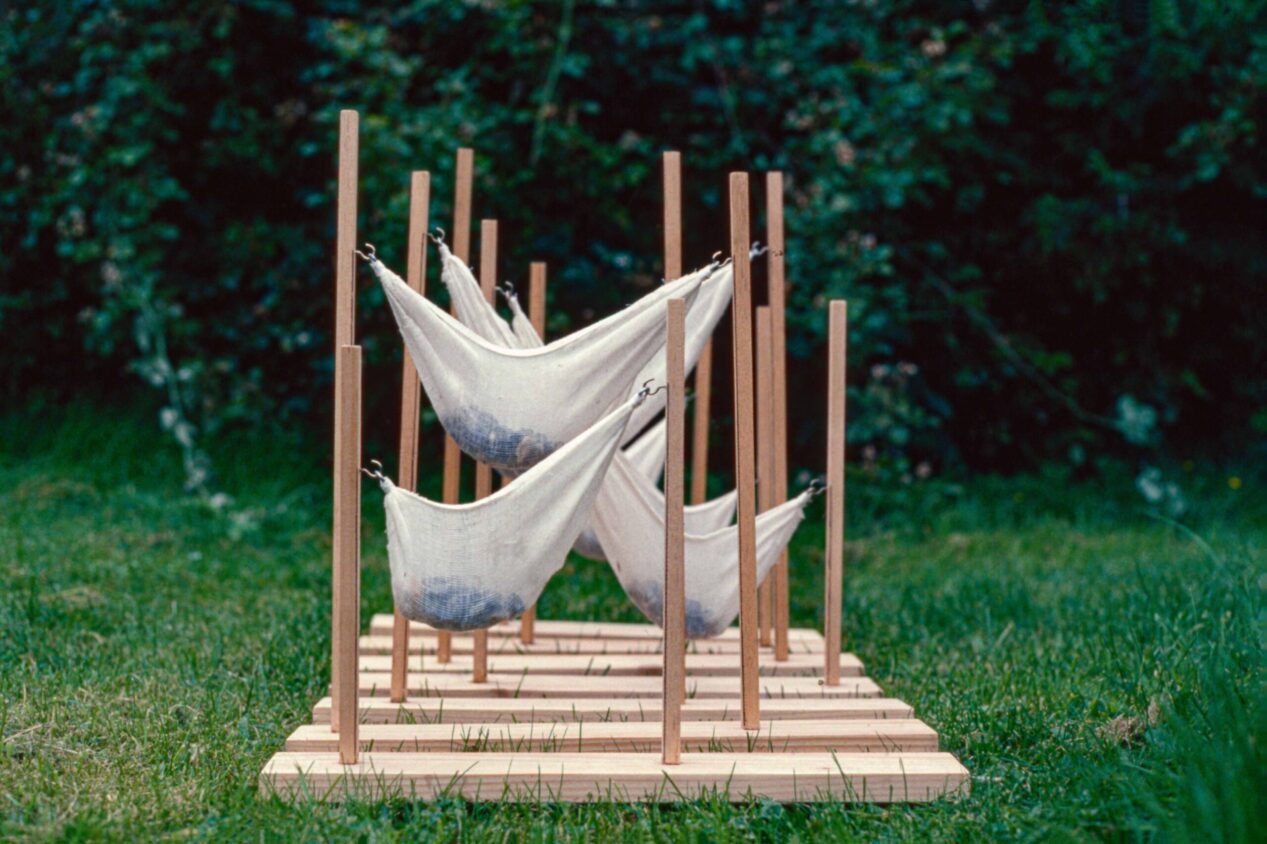 I first saw Aileen MacKeogh’s work in 1991 when her exhibition, ‘House’, came to Garter Lane Arts Centre in Waterford. Aileen’s work was unfamiliar, strange. It blew me away. Aileen herself, when she came to give a talk, had a big impact too. Friendly, open and kind, so different from the anxious artistes I had encountered thus far, she was a breath of fresh air.

Many years on, the bones of ‘House’ – the precariousness of the porcelain and steel pieces on elongated skinny-legged ‘chairs’ – echoing in my own practice, I Googled her. I did not find her. Instead, there was an obituary or two, an image of a work in the Arts Council collection and a small picture of her at some opening long ago. Aileen had, for newer generations of artists, all but disappeared.

Aileen was not a recluse or an introvert. She was active and engaged – part of a generation that gave us strong female artists like Dorothy Cross, Alice Maher and Kathy Prendergast. Her work, primarily sculptural, was ahead of its time, addressing environmental concerns, materiality and the nature of the art object.

Graduating from NCAD in 1976, she went on to study and lecture in America before returning to teach in NCAD. Continuing to exhibit here and abroad, her work was selected for numerous shows. As a director of Arthouse from 1994, she was a part of the energy that revamped Temple Bar, pushed for funding for new media, undeterred when she came under fire from more traditional quarters. She would go on to become the head of IADT from 1997 onward, which she transformed before her early death from breast cancer in 2005 at the age of 52. Ironically, even though she had created the first digital archive of Irish artists’ work at Arthouse, the new media she championed would let her down.

Those outside the artworld might argue that perhaps her work was not ‘good enough’ to last; however, the accolades and respect she received during her lifetime beg to differ. Others within the arts might question whether she did ‘disappear’ at all, remembering her as a fellow student, colleague, peer, teacher, activist and entrepreneur. Her influence during her lifetime was significant. Process and engagement are important parts of the artist’s practice, more important than biennales or coverage in magazines or the afterimage left when the artist departs.

Aileen’s practice, springing up between the cracks of modernism and pushing through crumbling traditions, confident and organic, provides an opportunity to re-examine the artist’s role at a time when even older artists are being sucked into the image-driven social media round. Younger artists may have a different understanding of art practice altogether.

Aileen’s work took on issues that challenged existing sensibilities – from the way we see and understand landscape, to how we deal with death and grief. Her activities provided alternative artistic social engagements to the box-ticking we have now. She recognised the need for digital images of her own work, but she was too busy doing other things. And then she got ill.

Her ‘disappearance’ highlights how easy it is for artworks to die with an artist. How many other artists of her generation – and previous ones – have been forgotten because their work does not come up in internet searches? Nowadays, when taking photos is simplicity itself, we might ask how much digital technology has changed the ways in which art is practiced. In the pre-digital era, recording finished work was a drawn-out, arduous process. Achieving this was a feat beyond many otherwise capable artists in Dublin – let alone in the provinces – while the successful navigation of this process was no guarantee of any recognition then or now. Even if the work is strong enough to speak across years, slides are not digital images.

It was by pure chance then that Sandra Kelly, Visual Arts & Outreach Manager at Garter Lane Arts Centre, finding that one, online image of Aileen’s A Break in the Clouds on the Arts Council’s website, selected it for a group show of work by female artists that she curated last year. When I shared Aileen’s history with her, we decided to contact Aileen’s husband, Tom Inglis, to let him know that Aileen was not forgotten and to invite a contribution. In the end, Aileen’s work, created deliberately to embrace the passing of time, was too delicate to exhibit, but Tom, having longed to re-establish Aileen’s work but realising the scale of the task, asked if we could help. He had a clear idea of what he wanted to do first – get her images digitised.

Aileen’s family has well over a hundred slides of her work, spanning two decades and of a surprisingly steady quality. But digitising images is not just about having the right scanner or software. The level of work that had to go into removing dust and marks and producing print-quality high-resolution images meant opting to pay a professional. This assessment, selection and digitisation process has taken a period of some months and involved numerous communications between Aileen’s family, ourselves and our chosen digitiser, Filmbank, by email, Zoom and post.

Once digitised, the images had to be titled and linked back to the physical slides. Some slides have handwritten titles in a hurried script, familiar to artists caught up in the application process. Some titles are typed and include date, measurements and contact details, all in a variety of formats. One or two carry question marks, issues left unresolved until later – a later which never came.

And it is not over. Next is the website, then an exhibition. And of course, the work itself – where is it now? For the artist, the old school ones at least, the image is often the end of the process. Here, the images are only the beginning.

The Aileen MacKeogh Project, an initiative of Aileen MacKeogh’s family, was created to gather information about her career, artworks and their whereabouts, with a view to creating a website, an exhibition and a catalogue of her work. Anyone who is in possession of Aileen’s work, or who worked or exhibited with her, is invited to contact us at: pm.aileenmackeogh@gmail.com

Clare Scott is an artist and writer based in the south east of Ireland. She works part-time as Visual Arts Technician at Garter Lane Arts Centre, Waterford.