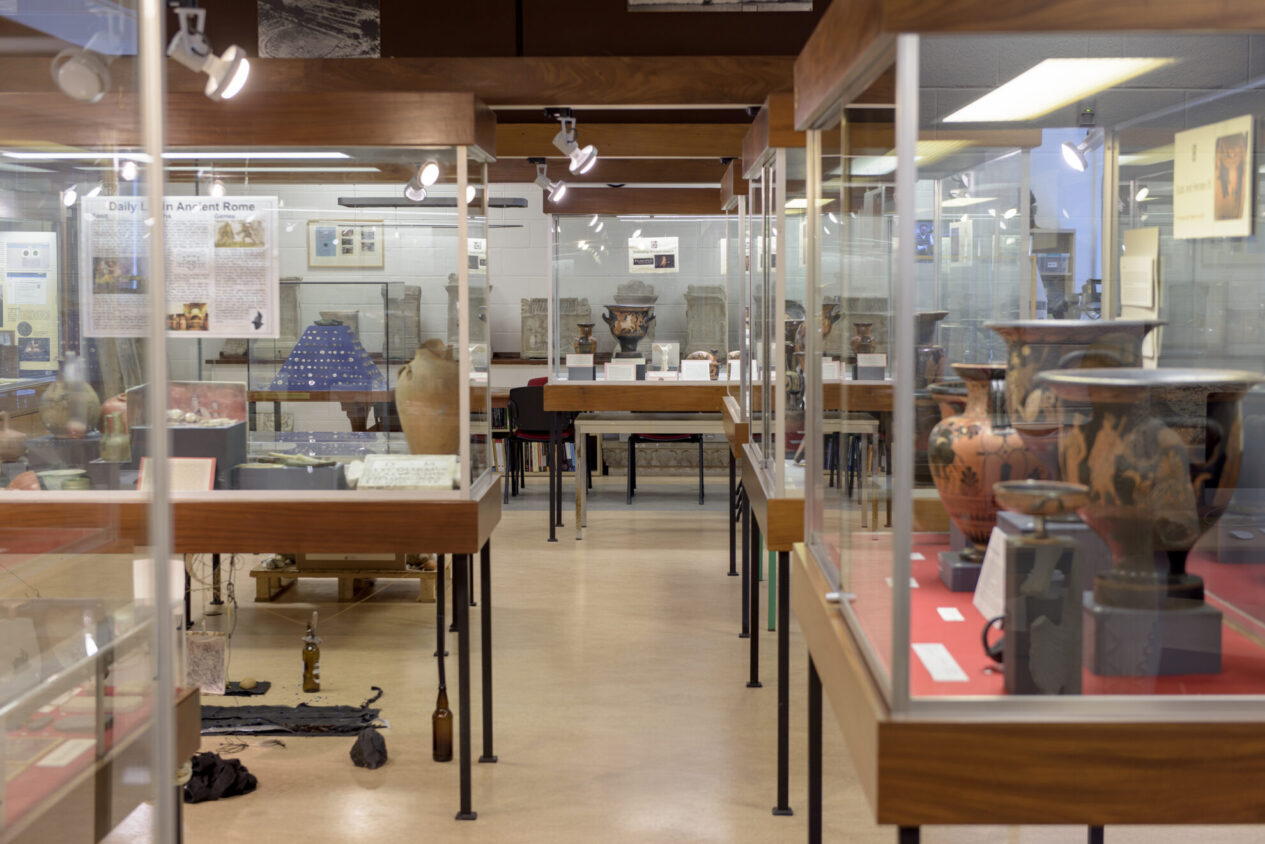 ‘The Museum of Ancient History’, curated by Pádraic E Moore and Dr Jo Day, is installed in the Classical Museum, room K216 in the John Henry Newman Building at University College Dublin (UCD). The exhibition’s title was originally imagined for the museum by its founder, Rev Henry Browne, who assembled the collection for his ‘teaching museum’ over roughly ten years from 1908.

For now, with all museums closed to the public under Level 5 government restrictions, the exhibition lives online. A Youtube video by Cian Brennan teases, imparting a spectral feeling. Its pulsing goth-trance theme, Maelstrom by Lasertom, sends the lens panning through the quaint room, as museum pieces and contemporary artworks loom in turn. While limited, the format conveys a weird thrill.

Since the waning of the classical world and its ‘rebirth’ in the Renaissance, knowledge of classical cultures has been the business of the privileged and educated. For many without this knowledge base, the classical heritage today is a mere language of anachronisms – tacky and suspect, always implying claims to power. The style of the church leans heavily into its pedigree: the colonnaded spaces make you feel watched; the shallow apses are crude diagrams of heaven. When Boris Johnson name-checks the politician Pericles or speaks in Ancient Greek, propaganda is received and, you would think, noted. In applying these contemporary art practices to the collection of the Classical Museum, ‘The Museum of Ancient History’ muses on popular, alternative receptions of the classical legacy.

In watercolours by Charlott Weise, minotaurs and hourglass-dancers are saturated – lustful, coercive and performative. Their Latin titles are ambivalent between sentiment and exchange of personal value: ‘beloved/costly’; ‘duty/gift’. Despite the fever of costume and sex organs, the seven little pages (measuring 30 by 21cm) have a conventional tenor deriving from their classical charade. It is argued that in the history of art, classicising compositional forms inculcated social structures.¹ As a contemporary comment on this, Weise’s work is exultant but sinister.

The Obedient City (2018) by Michelle Doyle probes for fragments revealing the political, economic and cultural rhetoric of Dublin. Its 18 plaster casts – the Dublin castles, the old Telecom Éireann sign – present like tokens of a strange belief system. They evoke an insidiousness of visible rhetoric, a distasteful preponderance in the public realm, normally suppressed from thought. While memorably droll, the humour feels like the sugar coating of alienation. There is a sense of having brushed against an unseen store of anger.

Night was dead, see-thru dark, 2020, is an installation by Richard Proffitt, nestled on the museum’s linoleum floor, worrying the lower part of a display unit. Folded black denim, beer bottles, ceramic, a photograph, lime segments, present a finicky, ridiculous arrangement of sham or inferior ritual practice. The modesty of these eclectic materials evokes pathos, and all seems guided by forces acting on an individual possessed. However, it is as if the spectacle has deviated from script, whether through distraction, fallibility or inclination, suggesting a tenacious autonomy in cultural self-definition.

Material objects contrast against today’s virtual, informational complexion. But this perspective overlooks the non-rich world and the crucial material fragility underwriting global consumption (does the idea of an object now unavoidably suggest our stressed planet?). Patrick Hough’s Object Interviews, 2013, feature a British Museum Keeper of Egyptian Artefacts, a cultural theorist and film prop makers, handling and speaking their expertise on real or facsimile ancient artefacts – which abide intrusive microphones like bored interviewees. They examine the draw of objects in general, as sites of informational and interpretive accretion. Their use value, if they have any, reflects and informs surrounding cultures. Their definition or transience may strain discourses.

In the foreword of the exhibition booklet, Moore cites the influence of Rudolf Otto’s theory of the ‘numinous’.² This is a category of religious feelings which indicate the reality of an unintelligible, ineffable god, who affects the religious mind with various exalted experiences obscurely indicative of His unconceived essence. The notion of meaningfully apprehending the unconceived, through affective response, is a tempting ennoblement of certain overwhelmed states (such as in encounters with ancient artefacts) when thought is suspended, inchoate.

An arrested uncertainty towards objects marks the work of Dorothy Cross. Her work can seem to unveil inhospitable chaos, with frequently hybrid, grafted members. In part perturbing, the splendid reality of these entities makes the experience feel transcendent and nourishing. The cast bronze pieces, Three Finches, 2008, are elongated, sleek, crowning a flat pyramid coin display. They are like shabti – the Egyptian funerary figures, which feature in a displayed photograph, taken by Cross in London’s Petrie Museum of Egyptian Archaeology – gesturing towards defining, human needs.

The politics of information affects Aleana Egan’s sifting screens, 2020. A suspended, rectangular steel-framed mesh hovers a few inches over an irregular quadrangle of thin, tubular steel. Like a fluorescent light unit, this is softly sombre. Underneath, a long, wooden table is hugged by neatly tucked, cloth-upholstered chairs – the kind one might find in a lecture room. Fibrous scraps of cellulose are strewn wantonly, like a destroyed copy book page.

‘The Museum of Ancient History’ is laden with momentous, multifaceted politics: identity politics; eurocentrism, colonialism and the affinity of the alt-right; wealth and education; histories of art. The treatments are mostly oblique. In this context, a striking aspect is the distinctness, involved idiosyncrasies and aesthetic concerns of the artists’ responses, as well as their physical separation within the ‘teaching museum’. The impression assembles a conflicting variety, which is both frightening and inspiring.