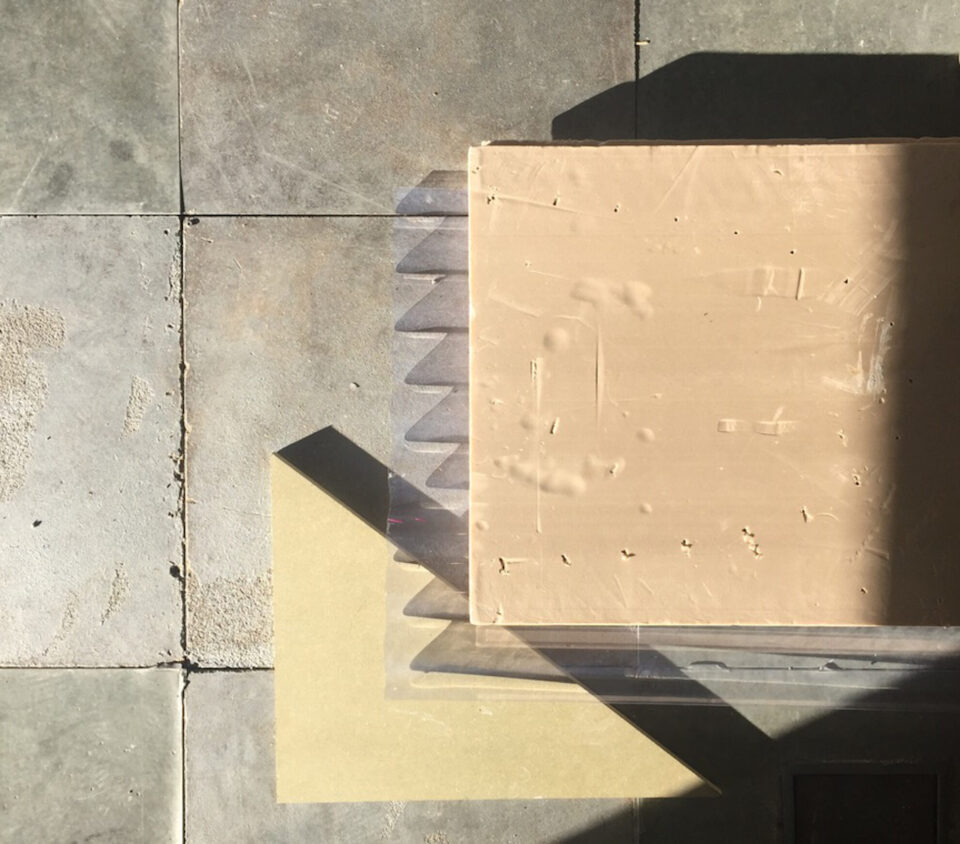 ‘Parallel [in]Between’ is an ongoing project of exchange and collaboration between visual artists Ellen Duffy and Kate Murphy. We were commissioned by The Dock as part of the Dock Summer Commissions 2020, which began at the outset of the pandemic as a way of supporting the artists who were scheduled to exhibit as part of the gallery’s 2020 programme. This facilitated a series of works, which took place over the course of a year.

We used this collaboration as a way to keep lines of communication open throughout the pandemic, as well as having a shared focus and accountability to continue working through uncertain times. It enables us to engage haptically with work other than our own, and to build upon the frameworks set by our own practice, allowing space for new ways of thinking about collaborative art making. We both share core values that impact how we make work, including the importance of materiality, site-responsiveness, and process-led practice. These key factors manifest in sculptural installations for both of us. However, it is at that point we start to diverge.

Ellen’s assembling process involves free-form decision-making that utilises found/discarded and industrial materials, incorporating them into fabricated structures that create interdependent assemblages. Kate implements a more rigorous set of rules, taken from industrial processes – such as cast making, woodwork and welding – to exercise the points between object and space. Kate considers looking, reflecting and spending time within the boundaries of a site an important aspect of how she fabricates her sculptural interventions in space.

The original intention for our project, ‘Parallel [in]Between’, began as a collaborative exhibition. However, restrictions as a result of the pandemic forced us to reconfigure these plans. We had to develop a project that allowed us to continue to work within guidelines set by the government. This restructuring transformed the potential of this project. There was more to tease out, more mistakes to be made and more chance for connection, in the midst of a global pandemic. Being close friends, there is an evident shared duty of care to one another’s well-being. While working together, this played out in the exchange of a series of collages, writings and small sculptural objects. We both worked on top of the materials and sketches that we received in the post, interjecting ourselves into the others’ work. A dialogue began that freed up expectation and any preciousness one might have with one’s own work. A level of trust and intuition was developed, and a shared language began to emerge, confronting something new, something that brought bouts of joy in uncertain times.

Working from separate counties, we depended on one another through meeting milestones within the project via virtual spaces. We maintained this dialogue and began preparation for our next venture of this collaboration. In the meantime, Kate was invited to curate a show of her sculptural works and a series of Ellen’s works on paper in the Sarah Walker Gallery, Cork in July 2020. We re-connected in December of 2020 to work together in BKB Studios, Glasnevin. BKB Studios was founded by fellow TUD alumni Emily Brennan, Gemma Brown and Bianca Kennedy to provide artists with much-needed, affordable studio facilities and collaborative working spaces in Dublin. In mid-December, we took over the BKB Studio’s gallery space for four days of making.

We worked collaboratively to create a number of assemblages through material exploration and responding to the characteristics of the gallery. We utilised processes of cast-making and assembling to build site-responsive works, while taking time to reflect and reconfigure over the four days. This time provided us with as many questions as answers. We had completed works, works yet to be figured out and small-scale material explorations with a future – all of which hold equal importance. Questions beget more questions and this, in fact, works for us as artists. It is that in-between space that gives us the freedom to move around. Much like the earlier stages in our project, we sought not to allow the work to become complete in a way that was too ‘finished’. As the objects and materials moved from assemblage to assemblage, their potential multiplied.

At the end of this stage of the project, we released a 75-page online PDF that documents the work and can be found on The Dock’s website (thedock.ie). This body of research will inform our forthcoming show, ‘Parallel [in]Between’ at Platform Arts, Belfast, in May 2021. Utilising the tools garnered from working on our collaborative commission, we will build on the vernacular established while working together extensively over the last year. This show will exercise our personally developed visual language and engagement with the gallery as our new site.

Since the beginning of the new year – as the country remained in lockdown – our planning of the show together remained remote. Alongside exhibiting together in Platform Arts in May 2021, Ellen will also be showing in ‘Second Summer’, a group exhibition at The Dock (22 May – 28 August 2021) and will show later in the year at Draíocht Arts Centre as part of the group show, ‘Platform’. Kate has been curating and facilitating a site-responsive project, titled ‘Non-Events’, which includes Ellen and four other artists: Áine Farrelly, Emma Griffin, Rachael Melvin and Lucy Tevlin. Kate’s exhibition design and the artists’ responses to the project will be shown in the newly established, artist-run Arcade Studios, Belfast, this August. Kate’s solo show in Ballina Arts Centre, County Mayo, will open in 2022.

Kate Murphy is an artist-curator based in Kildare, who works with the process of documentation and constructs sculptural interventions in space. She recently joined Catalyst Arts as a co-director.

Ellen Duffy is an artist from Dublin who works with sculptural assemblage, drawing and collage. She is currently a member of the RHA Studios.