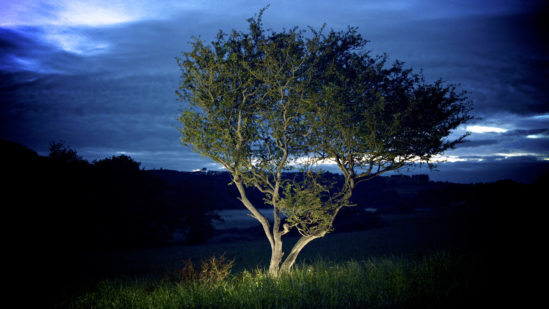 David Ian Bickley’s latest film, Threads, was presented on Culture Night in a darkened studio space at Uillinn: West Cork Arts Centre. In the small landing leading to this space, Three Candles was installed, comprising a prose piece and a video interview with local historian Gerald O’Brien, shown on a monitor with headphones. The story tells of a body lost in a river and located using folk-magic means. This tale was the inspiration for Threads, as well as the prose piece, a meandering stream of consciousness, presented on scrolls of paper, hanging in columns on two walls: “…Alive the thread, that runs like a river. Gently through this land of mind…”

I found this method of presentation somewhat problematic. Framing the entrance to the film screening with the display of supporting material seemed to influence my interpretation of the installation too rigidly. However, the presentation of this material does raise interesting questions regarding the importance of an artist’s intention behind their artworks, and how these may be read by an audience.

Threads was screened on the back wall, while footage of rippling water was projected simultaneously on the floor of the space, reminiscent of rippling desert sand. The piece resonated anecdotally with Anita Groener’s exhibition, ‘The past is a foreign country’, being shown in Uillinn’s main gallery space. The surrounding context and viewpoint we bring with us can often colour how we view and interpret an artwork. The ability of an artist to mould the meaning we extract from their work can also be dependent on many external factors – from the site of installation, to events taking place in society.

Playing on a loop without titles or credits, Threads is open to multiple readings. The atmospheric unfolding of imagery in the film is achieved through soft, slow dissolves, echoing the fog and mist veiling many of the scenes. All of this footage seems to have been shot at night. The dominant motif running through the film is the moon – an orb that fades in and out of focus, moving on a trajectory from left to right across the screen, increasing and decreasing in size, waxing and waning. Another recurring image is that of a thin, bright pink, worn-looking rope, which cuts along the frame horizontally. I interpreted this sequence as referencing the encroachment of man-made systems on the natural world, including the choking of the world’s seas by plastic waste. This interpretation held resonance for me, given that the film was screened on the same day as the student-led Global Climate Strike, when young people around the world took to the streets to protest government inaction on climate catastrophe.

The film soundtrack comprises an assemblage of natural sounds, against a constant backdrop of lapping water. An electronic drone soundscape swells and subsides, creating a vaguely ominous atmosphere. Apocalyptic readings of the work bring to mind Lars Von Trier’s melodrama, Melancholia (2011), in which a wealthy family holes up in a countryside mansion, waiting out their final days until the large planet Melancholia collides with Earth. Touching on the ‘uncanny valley’ effect – where artificial simulations look almost life-like – Threads has an unreal, luminescent quality. Something is not quite right, but it is difficult to identify what.

The camera’s vantagepoint shifts from that of an individual, to one of a transcendental all-seeing eye. It moves slowly, snaking through reeds and grass, capturing the sparkling moonlight reflecting off the velvety, ultramarine water. Intermittently, the large silver moon dominates the screen; at other times, it is small and seen through a lattice of twigs and leaves. Rushes emerge from a dark background, an oozing, bubbling ground, with splashes of light and wisps of fog. Some frames seem to suggest that what is depicted is a model of some kind. There is deliberate play with scale, and it can be difficult to discern proportions, as things come in and out of focus, before disappearing into the mist. Threads works impressively as an immersive installation, with the combined sound and imagery producing a meditative, hypnotic effect on the viewer.

Catherine Harty is a member of the Cork Artists Collective and a curator at The Guesthouse Project.