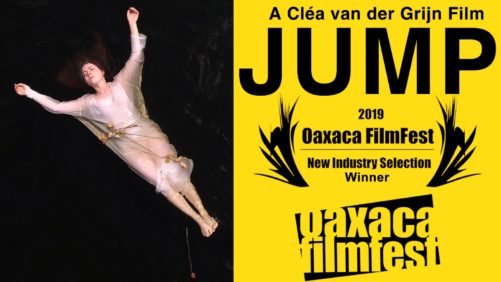 JUMP began as part of an immersive installation with film / paintings / neon. It toured (with an Arts Council Touring Grant) for 9 months in 5 venues nationally before getting wings as a film in its own right and being shown on international platforms.

Since 2008 van der Grijn has been working on the subject of death. Her practice deals with unraveling the complexities associated around the culture of death and reconstructed memory, researching the myth of repressed memory, re-imagining and process all become part her narrative, understanding the rational, social and emotional circumstances that become constructed around memory and time.

In JUMP (2018) van der Grijn asks what are the memories between the transitional period of jumping + hitting the water when life becomes momentarily suspended. When viewed from our typical perspective of being within and perceiving the world according to linear time, the period of a jump, between the precipitation of the action and the landing, the splash, happens in an instant; and from this perspective, not much can ‘happen’ in an instant. This is the effect of forgetting that linear time is a projection, a construct that the mind creates to make it possible to self-identify and exist in the world.