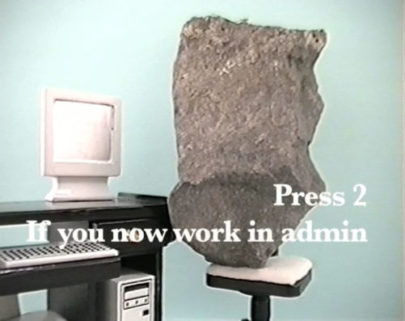 Wexford County Council Arts Department and Wexford Arts Centre in partnership with IT Carlow Wexford Campus School of Art and Design have announce Laura Fitzgerald as the recipient of the EMERGENCE Visual Art Award 2019. As a joint initiative between the three organisations, the award’s aim is to support visual artists with the development and promotion of their practice. Presented biannually, the award has a monetary value of €15,000 and includes mentorship support over the award cycle to the value of €2,000 and a solo exhibition at Wexford Arts Centre in September 2021. In addition, the artist has the opportunity to engage with IT Carlow Wexford Campus School of Art & Design and avail of practical resources at the campus.

Autobiographical and fictional narratives are explored in Laura Fitzgerald’s practice through drawing, text and video. Her work references her own rural background and general anxieties of what it means to be an artist. Fitzgerald constructs representational spaces using models and projections, and uses text self-reflexively to consider the act of making art as a romanticised endeavour and an experience-based reality. Through her video work, she draws on the nuanced differences between the documentary veracity and archival montage, generating ambiguity between what is fiction and not. Laura infuses her works with humour, presenting a self-critical commentary of how and what it is to be an artist.

For the EMERGENCE Award, Laura will produce a series of videos and drawings exploring notions of success and failure and the usefulness of art itself, using places of interest in County Wexford to frame the works. Laura will work collaboratively with interested students of IT Carlow Wexford Campus of Art & Design on a series of art writing workshops to develop the video narratives.

Laura Fitzgerald graduated from the Royal College of Art London in 2013 and is currently in residence at the Fire Station Artists’ Studios, Dublin. She recently undertook a residency at WARP Artist Village, Netherlands, and the Lucian Freud Residency at the Irish Museum of Modern Art, Dublin. She has been awarded two consecutive residencies to the International Studio & Curatorial Program in New York, supported by the Arts Council Travel and Training Award. In 2016, she was awarded an Arts Council Next Generation Award to support a new body of work. This research culminated in video works; Field Rearch Ctd and P45, which won the Claremorris Open award in 2017, with screenings at ISCP NYC, Towner Art UK, Crate Project Space UK and Zona Mista, London, UK with Laure Prouvost.

The EMERGENCE Visual Art Award is supported by the Arts Council.