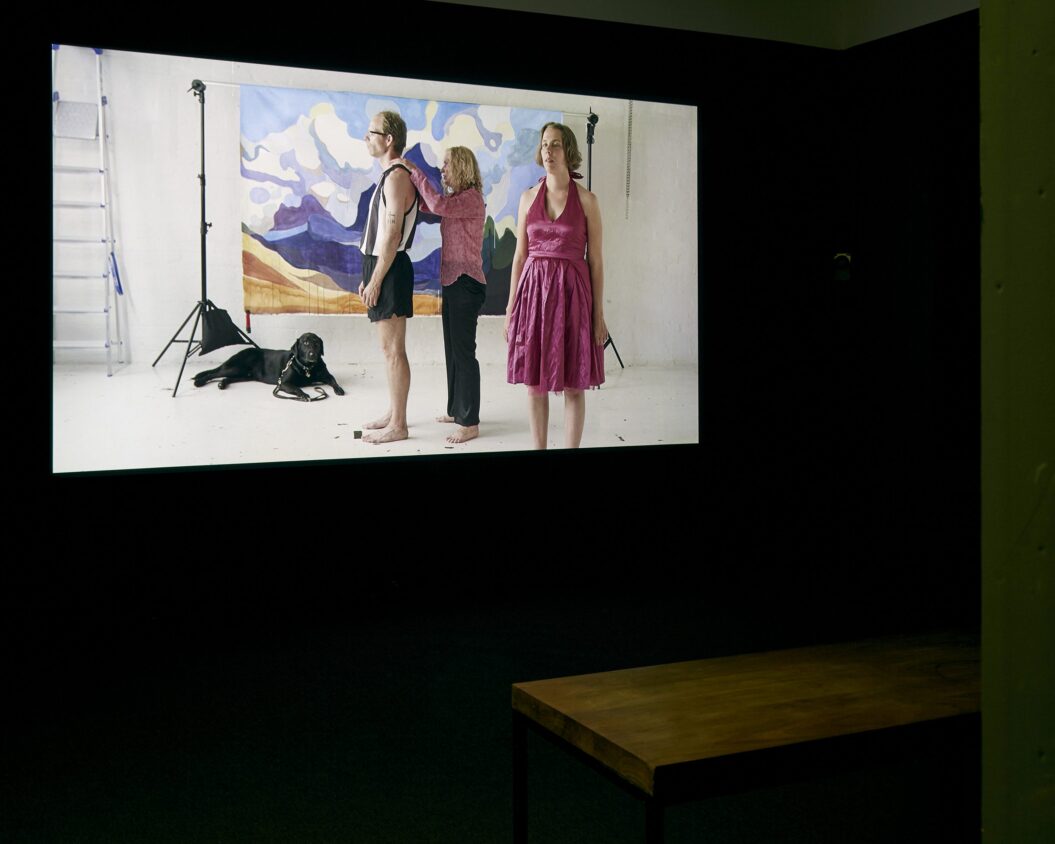 ‘Lavish and Judicious’ is a multivalent and complex exhibition, presented across the three gallery spaces at CCA and featuring work by four female artists: Aideen Doran, Jaana Kokko, Jennifer Trouton and Caroline Achaintre. There are essentially six artworks in the exhibition, including a single-channel film installation and sound installation. According to the exhibition statement, these works speak to “the overlaps between the historical, the ethnological, landscape and colonialism” and how these forces can be “mapped to contemporary systems of production”.

The exhibition’s starting point is Sion Mills, a model village and linen mill in County Tyrone, established by the Herdman family in 1835 to provide employment and housing for factory workers and their families. The title originates from Mr and Mrs Samuel Hall’s 1845 travelogue, in which they praise the Herdmans for their dedication to their workforce and the way they “distribut[e] motives to improvement, lavishly and judiciously”. As part of the new ‘CCA Editions’ series, and to coincide with the exhibition, artist Colin Darke has produced a screenprint on linen entitled Beauty is in the Streets, which takes the concept of the model village at Sion Mills and extends this thematic reference to the Haussmannisation of Paris during the Second French Empire (1852–1870). ‘Lavish and Judicious’ coincides with the Linen Biennale Northern Ireland 2018, resonating perfectly with the themes of past, present and future labour landscapes.

The centrepiece of the exhibition is a newly-commissioned sound work by Aideen Doran, entitled Woman Sitting at the Machine, Thinking (2018). Encircled with a black curtain and a blue light visible within, the installation immediately entices the viewer, upon entering the gallery. The artwork is based on Karen Brodine’s poem of the same name, ingeniously referencing the past and the present, through the distillation, overlap and chorus of female voices: “Her face shining back from the silver case, her fingers sharp tacks calling up the digits… When she typeset for Safeway, dipping her hands in processor chemicals, her hands burned and peeled, and her chest ached from the fumes… so our labour gathers… then they spit the body out the door at 65”. The installation is distinctive, inherently sensory and inviting. The lighting is conducive to rest and reflection, and visitors can listen to the voices by lying down on an elevated stage, which is covered in a soft blue fabric. Jaana Kokko’s nuanced and absorbing single-channel film, What There Is to See (2017), looks at landscape through a range of historical and ideological lenses – including romanticism, nationalism and colonialism – inviting us to consider their impact on our relationship with nature and the world around us. The actors are from the Theatre of Visually Impaired in Helsinki. With the script composed as a series of tableaux arrangements, the actors reposition themselves and take turns to speak: “… we were supposed to perform that text by Brunhoff, the social utopia of Babar the Elephant… That book does have a mild nuance of Western cultural imperialism… A mild one? It’s colonialist through and through… they have a barter economy… I quite like the Marxist concept here…”.

Two exquisite realist paintings by Jennifer Trouton feature in Gallery 3 – Ariadne’s Thread (2013) and Longue Durée (2014). In the latter, Trouton juxtaposes red-and-white-patterned drapery against green and gold wallpaper, mirroring the compositional style of Dutch interior painting. The artist has subverted the iconography featured in the wallpaper. This particular toile illustrates foxhunting, to which Trouton has added images of Irish women and children working on the land. Having researched this painting, I am aware that the fabric in the foreground is a hand-stitched colonial blanket, brought back to Ireland from America in the early 1900s by Trouton’s great grandmother. In the painting, this functional blanket acts as a counterpoint to the luxurious wallpaper, tying in with the oxymoronic sentiment of the exhibition’s title.

In my view, it would have been beneficial if such contextual information (about Trouton’s paintings and other artworks) could have been provided, however I’m aware that CCA adheres to a pared-down curatorial approach. Equally, Caroline Achaintre’s work Rudder (2018) is somewhat of an anomaly, as a textile work in isolation. The gallery text highlights the artist’s novel approach to creating handmade textiles, which includes deliberate mistakes and a rough finish. It would have been interesting to see another example of Achaintre’s practice, to augment her presence. However, overall, I found the exhibition compelling and the theme novel; it offered a space for reflection on another era, through a series of contemporary lenses.

Marianne O’Kane Boal is a writer on art and architecture and a member of AICA.