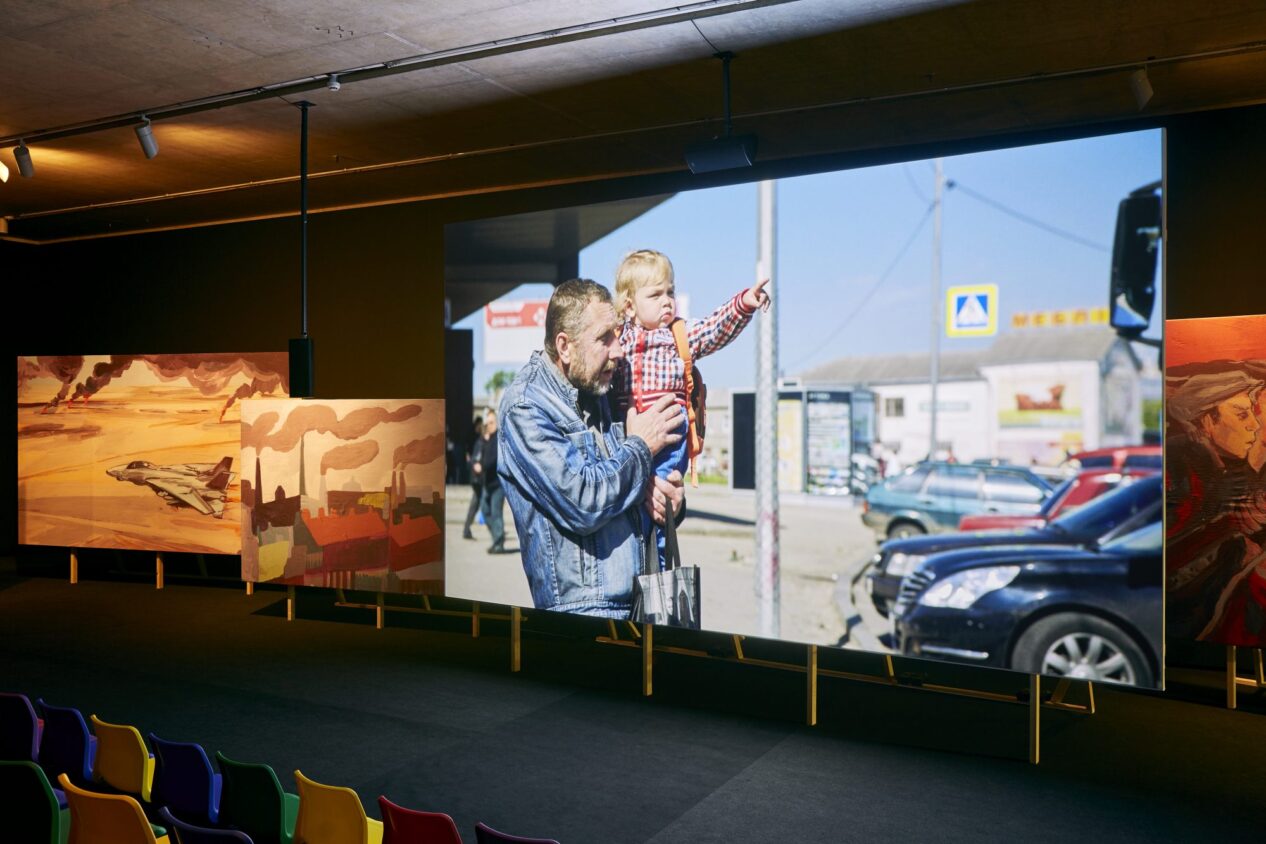 So often, when artists reach a certain level of recognition, when the money rolls in and they are showered with very large budgets to play with, their integrity melts into air. They find themselves driven by the market, their hard-fought methods and concepts diluted by the establishment that supports them. Happily, Phil Collins is a rare exception to this rule and this show at the MAC provides evidence of his continued growth over the years.

The centrepiece of ‘This is the Day’ is the hour-long film, Ceremony (2017), commemorating the Russian Revolution. It tells the story of Collins’ relocation of a decommissioned public statue of Friedrich Engels from a Ukrainian village to Manchester, the revolutionary’s home for twenty years. The film includes passages from Engels’s classic 1845 book, The Condition of the Working Class in England, read by the actor Maxine Peake. Another familiar actor, Carla Henry, makes an impassioned commentary on contemporary class struggles.

The film has numerous narratives interwoven throughout. Engels’s legacy is explored by Ukranian school children, while the “communist” past is recalled by people old enough to remember. We follow the statue’s journey through Europe and its arrival in Manchester. The film is interspliced with found footage of Lenin during the Revolution and of his statue being felled during the collapse of the Stalinist bloc from 1989 onwards.

A number of stories are enacted: a young woman discusses with her friend her desire to be a dancer; factory workers talk about the realities of their lives (in their roles as the grave-diggers of capitalism); a Jobseeker’s Allowance claimant is advised on uncovering the system’s mysteries; volunteers display the iniquities of food banks; a homeless single mother receives help from an advisor; and, most movingly, a frustrated school student is encouraged by her lovely father to continue with her studies.

These are soap opera scenes, located in the real world of oppression and struggle, unified at the end of the film as the statue of Engels passes by on the back of a lorry. Its arrival is celebrated in the ceremony of the film’s title. The festival atmosphere is a beautiful and moving instance of working-class solidarity, with crowds engaging in serious political discussions and speeches, while enjoying the silliness of, for example, instructions on successful shoplifting while wearing false Engels beards. The meaning of style (2011) is a short film of less than five minutes, in which Collins worked with anti-fascist skinheads in Malaysia. Adopting the style of British skinheads of the sixties and seventies – Ben Shermans, braces, DMs and of course shaved heads (while the one young woman who appears has a feather-cut). They act out their roles accordingly, swaggering, smoking and fighting, which, despite the kicking, is more playful than violent (think of the lower-rank T-Birds in Grease). There is a sense of cool companionship and the underlying gentility is enhanced when a box of butterflies is released. The insects rest undisturbed on bodies, heads and faces as the young men sit oblivious, reading copies of 1970s publications, including Radio Times and Melody Maker – engaging with the past era from which their style originates.

Delete Beach (2016) is a collaboration with the Japanese anime studios, STUDIO4°C. Set in an ostensibly utopian future in which carbon-based energy has been outlawed, a resistance group (calling themselves Burners, but referred to as Lemmings) rebels against a still-oppressive capitalist system. Their rebellion, under the slogan “Terror is apathy/Apathy terror/Blood for Oil/Poetry is Resistance”, centres around a new bond with oil – smoking it, injecting it and finally committing suicide in order to become it, after a million years has passed. The film is shown in an installation that echoes its content, but adds little. The audience sits on oil barrels on a makeshift beach, the imagery reflected in a pool below the screen.

This is one of those rare moments when an exhibition stimulates critical thought and emotional engagement, well beyond the gallery encounter. Ceremony genuinely made me cry a little and inspired me to reread my Engels.

Colin Darke is an artist, curator and writer based in Belfast.