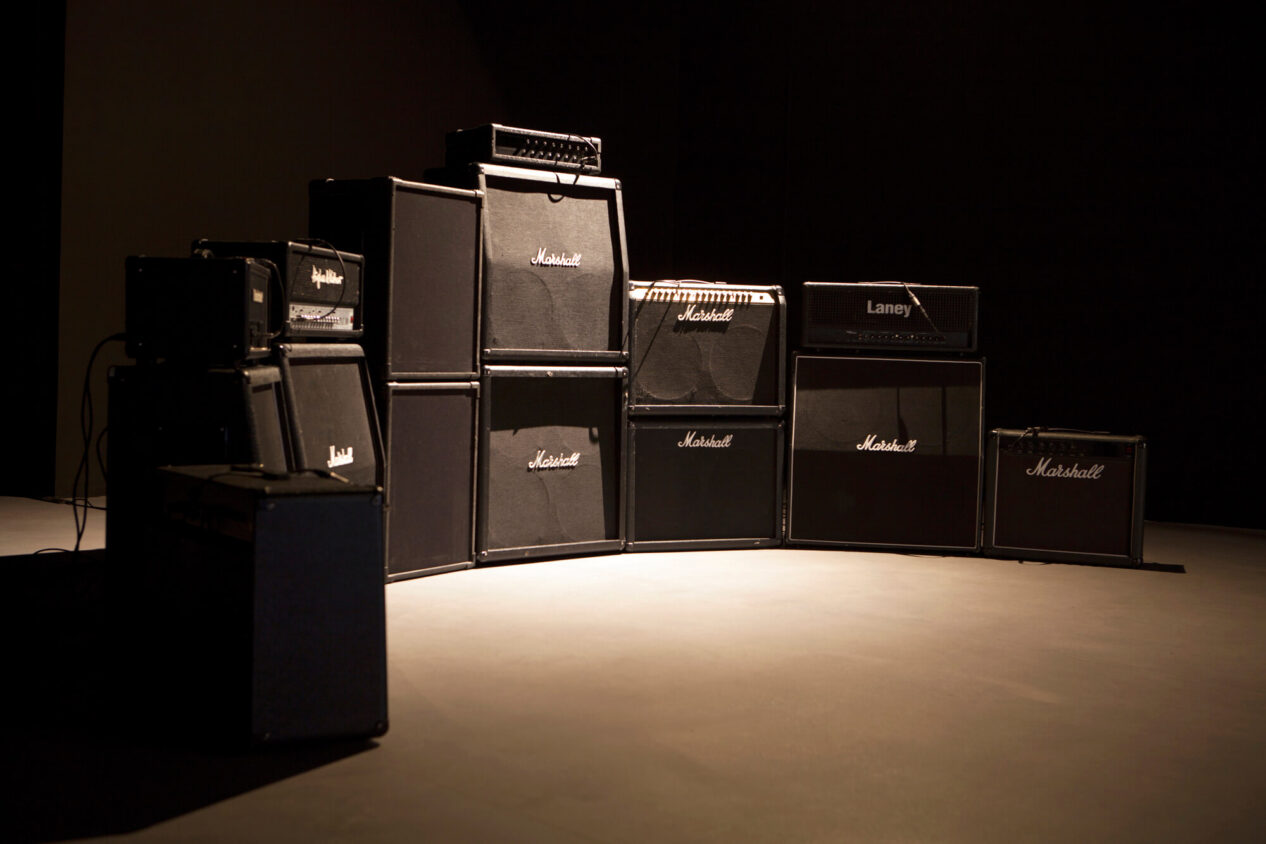 Along the Grand Promenade of Derry’s City Walls stands an empty plinth, which became an empty plinth long before it was fashionable to be so. It is what remains of the monument to Governor George Walker, hero to Unionism, which for its atavistic sins was ‘blew up’ by the IRA in 1973. It’s said that hundreds of Bogsiders collected the far-flung debris as souvenirs of the war on triumphalist art. Where are all the bits of Governor Walker now?

An installation by artist Liam Crichton and musician Autumns (AKA Christian Donaghey), titled Stereo Object, enacts a symbolic séance on his remains, with particular interest in a kind of psycho-kinetic interpretation of sound within the built environment. Void’s main gallery is visually sparse, and all the more so for its great scale, with only a cathode-ray television sitting in the corner, permanently stuck in static. A handful of polaroid photographs are dotted here and there above eye-level, as if they don’t want to be seen: one is an unclothed male chest and right arm, with a black cross painted across the bicep; in another, a car is parked outside a boutique in the curvy international style. In this city, focusing attention on a car, parked inexplicably outside a building, is no innocent gesture.

A wall text reading “NO WORDS” is set against a grey colour field, uneven and ragged at the edges, as though hastily rolled on just before you turned your gaze in its direction. This being Derry, these words are resonant with Willie Doherty’s early photographic works that were overlaid with text. Doherty employs the printed word to symbolically alienate images of demarcated territories, effecting a banality that is instructive in this case. If we were to take the press release at its word – that Crichton “[invokes] a presence of absence, or equally, the absence as presence” – then not only would these no-words-that-are-words or the no-statue-that-is-a-statue be anodyne, but our role as viewers would also be redundant. Falling somewhere between aphorism and cliché, it makes me think about Doherty’s film, At The End Of The Day (1994), and its acrid recitation of generic political apophthegms: “At the end of the day there’s no going back – There’s no going back to the past –There’s no future in the past”. Cliché can become a rich critical seam: it is a temporal artefact whose movement through time gives depth; it is a meme foregrounding originality; in this context, the banality of “NO WORDS” seems to radiate off the wall, texturising the soundscape.

A cluster of guitar amplifiers, with dimensions modelled on the Walker Memorial Plinth, is installed out of sight in a smaller antechamber, flooding the gallery with a sonic composition made by Autumns and Crichton. The music is constructed from field recordings taken around the memorial, which are sonically destroyed – thankfully not by a 100lb bomb, this time – and musically reconstructed with electronics, synths and percussion.

It is difficult not to hear the clamour of an Apprentice Boys’ parade in the percussive patterns woven throughout the piece, and impossible not to discern the crackling of gunshots. The notes of sectarianism mingle with everyday highlights: a distant car alarm; wind crackling through a microphone; disembodied voices from the yellow-jacketed tour guides of Derry’s troubles-tourism economy.

I often observe, and share, the conceit of seeing art as a critical destination: the terminus where subjects are disgorged, naked and otherwise honest, ‘Telling truth to power!’, etcetera. This is why it’s tempting to see Stereo Object as such a destination, that the artist and institution have revealed quod erat demonstrandum, the cultural problem that rained upon the Bogside in smithereens. I know I’m supposed to hear these references to gunshots and marching bands and experience something remedial, but these sounds enter a space permeated with banality, and they are changed by it.

The repetitious banalities of troubles-art are somehow elevated, perhaps illustrating how a ‘millennial’ generation of artists relate to the conflict. Where Doherty’s oeuvre exhibits immediacy – a despairing and lugubrious vision of a culture hollowing out – Stereo Object is the performance of the hollow that remains. It is a performance of our culture’s estrangement from the gravity of violence; the way shootings and bombings feel so distant, even if they happen right up the street. It’s why my Great Auntie Molly grabbed an empty pram and set about gathering as many pieces of Governor Walker, as could be manageably wheeled home.