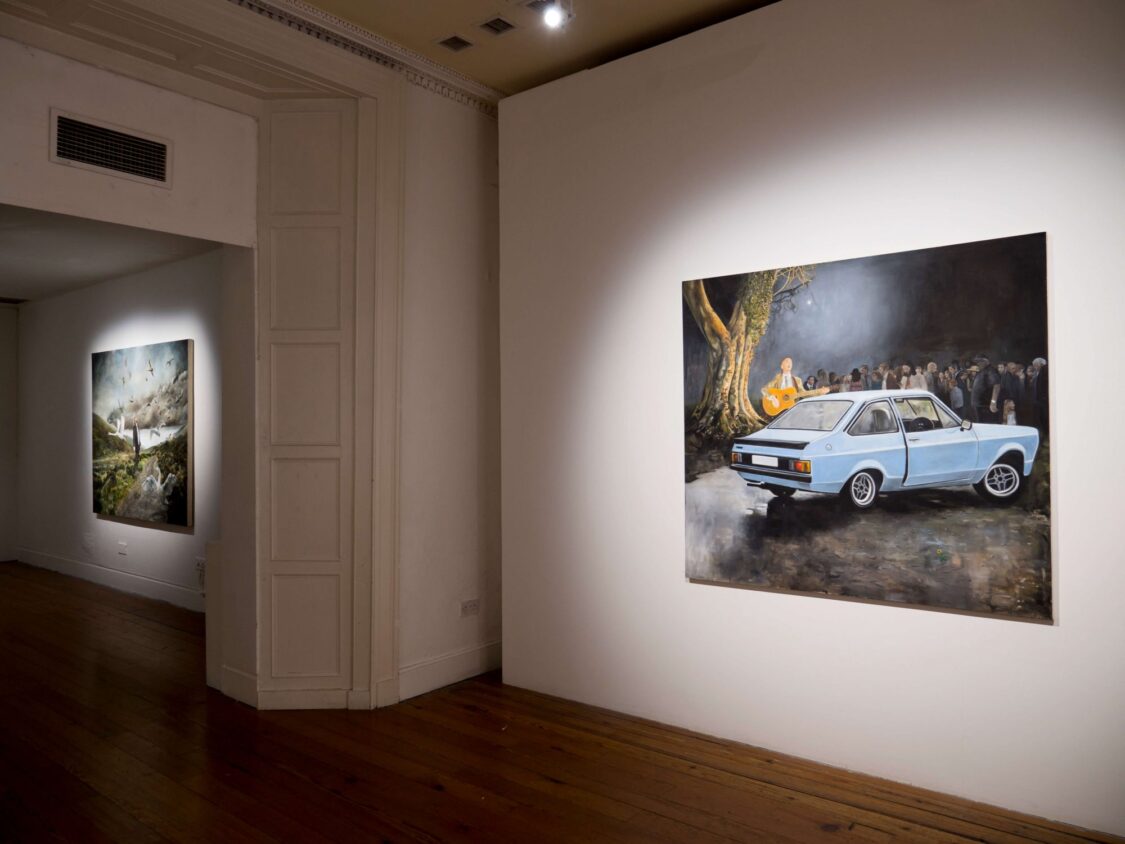 ‘Procession’ is a powerfully evocative exhibition by Limerick-based painter, Gerry Davis, which generates extensive narratives. In this respect, the work demonstrates how aesthetic experience transcends language. The exhibition comprises a new body of realist paintings that address timeless and contemporary issues pertaining to the function of art. Each painting poses questions about the nature of looking, as well as the interconnected roles of the artist, the viewer and the wider public.

In some of the paintings, there is an atmosphere of solitude and depravation. For example, Studio Space 4 details a dated studio, which appears to be lacking in central heating, as evidenced by an electric heater. Some works contain depictions of other paintings within them, prompting us to look (and look again) at hidden details – like rat poison in the corner of a studio, or an easel standing precariously on two legs. Nevertheless, a degree of optimism does permeate this work; fire features as a recurring motif, harking to the primitive. At the most fundamental level, there is mark-making and pictorial space that continues to burn bright in the digital age.

Observation is another key theme that recurs throughout the exhibition. Generally, we do not know what Davis’s figures are looking at, but such propositions open avenues for critical discussion. For example, Observers shows three people on a low wooden platform staring at something in the sky.

Similarly, the titular painting, Procession – in which many tiny figures climb a huge observation deck – shows how looking can be a social and communal act, with the hordes of people queuing indicating that there is something worth looking at. In Pulling Weeds we find a man thinning out the dead and useless parts of nature; the scene is both emotionally and philosophically charged, suggesting that the man is trying to get to the root of things, by deciphering what may or may not be important to him.

Most of the paintings present things out of their usual context: a solitary easel is depicted in the wilderness; an artist appears out of focus in the wild. A cross-section of plein air paintings and indoor studios appear to speak to the dialogical relationship between culture and nature, of which art is born. True to its title, a religiosity is present across the exhibition, creating charged atmospheres of uncertainty. Artist’s Talk shows the artist presenting in a Chapel, reflecting historical debates about the artist as ‘saviour’. This is juxtaposed with the stark isolation conveyed in a number of other pieces that clearly document the artist alone at work, in less than ideal circumstances. Such scenes are not new for Davis, whose previous body of work portrays empty artists’ workspaces. ‘Procession’ extends beyond the studio to encompass the extended communities that make up the art world, pointing to the idea that an artwork is ultimately completed by an audience.

Some paintings are more personal than others. Still Life with Radio and Dole Letter is a beautifully rendered and haunting image which describes the personal cost and desolation of being a practising artist. EVA Baby depicts a baby in a pram, neglected in a dark and lonely place – a reference perhaps, to the many submissions an artist makes, in the hope of recognition. A sense of fear and apprehension accompanies each proposal, as an artwork breaks ties with its creator, to be judged in the world at large.

Despite this, there is the feeling that a life of art is worth pursuing; regardless of self-doubt and personal sacrifices, the artist expresses a compulsion to remain on this journey. It is refreshing to find that Davis’ paintings are skilfully crafted and work well together as a coherent series. The artist makes a case for painting, based on what he expresses and also how he expresses it. Although this body of work is about being an artist, the beauty of it is that it is not self-obsessed – it is not personal confession parading as art. The exhibition speaks not just of its creator, but universally to all artists, all viewers and all people who wonder.

Colleen Fitzpatrick is an artist and writer based in Westport, County Mayo. She holds a PhD from NUIG in the Philosophy of Art and Culture.