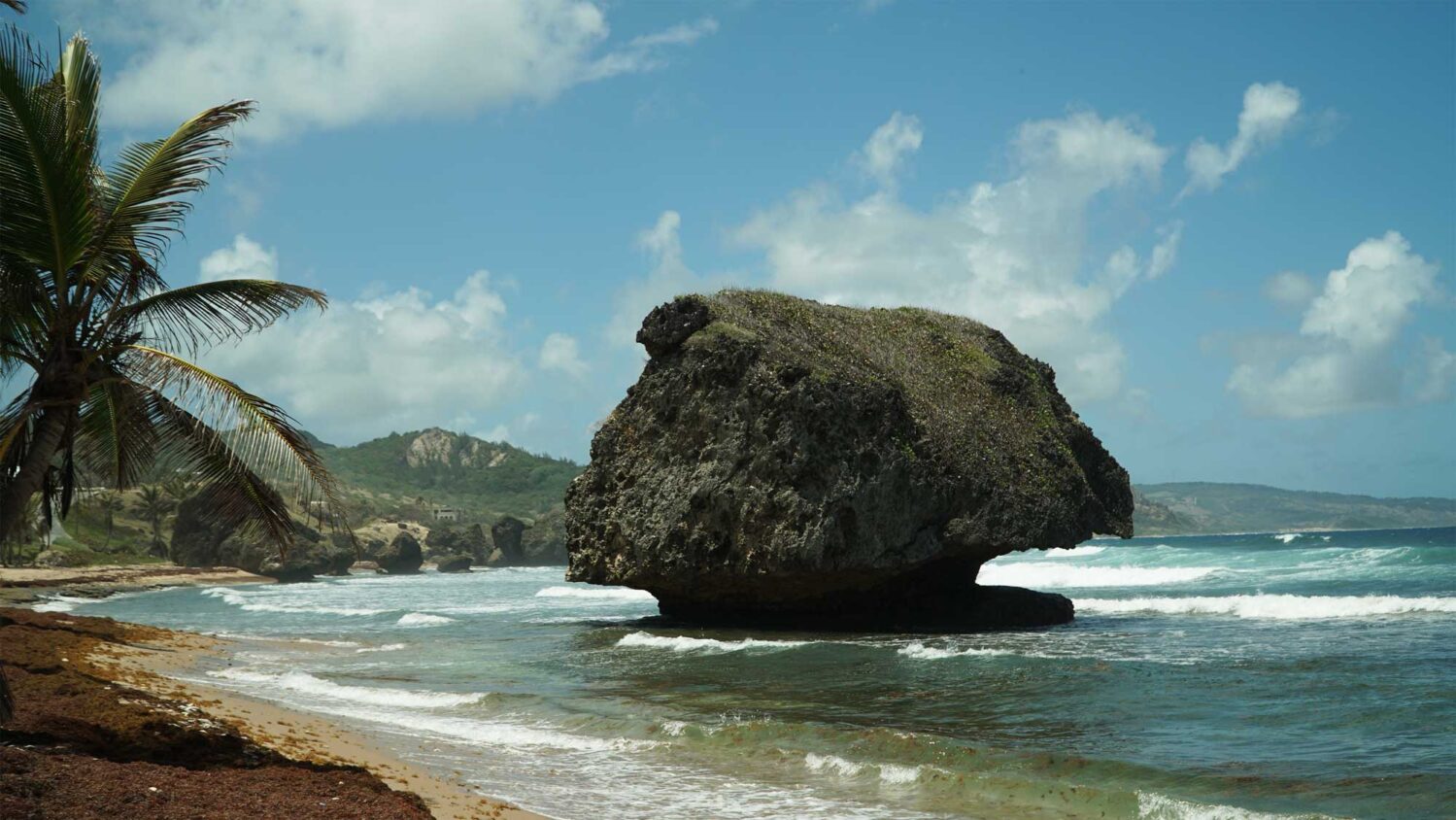 Awareness of Ireland’s involvement in the history of the British colonial project is generally one-sided, with national imagination focusing on the ‘epic’ Irish struggle against England, rather than acknowledging Irish social or cultural exchange within the wider world of empire. Marianne Keating’s exhibition, ‘The Ocean Between’, fulfils a vital role in redressing this imbalance, with rigorous research and nuanced, objective presentations. Her seven film installations are the result of years of archival research relating to the largely forgotten history of indentured Irish labourers in Barbados and Jamaica, and are linked significantly to the site of display (Crawford Art Gallery served as Cork’s Customs House during the 1700s), while couching this account within the larger postcolonial history of the Caribbean.

Occupying the gallery’s top floor, Keating’s installation unfolds a dense, multi-layered narrative. The curved corridor is hung with large photographic prints of Jamaica’s rocky coast and archival press images of political rallies. The two-channel film, Landlessness (2017), is accessed first, focusing on the largely undocumented and forgotten Irish emigrants, destined for servitude on Jamaican plantations between 1835 and 1842, the years preceeding the Irish Famine. The two projections run concurrently: on one side, panning landscape shots of the sparse meadows of the Burren and the wind-battered Atlantic coast are overlaid with a script relating the conditions of extreme poverty witnessed by Alexis de Tocqueville on his travels through Ireland in 1835. The paired screen interrupts footage of dense Jamaican forest and sugar cane fields with a narrative text derived from records unearthed by Keating in the national archives of Ireland, England and Jamaica.

An exchange between the Land and Emigration Commissioner for Great Britain and Ireland and the founder of the West India Immigration Society conveys the financial viability of recruiting Irish indentured labourers after the abolition of slavery. Meanwhile a transcript of a conversation between Jamaica’s Governor in Chief and Agent-General of Immigrants records the fate suffered by some of those immigrants upon arrival – including sickness and discontent, leading to their being shipped home, to avoid their perceived rebelliousness spreading to other plantations. Although presenting accounts from those in positions of power, these textual elements nevertheless give voice to the subordinate ‘other’. Despite the emotive nature of the subject matter, Landlessness is admirable in its considered restraint. Keating is careful in the films and accompanying literature to differentiate between indentured labour and slavery, and although the sense of dislocation and displacement is powerfully evoked by the contrasting landscapes, the experience of the narrative as text, rather than as a voiceover, encourages a more measured, meditative engagement.

Indeed, the ways in which Keating has choreographed the entire exhibition – contextualising this narrative within the longer history of colonialism and its legacy in the Caribbean – is deeply effective. Occupying the old drawing rooms on the gallery’s second floor, two large projections mirror each other, with small monitors placed either side of the doorways. Land-Path Migration (2019) positions the colonial project within a much longer story of our relationship with land as a resource to be exploited. In a voiceover, Keating quotes the geographer Vincent Gaffney, whose expanded definition of ‘land’ extends to the minerals beneath the surface, as well and the flora and fauna above: land, he argues, is a resource, always second-hand and criss-crossed by generations of people.

Meanwhile, Better Must Come – A New Jamaica (2019) splices together archival footage of Norman Washington Manley and Alexander Bustamante, both men of Irish descent, on the campaign trail preceding Jamaica’s post-independence elections, with recent news coverage documenting a community protest against political neglect, poverty and disenfranchisement. In the same room, Make the Economy Scream (2018) screens an interview with journalist Louis Wold, discussing the alleged CIA attempt to destabilise the Michael Manley government in Jamaica.

Keating’s intelligent and nuanced show is effective in communicating the complexity of the cultural and political hangovers of colonialism, usefully interspersing broad ranging political accounts with personal narratives, while balancing an unfamiliar aspect of Irish history with the wider legacies of violence, political interference and disenfranchisement across the Caribbean. It is also significant as the first in a series of artist-directed projects hosted by Crawford, to support research into more complex understandings of identity and history.

Sarah Kelleher is a freelance critic, curator and art historian. She is co-editor of Enclave Review and is currently working on a PhD on contemporary Irish sculpture.