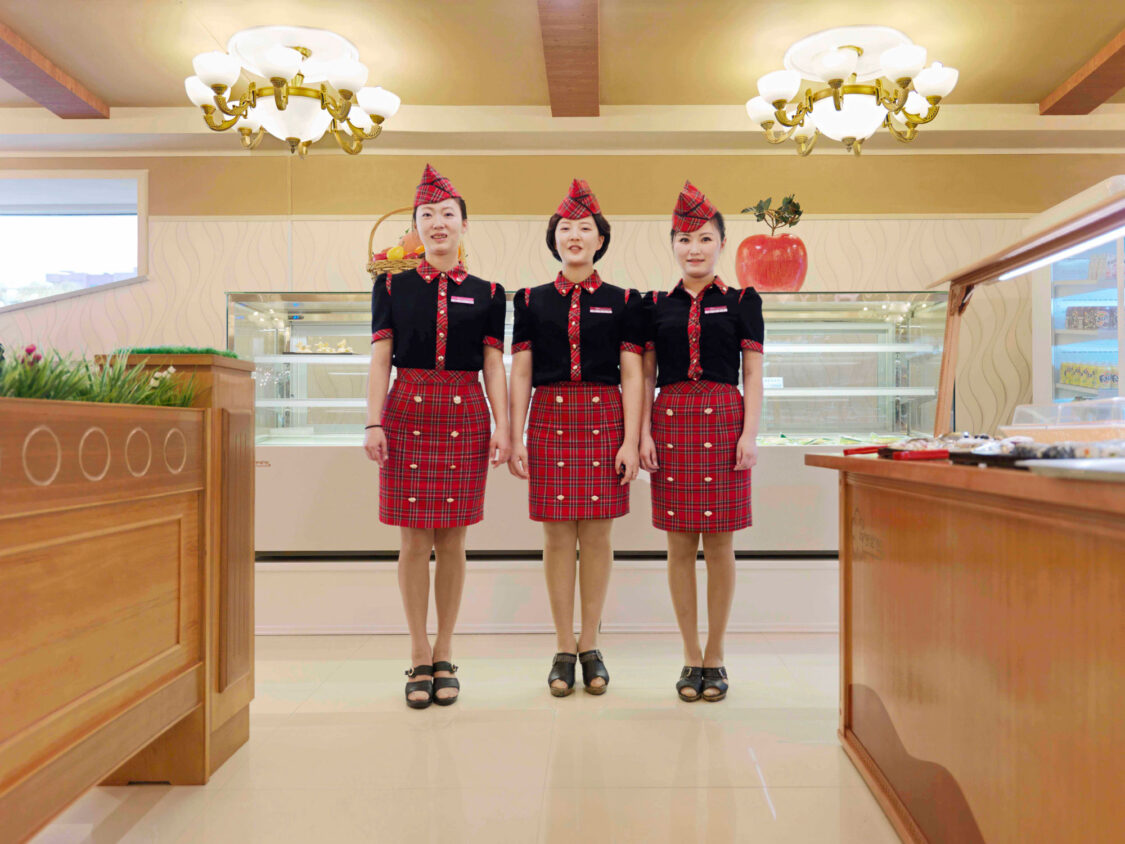 As part of this year’s Belfast Photo Festival, the Golden Thread Gallery simultaneously held three very different exhibitions, at three very different qualitative levels: Philippe Chancel’s excellent and subtle observation of life within North Korean ideological strictures; a dispassionate survey of political discourse on social media by Marc Lee; and a terrible, ostensibly anti-Trump installation by Erik Kessels & Thomas Mailaender, which is so devoid of the potential for critical engagement that the president would, I’m sure, greet it with gleeful delight.

Philippe Chancel’s ‘Kim Happiness’ consists of a selection from the large body of work he has made in North Korea over a number of years. Contained within the images is a gentle, nuanced critique of the regime, which the artist explains as an attempt at finding authenticity concealed beneath propagandist appearance. This subtlety is a necessary product of his awareness of state-sanctioned lines which must not be crossed.

The installation is dominated by large prints pasted directly onto the gallery walls, with smaller, framed photographs between. The large works – interior shots of the Korean Revolution Museum – generate complex viewing, the audience initially unsure where the gallery ends and the photographs begin.

The first we see is a room dominated by Kim Il-sung’s staff car – an acid yellow Russian Pobeda, whose dents, scratches and signs of wear are heightened by the shiny perfection of the marble plinth on which it stands. Behind are the first of the many photographs-within-photographs included in the show. In this case, three photographs, in ugly gold frames with red fabric surrounds, of Kim giving inspirational speeches – two with the ubiquitous North Korean ideological-happiness smile, and one with a more serious note. In a nearby case is displayed the military coat he wears in this latter photograph, with a quotation from the man situated between, producing an incongruous nod to Joseph Kosuth’s One and Three Chairs.

In another of these large photographs, a museum guide raises her hand to a portrait of the young Kim, while behind her are four black-and-white prints of paintings showing him educating the entranced workers, who are gathered around him. This is standard fare in the Stalinist/Zhdanovist “socialist realist” form, in which the wisdom of the leader is absorbed by all those fortunate enough to find themselves in his presence. Herein lies the reply to the question posed by the exhibition’s umbrella title.

This compositional convention is found in another large, pasted print. Within is an oversized painting, in which Kim Il-sung and Kim Jong-il are surrounded by young children, gazing happily and snuggling up against the patriarchs. This is again typical socialist realism but, because it is a watercolour, it is tonally muted and looks more like an illustration for Matthew 19:14 in a children’s bible: “But Jesus said, Suffer little children, and forbid them not, to come unto me: for of such is the kingdom of heaven.”

This is the strongest trompe l’oeil of all, with a statue and a guide half concealed by pillars on either side. It brought to mind Mantegna’s fresco, The Court of Gonzaga, with its ambiguity between painting and surrounding architectural features. Illusion of this kind can often be problematic, as the loss of oneself in the tableau – and the excessive empathy this engenders – restricts the capacity for critique among its audience. Chancel, however, negates this by re-flattening the remaining wall space with grey-green, butting against the three-dimensionality of the imagery. This juxtaposition of real two-dimensional space and theatrical space returns to the audience its interpretive role.

Hanging on these in-between spaces are a number of smaller framed photographs of people engaging in various aspects of Korean society, including work, play, sport, music and the military. Here we see the North Korea that our own western propaganda conceals – the individuality that pushes its way through the authoritarian uniformity imposed by the oppressive state. These are real people with authentic emotions that peek through the masks they’re expected to wear (including the haughty disdain on the faces of two Olympic athletes, whose arms are linked in genuine solidarity).

This show is a class act – such a pity it was required to share a gallery with the prosaic and the downright disastrous.

Colin Darke is an artist based in Belfast.
colindarke.co.uk