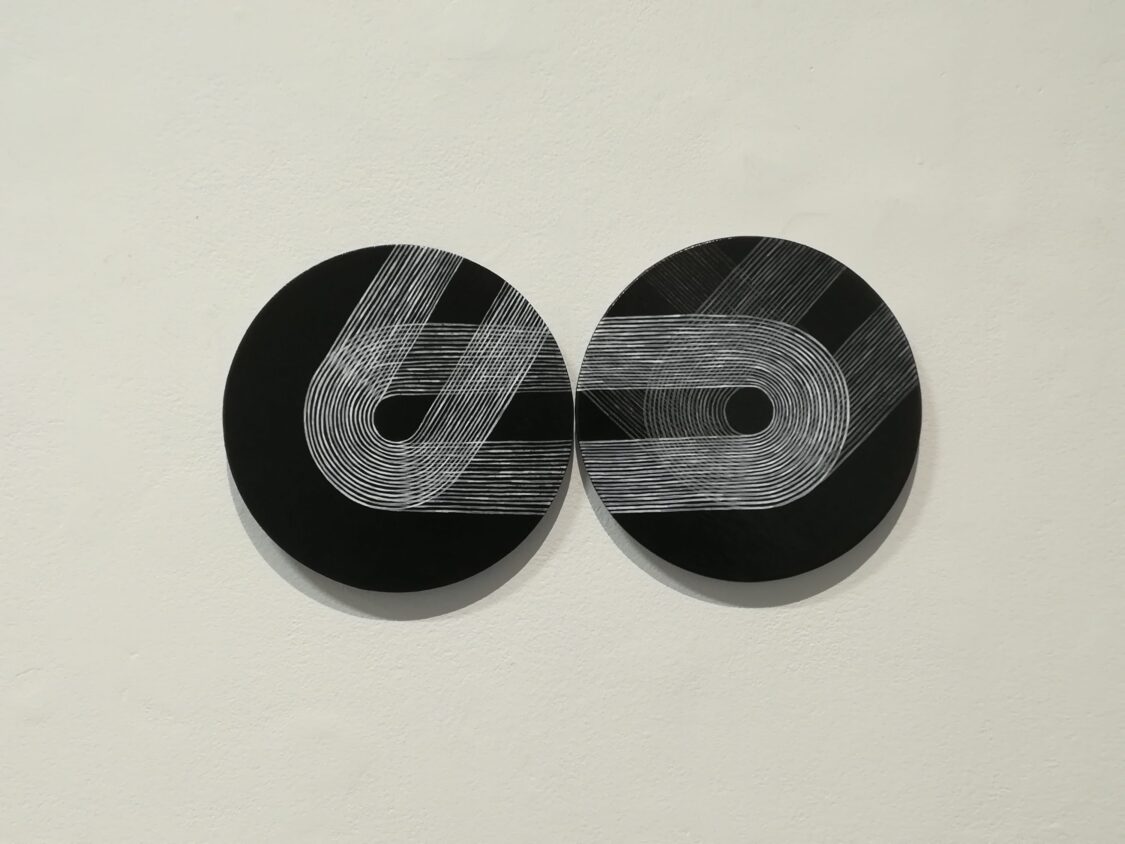 In a TED talk entitled ‘How architecture helped music evolve’, the musician David Byrne (of Talking Heads fame) suggested that the relationship between architecture and music is directly formative. Byrne argued that the spatial and architectural features of a venue specifically influence the sonic and acoustic characters of the music performed there. In other words, American punk band, Black Flag, are to the small hardcore club what AC/DC are to the open-air area. If we imagine visual art to be engaged in a similarly formative relationship with its venues of display, it is interesting to consider whether Niall de Buitléar’s exhibition, ‘Push and Pull’, is specifically informed by the spatial particulars of its host venue, the RHA Ashford Gallery. According to the press release, Byrne’s attempts to “create [musical] compositions that were multi-layered and non-hierarchal” influenced de Buitléar’s work. Comprising 14 paintings and a small sculpture, the exhibition celebrates, with a calm but persistent rigour, the formative logic of interior worlds and the differences that emerge through formal repetition.

Moving from painting to painting, the eye instinctively traces grey and white dancing lines, synced like spinning vinyl to the tune of the circle. Over tar-black lacquered canvas boards, spools of lines seem drawn to various axes of convergence. At times these spools appear like illustrative X-rays of some physical mechanism, yet their stillness is undermined by a persistent sense of fragile flux. The formal logic of mark-making is inseparable from the human hand that intuitively executes it and these wonderful spooling forms, though measured, seem to bloat and burst into the unoccupied territories of the black canvas void. At its most abstract, the work suggests inorganic permanence. There is a sense that these geometric abstractions are to remain repeatable and eternal. But a quiet dichotomy keeps reverberating, and somehow the charming variations that emerge seem at odds with any real sense of historicity.

In his 1966 essay, Entropy and the New Monuments, Robert Smithson pointed to artworks that he felt might cause us to forego linear conceptions of the future.1 In the works cited, perishable materials often took precedence over those that might invoke a sense of canonical permanence. As a result, these ‘new monuments’ demonstrated for Smithson the material principles of entropy, and like his own Spiral Jetty (1970), they were built against time. In a diagrammatic sense, de Buitléar’s handling of materials echoes the “backward looking futures” of Smithson’s new monuments. The consistencies of de Buitléar’s marks staccato with interruptions in the paint’s distribution. In instances where the paint is drawn too thin, the unforgiving black void peers through, placing this humble and measured chiaroscuro into a state of dynamic and entropic precariousness.

Moving away from the flatness of the canvas, we are confronted with a sculptural iteration of these recurring pictorial forms – a small, geometric sculpture, 3D-printed in incremental layers of white acrylic. It isn’t long before the imagination adds scale and dimension. With ease we can conceive this sculpture as an architectural model for some much larger intervention in the landscape, something like Will Insley’s utopian architectural project ONECITY – one of the new monuments cited by Smithson in 1966. With Insley’s structure in mind, subterranean and hidden expansions of these forms suddenly seem conceivable beneath plinths and behind walls. It’s as if the sculpture generates a renewed viewing of the paintings: with some new-found topographical character, they seem to map seismic trenches scarred deep into the surface of encounter. This sequence of engagement seems to be imposed through a practical necessity though, rather than direct artistic intention. The exhibition’s cohesive thrust, overall, remains formally lateral, rather than sequential. Understated but monumentally resolute, ‘Push and Pull’ ensures – much like the spooling marks contently dancing the circle – that the emphasis returns, over and over again, to the form.

Philip Kavanagh is an artist and writer based in Dublin.